Skip to content
First we need a little bit of background. Years ago, Grandma and Grandpa Lane (my mother’s parents who live in town about 3 miles from here) planted an apple tree in their garden. It’s one of those that had several different varieties grafted on to it. I’m not at all sure it has ever produced, but I digress. As time passed, it became clear that this tree blocked the water from the sprinklers from reaching a significant portion of the garden. So, Grandma and Grandpa went back to watering with a mobile sprinkler attached to a hose. But, now more time has passed, and Grandpa is no longer with us, and Grandma can’t drag hoses around so good anymore. Last summer, Steve told her he’d take that tree out so her sprinkler system would work again. Winter came and went, along with the dormant season for the apple tree. I’m sure you can see where this is going. No, the tree did not get moved. Now, Grandma is ready to start her garden for the year, but with the lingering effects from a Christmas-time shoulder injury she definitely can’t drag a hose around to water the garden. So, Steve is moving the tree – today. Yes, it’s a bit late, and yes, the poor thing has leafed out. So, he’s leaving a root ball intact.

Now, after 16 years of marriage, I know we don’t necessarily have to discuss every tiny little thing, but it was a bit disconcecting to arrive home and see the following scene in the front yard.

Upon closer inspection, I see that yes, yes that is hole in the yard. No, it’s not a big hole, but it is a deep hole. 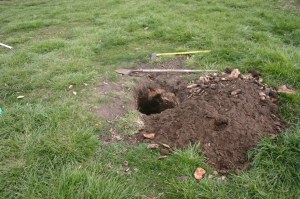 After a few minutes of head-scratching, it dawns on my that this is where Steve intends to put the apple tree! The apple tree that he is as this very moment removing from my grandmother’s garden, and that I thought would be going into the orchard. Yes, I know – silly me. OK – let’s put aside for the moment that we have not discussed where the tree would go, and the fact that I am not at all certain I want a little dwarf apple tree in the front yard. Because there is a much bigger issue at hand here. I’ve just come from Grandma’s house, and I’ve seen the root ball on that tree. It is much much wider than this hole.

He has taken our nephews (ages 14 and 16) back to town with him to get the tree into the pickup. I’ll try to document the effort to fit the root ball into that hole. I have no doubt at all that he will make it. I just am not sure he’ll get it in place before dark (it’s 4:45 now).