We have slowed down for the last week.  Annmarie is getting ready for a new school year at the college and Sarah has started her senior year in high school.  I have started planning an elevated garden for our 89 year old grandmother who lives in town.  Ruby has conceded that keeping up with 600 sq ft of weed opportunity is too much.  We are going to tear out a small nonproductive apple tree, rhubarb and some creeping thyme, cover it all with ground cloth, set out 8 various sized 2 feet tall stock tanks and fill the rest with pea gravel.  The hoe will be replaced with a gallon of roundup.  This project starts first of October.  So only five more weeks of roofing on the barn.  We are running out of money for the roof any ways.  I am going to spend this holiday weekend roofing.  I believe we can get half the roof done.  It will take another day to finish the cupola then three days of laying tin.  The cupola will have taken five days to build.  Not all those days were full days but they were days where I just could not be on the roof any longer.

I have about two more days of fencing to throw in there also.  The bull is still getting out of the fences!  It is obvious he is lifting something because the sheep cannot get out.  I need to fix the lower orchard creek crossing and the ram pasture/barn lot dividing fence and that creek crossing fence.  The sheep are violating those holes also.  The fence is not doing its containment job. 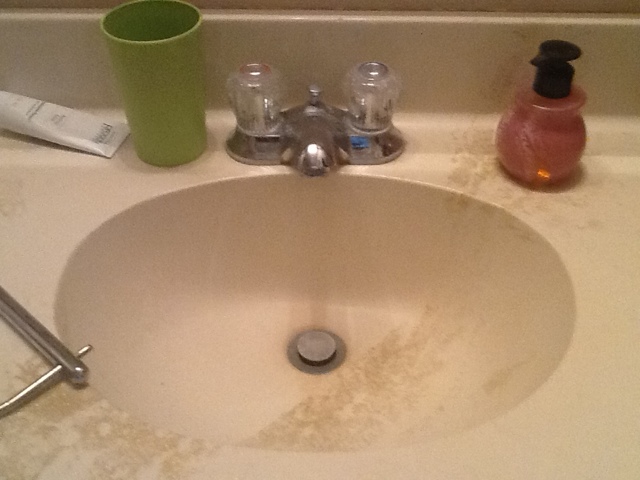 I did manage to get our new bathroom faucet and drain installed over the weekend.  The old one would shut the hot water to a trickle when it got too hot.  This new one works great and matches the bathtub fixtures. 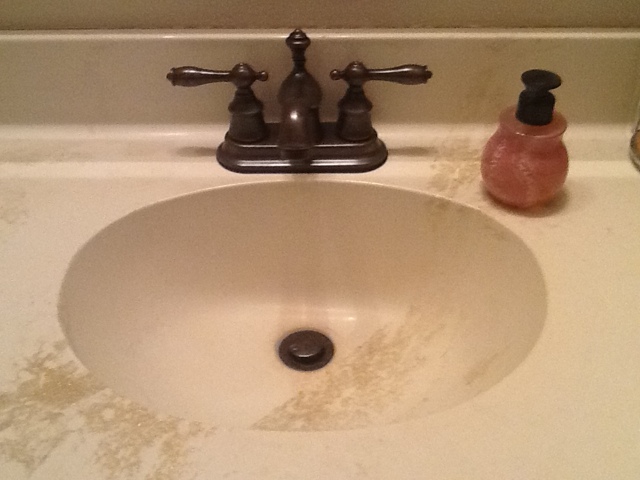 We were tidying up, and Steve stumbled upon this poem he penned a few years ago.  He’s since moved it back to the kitchen table every time I move it off the table, so I’m inferring that he would like it to be immortalized somehow.  While I work out that how, I’m putting it here so it doesn’t get lost.  So, for your enjoyment……

An Opportunity
by Steve Hardin

Steve’s been doing so much work he’s having a hard timing keeping up with the blog entries, so I’m helping out a bit.  We’ve actually had quite a bit going on this summer.  One of my goals for the summer was to give the kitchen an update.  I was tired of the orange Formica.  Just for a refresher, this is what the kitchen has looked like since we moved in.

We weren’t quite ready to bite off the cost of new countertops, and besides, the countertops were fine, other than the color.  They are solid wood and actually still in pretty good shape – other than being orange.  So, we decided to take a chance and used a paint-on treatment from a company named Gianni that is supposed to mimic the look of granite.  I am not known for my artistic abilities, and this was one project that I actually mostly did.  Sarah helped with the base coat, and Steve did the final clear coat, but I did the part that actually shows and make the pattern.  To say I was nervous would be an understatement, but I am actually quite pleased with how it turned out.  This is what the kitchen looks like now.

Even the yellow cabinets look better with the brown granite instead of the yellow.   I’m not sure how well it will wear, but the cost was incredibly reasonable, and the appearance is so much nicer, that I’m willing to baby it along.  We’ll invest in a few cutting boards to serve as trivets and to be continually handy so that nothing damaging is set on the countertop, and since standing water is a no-no on this surface, the dish drainer will not get to live on the counter.  This does not make me sad.  This winter, we will tile the backsplash and around the window.  I’m very pleased with the current state, but am also excited to see the final outcome this winter.  Stay tuned.

On top of that, progress on the barn continues slowly.  Steve has changed his plans a bit on the cupolas.  The new design will take a bit longer, but will be more aesthetically pleasing.  In his heat-befuddled state last week, he made a truly regrettable comment to me that led to some discussion of his plans on that day, and followed by a noticeable and intentional avoidance of the subject on my part.  Yesterday, he announced that he would be putting wood siding on the cupola.  His previous plan had been to wrap them in tin, which would have made them match the roof, but be ugly.  I was not impressed.  The downside of his new plan is that each cupola is a four-day project.  He figures they will finish this first one before they have to move on back to the tin.  Then he will put a temporary cover over the second hole to get us through the winter.  The barn will officially become a three-summer project, but should be finally finished next year.

Won’t that look cute when it’s all done?  Just envision it with a neat weathervane on the top, and a twin where you can see the hole in the roof.
The reason Steve’s having a hard time keeping up is that he keeps working.  The upside of that is that they occasionally fly over the house and he’s gotten some really great aerial photos of the place.

The chicken door is on its way to get repaired.  I have it so I only need to unscrew two screws and unplug it and it is out of the hole and ready to go back for repair.  I am continually amazed by the gentleman who built the door, he just keeps fixing it!  He always wants to know what went wrong and how he can improve the door.  I am pretty sure he doesn’t have an actual business selling chicken doors, it is just a hobby.  He sounds like a tinkerer.  Hopefully, the door will be back in a couple of weeks.

I am going to go out tonight and lock the chickens in.  In the morning I can thin out the deadbeats, I think there are an even dozen chickens that between them all they collectively lay 1 egg/day.  In a month those 30 eggs cost me around $22, not quite a dollar an egg.  I will get more accurate numbers after tomorrow.

Jason, Gannon and I went out this morning to work on the barn roof.  I took a starting picture but things did not go smoothly.  The roof angle is very steep and hard to work on.  We had a very hard time folding the metal over the edge of the roof and screwing it down.  It took a few hours to just get the edge pieces in place and screwed in.   Once we got to the cupola area the consensus was we should switch sides and just work the whole barn from one side to the other so we don’t have to keep coming back and screwing down the safety harness anchors.  It is 16 feet to the bottom of the roof.  I only have a 16 foot ladder.  This is not going to work.  So now I need a taller ladder.  We went down and spent 75 minutes trying to do some 90 degree trigonometry to get our measurements for the cupola correct.  I didn’t take enough when I was up on the roof and no one wanted to go back up on the roof.  Annmarie was not home.  She showed up and had it straightened out in 5 minutes.
We cut out a cupola frame today.  Tomorrow we will install it.

Well we managed to get the horse feeding area completed today.  Gannon and I have worked on it the last two days.  We tightened and patched the old side with the material salvaged from the end we cut off.  I dig it down with the tractor so it should drain away from the barn.  The same goes for the runoff from the roof now.  It should just drain down to the back creek.

There was a pause at lunch time to go get the bull again.  He is still finding ways to get outside the fence.  He lifted the panel down near the schoolhouse.  Gannon and I had pounded some metal posts into the side of the creek to keep him from pushing the fence out easily.  I cannot put them in the creek bottom as this is a spring runoff creek.   It is dry now but it won’t be that way in the spring.  I wired the panels to the fence posts so he cannot just lift the panels with his horns.  We will see how long it takes him to get out now.

I had needed to fix the barn door entryway where we enter the sheep side, as this is where the newborn sheep have been falling out of the barn last winter.  Gannon has been digging out the old milk cow area (we had sheep there year before last).  Which means I needed to install some steps to get up into the barn.  We used the old pallets I had laying around and made a set of stairs to get into the barn.  I also screwed in  a board so the newborn sheep cannot fall out of the barn.

One of the things I still want to fix before winter comes is the two doors on this end of the barn near the new horse enclosure entrance.  They need to be redone.  I think I can salvage about half the door but not sure I have enough old wood to make it all out of aged wood.  It sure looks better when I can do that.  I did measure the openings before I started and thought I had two identically sized stalls.  It doesn’t look that way in the picture.  My center post is at 7 feet 7 inches from each wall.  At least that was were I measured from before we dug the hole for the rock and got the post on it.  I never checked after that.  I didn’t want to know as I was not going to change it again.

Gannon still needs to finish digging out the old milk cow area but the steps look great and work awesome.   We will start putting old metal roofing on the barn next week.  This side can be done relatively safely.