We had some friends need the services of a small bull.  They have a different breed of small cow, not Dexter, but didn’t care about the breed as long as he was friendly and not too large.  Ours is friendly, definitely not overly aggressive.  The plan was we would trade a ton of hay and they will keep him all summer.   This works out perfectly as I don’t have to battle him all summer about the fences and every weak point I have missed.  We did warn them that he will test every gate and creek crossing cause he knows they are weak.  They assured us that was not a problem.  They have already had to repair one area of washed out fence they knew about but had not gotten around to yet.  He found it and got out!

We chased the bull and mommas into the barn lot before they got here.  Zeke and I just went out and chased the cows in a circle all the way into the square pen on the first try.  Once they were in the square pen I tried to entice the bull over to the chute with an apple but he was just not buying it.  Plus, I did not like standing that close to all the mommas and babies as the females were starting to give me the stink eye.  So we then chased out all three mommas while I used the square pen gate and then ended up with two babies and the bull in the pen.  I just pushed the gate in towards the animals and made a crack big enough for the calves only and they squirted right through.  We just encouraged the bull down the chute and he got to the trailer looked at it and just jumped in!  We had him loaded and ready to go in less than 20 minutes!  It was amazing.  It looked like we knew exactly what we were doing.  Annmarie, Sarah and Gannon had spent 2.5 hours two days before trying to get those same cows into the barn lot.  Zeke was not helping them and the cows and calves could not get on the same page and kept getting separated and running off.

Next week we will have to run the mommas into the square pen and chute and band the little babies and ear tag everyone.  We should be okay working from the other side of the chute.

﻿
Here I am again, behind on the blog!  I know I said I was going to do better, so this is my apology and I will “work” on it.  We are still trying to get rid of sheep.  So far we have sold or given away zero sheep.  We have fielded calls from five different people and have one reserved for late fall slaughter.  One person wanted forty sheep from 50-80#.  Ours are not all that heavy. We had a call yesterday from someone in California that wanted 150 sheep.  We don’t have that and if we did we would not be selling them for $50.  The price would be higher.  I still have four separated out in the barn lot.  We had someone call from Boise who was going to pass through town and wanted to come by and get 3-4 sheep.  So Zeke and I sorted out five sheep.  One of them managed to get through the fence, but the other four are still there.  They have been on their own for five days now.  I am going to put them back in with the herd soon.  I am trying to get them sold to a local friend.  This happened last time we used Craigslist, it sorta worked last time but for every ten calls only one pans out.

We currently have two herds of sheep on the property and I don’t see that changing as long as we want to slaughter any females we need to keep the ram away from them so they do not become pregnant.  I have not started on the barn roof yet, soon, very soon. 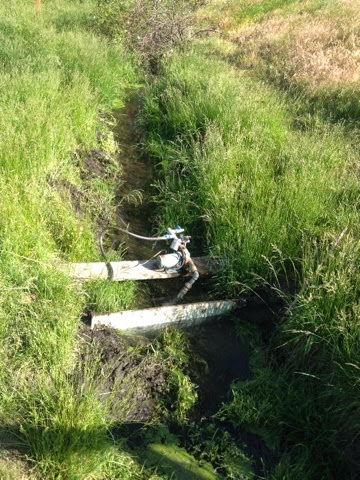 The pump is back in the front creek.  I tried to dam it up with a board, but I dug the bottom of the creek out too much so it kept going under my board.  I finally just took out the board.  I had dug the hole so deep I don’t need the board to dam it up.  It is working fine and we have been pouring water onto the orchard.  It looks great!  There is hardly any cheat grass or weeds.  Now if only the other pastures looked like that.  This saves our well system not having an extra load on it.  The back creek is no longer running.  It still has plenty of pools along its length but it is not running.  So the snow pack is gone.  I was hoping it would last until July.  Winter was so cold last year we lost all the wild blackberries.  It killed them down to the ground.  They are starting to make a slow comeback, but we have some large dead patches all over the farm.  The birds don’t seem to mind. 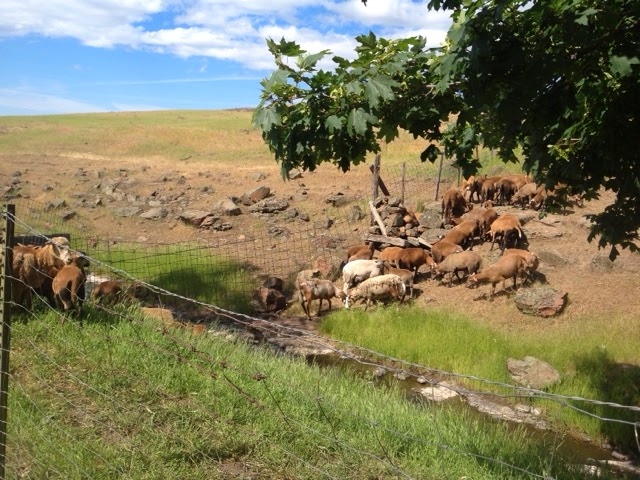