It figures.  I finally get the chickens laying and am able to sell all the eggs we are collecting from our true free range flock and the big bad chicken predator comes in to destroy my plan.  While I was off at work the nasty predator came in and started killing my chickens (graphic picture to follow).  Now mind you I have been just letting the chickens do their chicken thing.  I never lock them up at night, they come and go as they please and whenever they get tired of free ranging for feed they can come back to the coop and get the free – all you can eat buffet.  A good life for a chicken if you can get it.  My only problem with this scenario is predators.  Now that I have the cat issue fixed, I still have to deal with the wild animal problem.  I have the electric fence running around the top of the coop run, but that only works when I shut the door. So tonight, I shut the run door, and I even shut the coop chicken access door and used the latch on the door in case my perimeter electrified fence was breached!  I also set up the live trap.  I used a dead chicken wing as a plate and poured cat food on top of it.  So as I am sitting here typing my post, both Annmarie and I start smelling skunk.  So I grabbed my boots, Walther p22 pistol with laser sight and a large bright flashlight to scope out the coop action.  I walked all over and all I found were 3 cats.  One of them got lucky, he was hiding behind a rock crib and I had to put the sneak on.   It was just a cat, Indy our inside cat.  I have learned to not shoot first at night, gotta have a positive ID before I pull the trigger.  On top of it all, I am going to have to borrow my father’s weed eater tomorrow (I killed two today at my wife’s grandmother’s house.  different story) to clear a kill lane around my chicken yard so I will have a clean shot at whatever is killing the chickens.  And I really need to get the ram pasture fence completed because the sheep are running out of forage in the barn lot.  It just never ends.
Here is my poor defenseless dead chicken.  I did not include the two different piles of feathers I found.  insert warning here courtesy of the spouse, not for the weak of stomach. 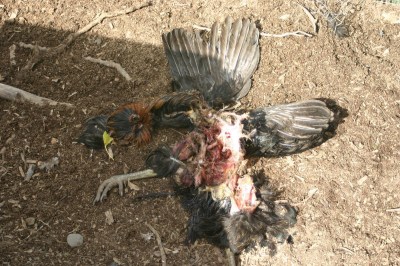