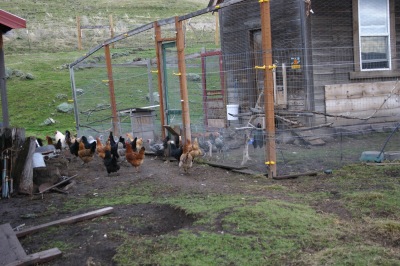 I had every intention of an easy day today.  I picked up a premium shift at work yesterday so didn’t get home until this morning.  It was a long and stressful day.  I didn’t think that it had effected me much till I went outside to do a little work.  I went out to thin out the roosters.  Sarah is the main chicken wrangler and she was busy elsewhere.   So I had to do it.  Even with them in the coop it is not easy and all those chickens together just getting agitated as I attempt to grab a hold of a rooster who then starts squawking incessantly until silenced.  I finally managed to get six extras leaving 2 roosters alive, unfortunately when I went back outside later with Sarah she pointed out a third rooster.  Maybe it is a rooster, the color is right but the tail is mighty small.  Sarah thinks it is because everyone was picking on that bird.  A couple of weeks will prove one of us right.  A couple of the hens have started laying eggs in the wood shed again.  Just one more place to check for eggs.  A friend of ours made some wooden eggs for the chicken coop laying boxes.  I finally found them today in a bag stashed by our child.  I have them by the front door so I can take them out to the coop tomorrow.  I am hoping to entice the wood shed hens back to the coop.

I needed to go up on the hillside with our pickup.  The first problem with that is it has been about six weeks since I have started the pickup.  Yep, it didn’t want to turn over.  I crossed my fingers and tried again.  Holding the starter for 15 seconds before the engine finally caught and took off.  This meant I needed to go on a small drive to recharge the battery.  The pickup kept dying every time I let off the gas.  Killed it 4 times before I got to the end of the driveway.  So I drove it about 8 miles and then decided to use the field entrance at the top of the hill.  It is very wet and muddy here and I didn’t want to make the ruts in the barn lot any worse than they already are (the rancher leasing the fields feeds every day and the rut just keeps getting deeper.  This necessitated me cleaning the weeds out of the barb wire gate.  Up on top of the hillside I saw a band of mule deer (around 20 animals) and a rarity for us I saw two chuckars.  We are a little on the small hillside order for the chuckars but I do spot them occasionally.  It had been over a year since I had seen any on the farm.  I passed a large pile of old rotten wood .  I cleaned out the bed of the pickup (leftover hay and sheep poop) while I was at the bone yard.

On the way back down I stopped at the pile of rotten wood and spent a whole hour tossing the pile back together as it had been spread out over the last 30 years!!  I need to put some flame to that pile.  I noticed two more piles down below that need to be burnt also.  Since, I have decided to redo the bridge I need rocks, lots of large rocks (which we have in spades on the back hillside).  I want to face both sides of the bridge with large field rocks.  So I stopped and pitched a pile of rocks in to the back of the pickup.  I did not fill the back as the rocks got very heavy quickly, almost exponentially heavy the more I threw into the back of the truck.
On the drive up the driveway I spotted three more piles of scraps and twigs/tree branches that need to be burned.  I emptied out the pickup in my “rock pile” area and went inside to get the child to go do her outside chores.

We ended up enticing the sheep into a pen so we could catch the two little male babies so I could rubber band their testicles (castrate).  I tried with the littler boy first.  I could get one testicle in but the second one kept falling out and hiding in the belly.  I tried poking the belly to get it to pop out.  No such luck.  In the end I just let him go.  So onto the older baby, which went much better.  More to hold onto and much easier to tease both testicles through the rubber band and then it was done.  He laid on the ground for about twenty seconds then ran over to his mama.  The rubber band is tiny and thick , there is a special four prong pair of pliers that stretch the rubber band out so you can slip it over the scrotum.  So I will get the other baby in a week or two when things are bigger.

You never no what life is going to throw at you.  So take it day by day and cherish those days as if they were your last.

One thought on “Thoughtful day”