Jason was here early this morning so we could try and beat the heat on the barn roof.  We got up onto the low portion of the barn roof and discussed how to get up the next 16 feet to the peak.  There was an old rickety falling apart wooden ladder barely attached and I suggested using it.  Jason didn’t seem real keen on the idea.  We didn’t have safety gear on yet because the anchor needs to be attached to the peak of the roof.  He went to get the tractor so we could throw a rope over the roof and tie it off to the tractor.  While he was doing that I crawled up the rickety wooden ladder and made it to the peak.  We attached our safety harness hooks to the peak of the roof and then tied in.

We took down all the peak ridge metal and then tore out the hay turbinators.  Jason cut out the four vent holes and we are ready for metal roofing.  It was a collective agreement that I will have to rent a boom to do the far side of the barn.  It is just too steep and we need a way to bring up the cupola pieces.  So I am going to have to price out the rental on a boom. 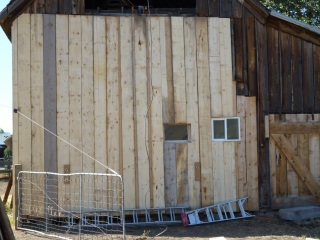 While Jason finished cutting the holes in the roof I patched the side of the barn.  There were several holes from the woodpeckers and I cut tin to fit and attached them to the barn.  Only one hole had an old nest from this spring.  I had been wanting to get that done since last year.  At noon we were burning up from the heat and decided that putting on siding was better than being on the roof.  So we moved to the front end of the barn and put on the second layer of siding.  We only have two pieces left and the front of the barn will be done until winter.

I want to redo a couple of boards over by the honey bee nest and redirect them to a higher entrance on the barn wall.  This will have to be done when the bees are dormant as I don’t want to get stung 50 times.  We even put in horse tying anchors on the side of the barn for Annmarie. It was over 100 degrees and miserable.  We each drank over a gallon of water and lost five pounds.  The latch we found for the gate had a previous life as something, we just are not sure what it was.  It works great and I just need to attach the chain better to hold it up higher so it is easier to put on the gate.