It is amazing how hard it is to keep up with the blog, something else always comes up.  I have been meaning to stay current but there is always something else.  Work is getting in the way of my farm time recently so that is the current excuse I will be peddling.

I started working on the close fence where the two unweaned calves are isolated as one managed to get through the very first night all three were in the orchard.  I have been retightening each strand and installing tamarack stays between all the metal posts.  I spent two solid days and only have one section left.  It looks great, but it is not helping my milk nursing problems.  The stupid momma cows go right up next to the fence and let the 300# babies stick their heads through the wire and nurse!  I have started using Zeke to chase the mommas away from the fence.  He loves it but the mommas absolutely do not.  They keep trying to stomp him or get him with a horn.

I am pretty sure I found the spot where the escaped calf got through but it needs a couple of metal posts pounded into the ground.  This is hard to do when the ground is frozen.  It will have to wait until we get a few days of not frozen.  I only had a few metal T posts left so I went to the metal salvage yard and picked up 70 second hand posts for $2/each.  A great price, I just have to work each one through the metal vise to straighten it out.  The trick is to not take any that are kinked.  They will instantly bend at that same spot when you try and drive them back into the ground.  I would like to get about 250 more.  Unfortunately, I took every one that was salvageable.  So I am always on the lookout for some good used T posts.

Our upper fence got torn up when someone ran a car through it earlier last month.  It is repaired now.  That was very nice of them to fix their damage.  I just need to go install some tamarack stays.  There are not any wooden stays just some of those twist on metal ones.  Those are useless and not worth the $0.80 paid for each one. 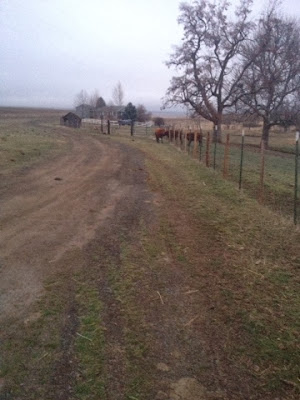 We had our large tree up by the hand dug well fall down.  Mother nature sneezed very hard one night (over 65mph winds) and the tree just could not stand up any longer and blew over.  We loved the tree because the red tail hawks raised a new set of babies there every year.  I saw the hawks last week so we are hoping they will move to another tree.  None will be as tall with that open view.  Our front trees are taller but have all their leaves with no upper dead branches.

When the five tons of hay was delivered it came on a large flatbed trailer.  The kid driving it could not get into the barn lot.  The ground had thawed out and with five tons of hay on the trailer and some slick mud he just could not get into the barn lot.  All that work to rearrange the hay in the barn for naught!  I had him back up to the machine shop and we unloaded it into the tall side of the machine shop.  He said it would take us 20 minutes to unload.  It was closer to an hour, ahh the exuberance of youth.  We just put up a cattle panel to span the 16 foot opening and attached it at both ends.  This sounds like a decent plan but the bull had other ideas.  He hooked it with his horns and laid it down and pushed up against it to reach the hay pile.  The cows had an all you can eat buffet on three separate occasions.  There are now three large metal T posts running across the opening now, courtesy of my nephew.  I can no longer back the pickup right up to the pile, but not having the cows in it tearing it up is well worth the price of carrying a bale of hay.  If there is any hay left in the spring it will get moved to the barn.