Skip to content
It has happened again, I have started with another teenager. I had told his mother we would fence but by the time he arrived last Saturday morning I had changed my mind. I had managed to get the outside fence secured so the animals are not escaping. I really want to enclose the new upper prime squared area but it will take me 40-60 hours to complete that fencing. That is a huge time commitment for four acres. Instead, I voted on actually getting ready for winter. The young Padawan was dropped off at 0645 with his father apologizing for the early drop off. I told him no problem and did not tell him I usually make them start at 0500-0530 during the summer. The Padawan is only 14 so he cannot drive.
I drug him inside the house and asked him what he had for breakfast, “cereal” was the succinct answer. I was cooking breakfast as I had expected him at 0700.  We were having fried side pork and fresh farm eggs cooked in same grease pool pan that the pork was cooked in. He denied hunger. I went on the presumption that he was a teenage boy and can eat any time no matter how soon a meal was completed. He drank hot chocolate while I finished. He didn’t know what side pork was and he picked gingerly at his two eggs upon their sudden arrival in front of him. AnnMarie asked me if I had asked him if he even wanted food. I gave her the look “he is a teenage boy”.  He tried the pork and eggs. By the time I finished my breakfast he had consumed all the food in front of him. He was very polite and even offered to rinse off his own dishes. AnnMarie gave him the requisite speech about making me stop for lunch when he got hungry or else we would work all day with no lunch!
We went outside to knock down the tumbleweeds in our driveway. I asked him if he knew how to drive. He stated yes. I got into the passenger seat as a precaution. I was hollering for him to push the break in the first five seconds of vehicle movement. He was turning into the car parallel to the pickup. Next was teaching him to actually look over his shoulder when backing up not just saying a Hail Mary prayer and going for it!  This concept took quite a bit of prompting almost as only using the right foot for the gas and brake. He managed to get the pickup over to the burn pile without adding a new dent.  On the plus side, between the numerous dents, dings and peeling paint I am not sure a new one would be noticed. I finished dragging weeds over to the burn pile with the tractor while the Padawan walked around picking up hay bale strings. We tossed loose scrap wood onto the burn pile also. I tasked him with parking the pickup back near our other vehicle. I did encourage him to hit the brake and not crunch through my fence and down into the front creek when parking. He did fine. The farm pickup is no worse for meeting him. 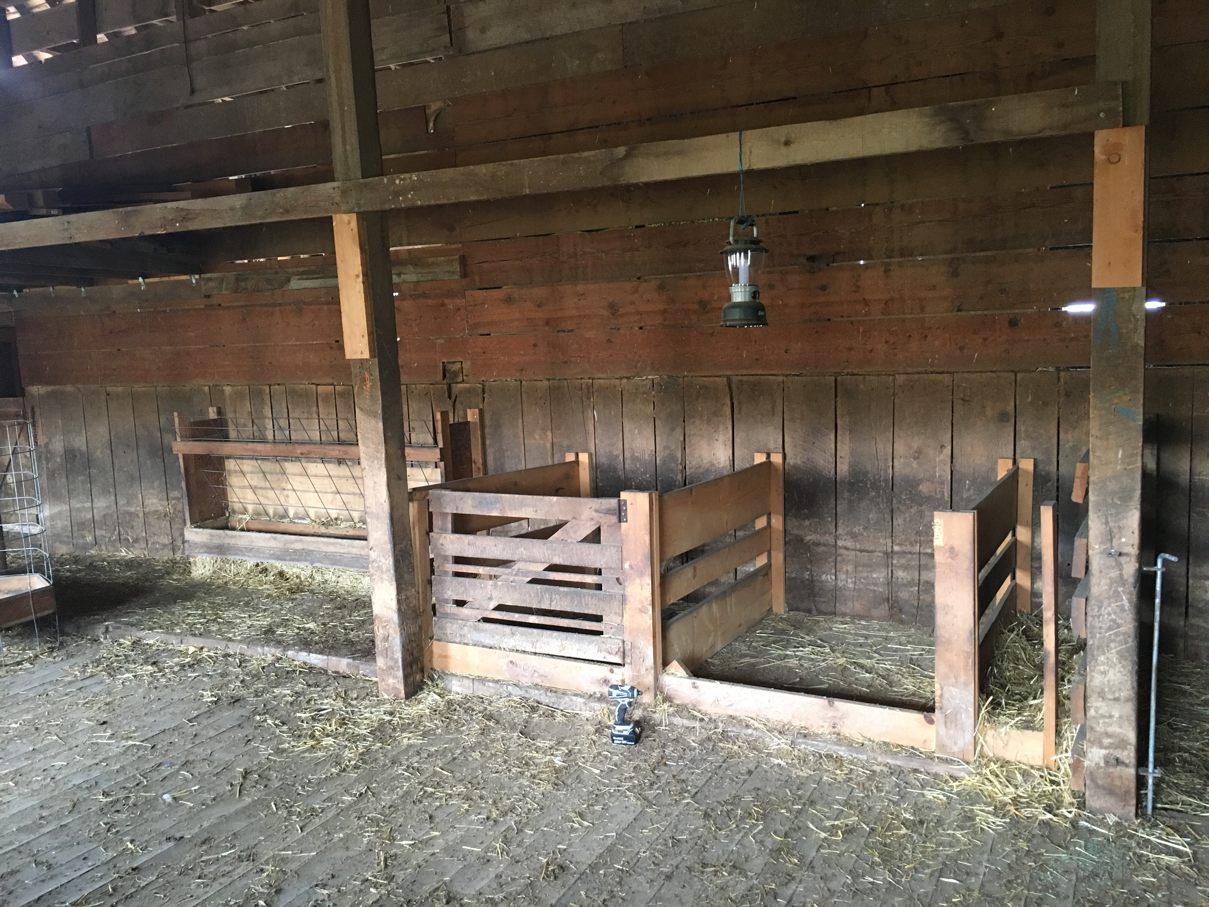 We went into the barn to get ready for winter. Since we will have another 21 sheep we needed more feeder space. We had agreed that the jugs needed to come out as we were using the momma/baby area instead of the jugs. We had lumber stacked on the jugs and had started to dissemble by the time I remembered to take a starting picture. The goal as always is to reuse as much as possible. I saved the intact gates. Those had come from the old lamb shed. A gate is hard to make and harder to make one that will last 40 years so I just store them for use in later projects. They are “barn ready and tested” which is vital when you actually use them. We got the jugs totally disassembled and then started building the wall feeders. I just build stuff!!  No plans just an idea in my head and then I just keep digging through the scrap piles to make old pieces usable again. I taught the Padawan how to use an impact driver. I only swapped out six new drivers the first day!!  He did remember lunch. We were inside by 1230 eating ham and cheese sandwiches.

We finished after an 8 hour day and he was disappointed we had not finished and moved onto fencing. I chuckled and told him we were close and had accomplished more than I thought we would.  He seemed excited to come back the next day to finish up the project!  He is also the only teenager I have had help me who could read a tape measure and knew what was a T square. Bonus points for the Padawan! 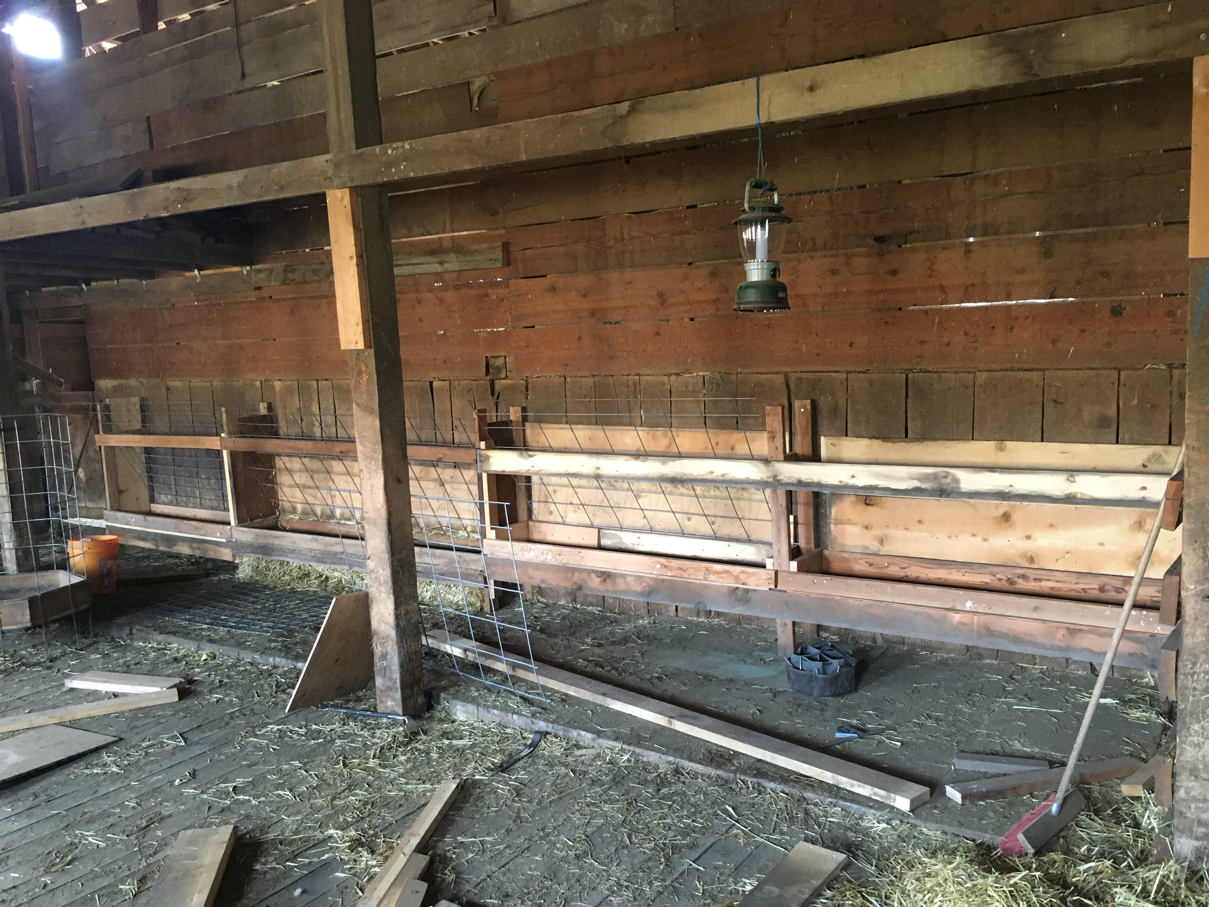