Skip to content
I had the brothers out today. I had gotten up early to make sourdough waffles. The sourdough was prompted by us buying a new crock for our sourdough at a recent yard sale. This idea was nixed once we figured out our current crock had kept the sourdough in great shape with no mold with us ignoring the batter for a solid year. So I added more flour and water and left it out on the countertop to use in the morning. I got up early so I could make sourdough waffles. I had the waffle iron out and was attempting to find a recipe when I realized I should of done the recipe the night before. We have an entire shelf of old cookbooks. There is a lot of material to sift through. I found one that substituted the milk for sourdough starter. I followed this recipe but it was for pancakes not waffles. Unfortunately, I followed the recipe and ended up with bread dough. I had to add about a cup of milk to get the consistency correct. This means I needed a different cooking device. I could not find our electric griddle so I used the electric fryer. It’s hard to turn pancakes in. They turned out good, definitely sourdough but a little heavy. Teenagers don’t really care and add in a couple of chunks of ham and they were happy. They seemed hesitant to eat more till I told them the chickens get to eat all the leftover pancakes.
The first item of the day was to sort off the cows. We have three young girls that need a few months away from the bull so they don’t become teenage mothers. We shut and opened gates so the cows could be herded into the barn lot. The horses did not want to leave the barn lot so they got locked into the old lambing shed. They can watch everything from there. We walked up onto the back hillside with the dogs running all around. Once we got to the lower pasture we could see the cows on the bottom near the gate and the sheep low in the hillside ideal positioning to get the cows through leaving the sheep behind. I told the brothers we would stay up on the hill and the dogs would do all the work. I did preface this by saying Mouse was still a puppy and learning. He needs the off leash work to improve. What a mess!  I hollered. I cajoled. I brought the dogs back and told them cows not sheep. Mouse finally got locked onto the cows but every time I looked away he kept sneaking forward. Zeke was the real culprit, that damn dog ONLY wanted to chase the sheep. By this time he had already chased them up to the top of the hill and out of sight yet every time I sent him out to circle the cows he ran up the hill!  Twice I brought him back and made him look at the cows. We talked about cows. I pointed him to the cows while giving a voice command. He was not listening, more like totally ignoring everything I said or wanted him to do. This brought about a colorful oral tirade of high volume and duration. I had to jump the fence and walk out and direct the dogs from a nearby position. This took me almost 30 minutes to get the cows out of the lower pasture. My voice was hoarse and my throat sore. Unfortunately, I may have taught the brothers some variations of the English language they probably should not know. I had to choke down each dog a couple of times. There are times they make me crazy. They are so pack driven as a pair that you must be at the top of the food chain or they think they are in charge and do whatever they want. It makes me crazy. Yet when they figure it out and do what they are supposed to it’s a breeze to move any of the animals.
We got the cows in and sorted. Our new yard fence caused the corral gate opening to get about an inch bigger. The gate no longer latches. I figured this out while trying to sort cows. We got the bull and a few heifers away from the little girls. The little girls and their mommas are in the barn lot with the horses. Unfortunately this only puts one fence between them. I need to add a 50 yard section to the lower hillside so the bull will have double fencing separarating him from the teenage girls. This will have to happen in the spring. I will never be able to drive any T posts into the ground until then.
As a side note Sunday morning we were looking at the cows out our kitchen window and AnnMarie asks me if that baby belonged out on the hillside. “Of course” was my instant reply. Guess who forgot that we now have a working gate by the horse feeders which was open and the gate leading into the ram pasture was open and the ram pasture fence is still down and cut up. So all the cows are back together again and need to be sorted yet again!  Some lessons are painful. 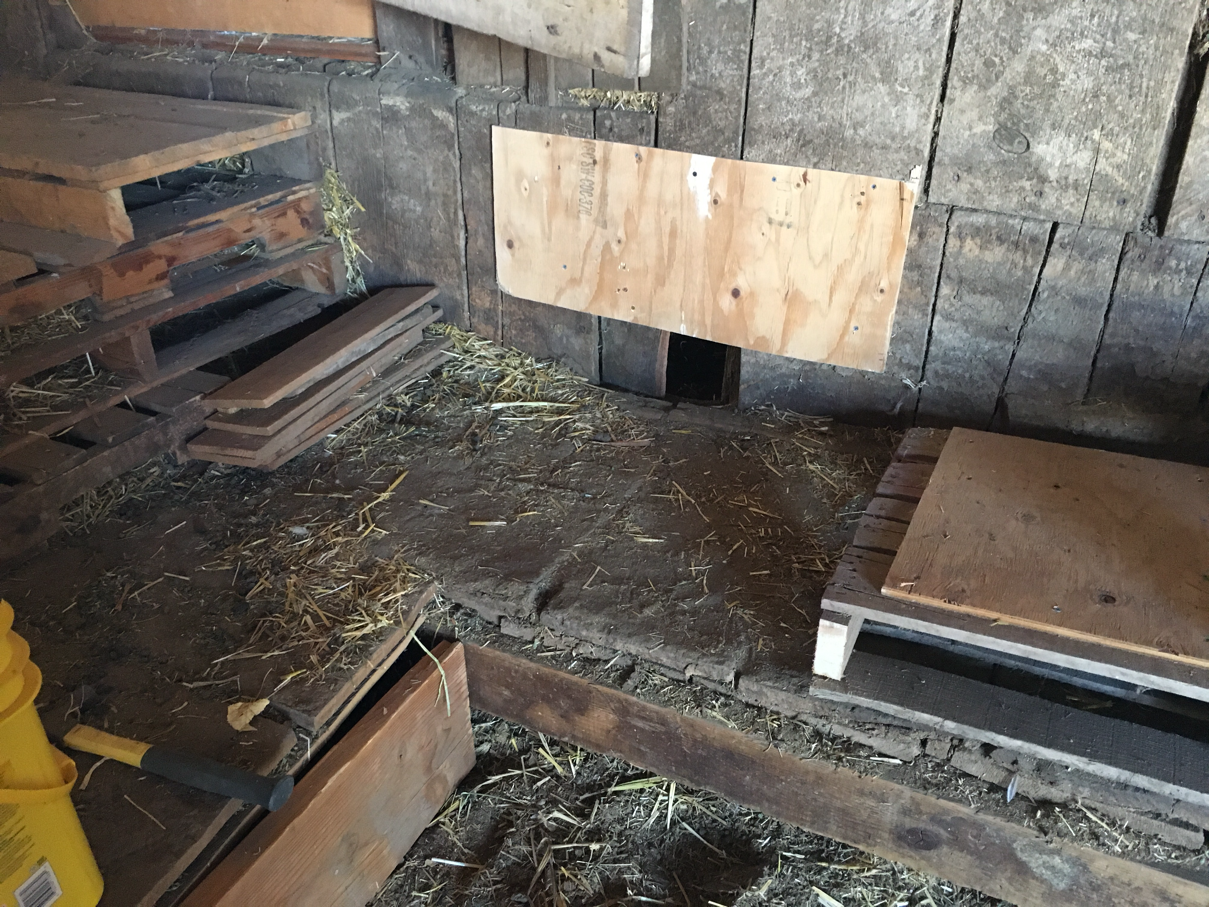 We then moved into the barn to finish getting it ready. The brothers spread out the old hay all over the floor to use as straw. All the tools were moved into the milking area. The dogs were in the milking area trying to harass the kittens. Mouse was digging under the walkway and Zeke was trying to enlarge the hole along the back wall  I had just made for the cats. We found some scrap wood and screwed it onto the wall to create a cat sized opening that the dogs could not expand. We also cut a 2×10 to create a face on the walkway so when I clean it out with the tractor I don’t push the mess under the walkway. This also gives another protected spot for the feral cats to hide. We have two feral fixed cats living in the barn. We are going to start housing them. Two weeks for two cats in a pen fed and watered them turned loose in the barn to live. We feed the cats in the barn daily. We need to get a handle on our mice population.
The pallet stairs for side door are complete and we took away the rope door tie and installed an actual metal gate latch. 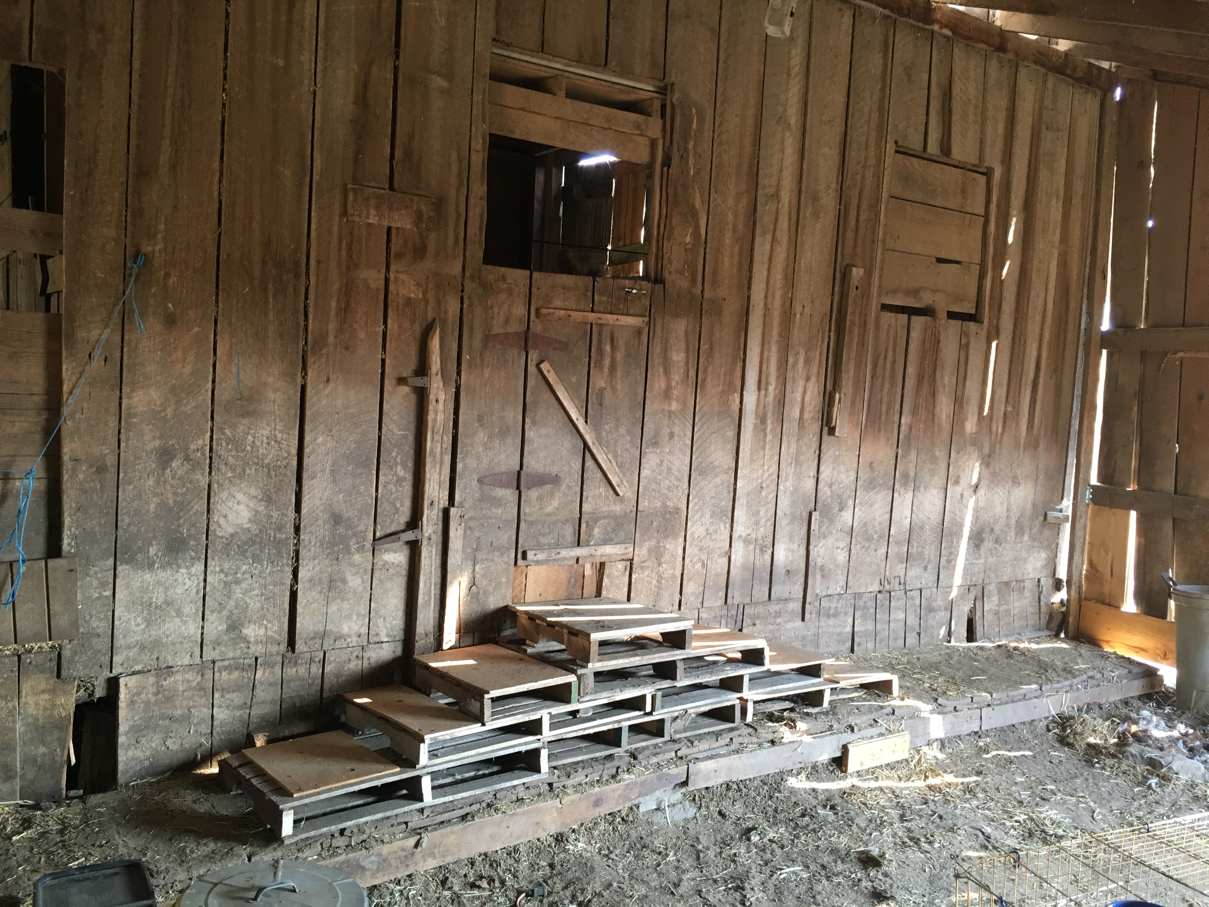 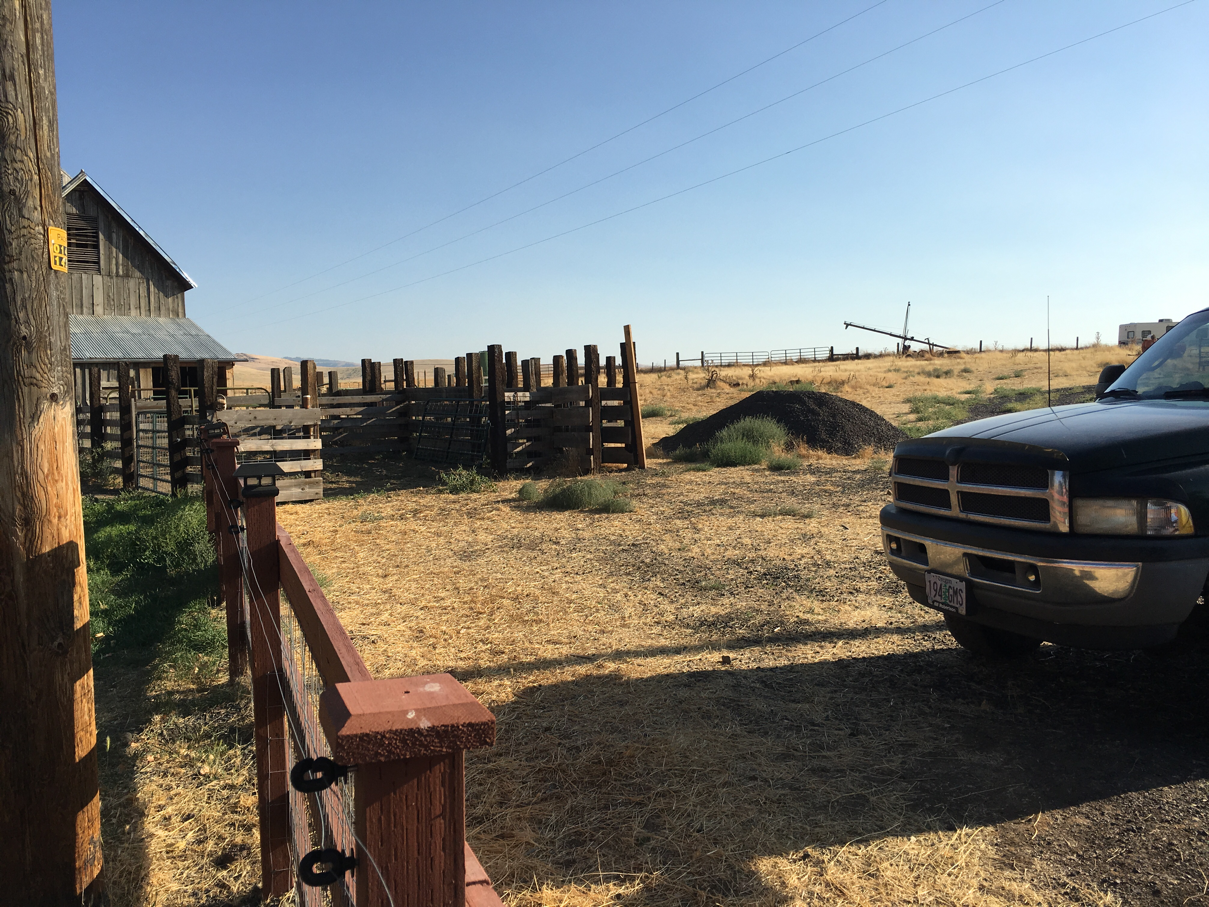 We spent almost 1.5 hours just putting tools away and cleaning up. I even put all the tools away in the old house!

It was hot and I was thirsty so when one of the brothers asked about the mini fridge I opened it up to show him it was just for extra egg storage. Low and behold there was a cold Gatorade in there!   I cracked that open and half of it down before someone asked me how old it was, 2012!  I polished off the second half in 15 seconds, smacked my lips and stated 2012 was a great year. No illness has occurred in the drinking of this expired beverage. I am thinking about stashing more drinks in this mini fridge!
Usually the tools make it inside the door in a big pile. I am still missing my cordless drill but I am pretty sure I broke it early this summer. The barn is rough on tools. I need to order another one.
We did a bunch of little projects.  We installed a new latch board with two holes so the corral is back in service. We covered three gates with wire panels so the sheep and baby cows cannot slip through the gates.
We picked up an entire trash can full of loose hay string from all over the farm.
We also removed our wooden trash can enclosure door and straightened the bottom hinge. It had gotten torqued in a wind storm several years ago. 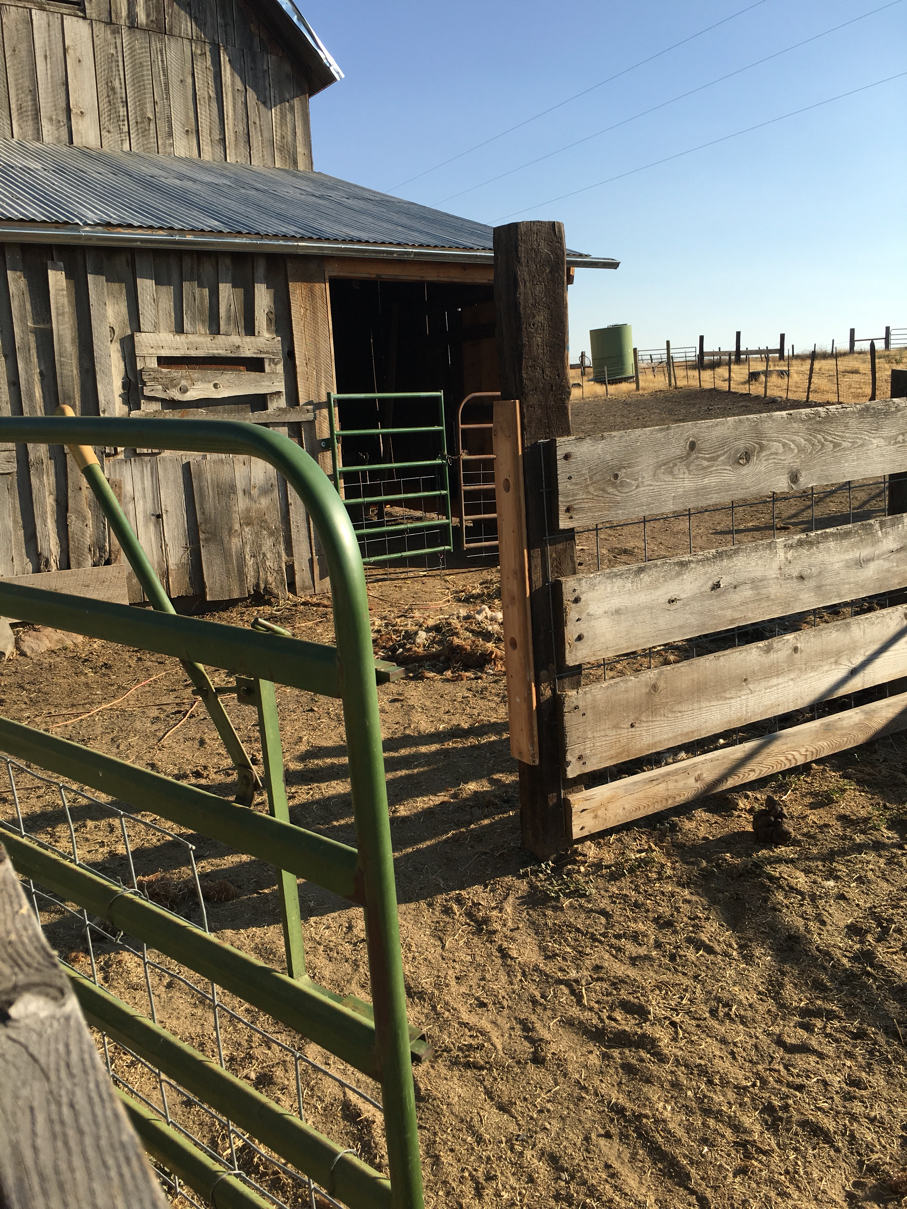 We installed a 3.5 inch ABS pipe downspout on the barn and then applied random sizes of wood in various locations to protect it from the horses. I am hopeful that this will stop 80% of the mud formed in the back alley way.
We did go check on the plums in the upper prime pasture they are really close to being done. I suspect 4-7 days is all I that is needed. 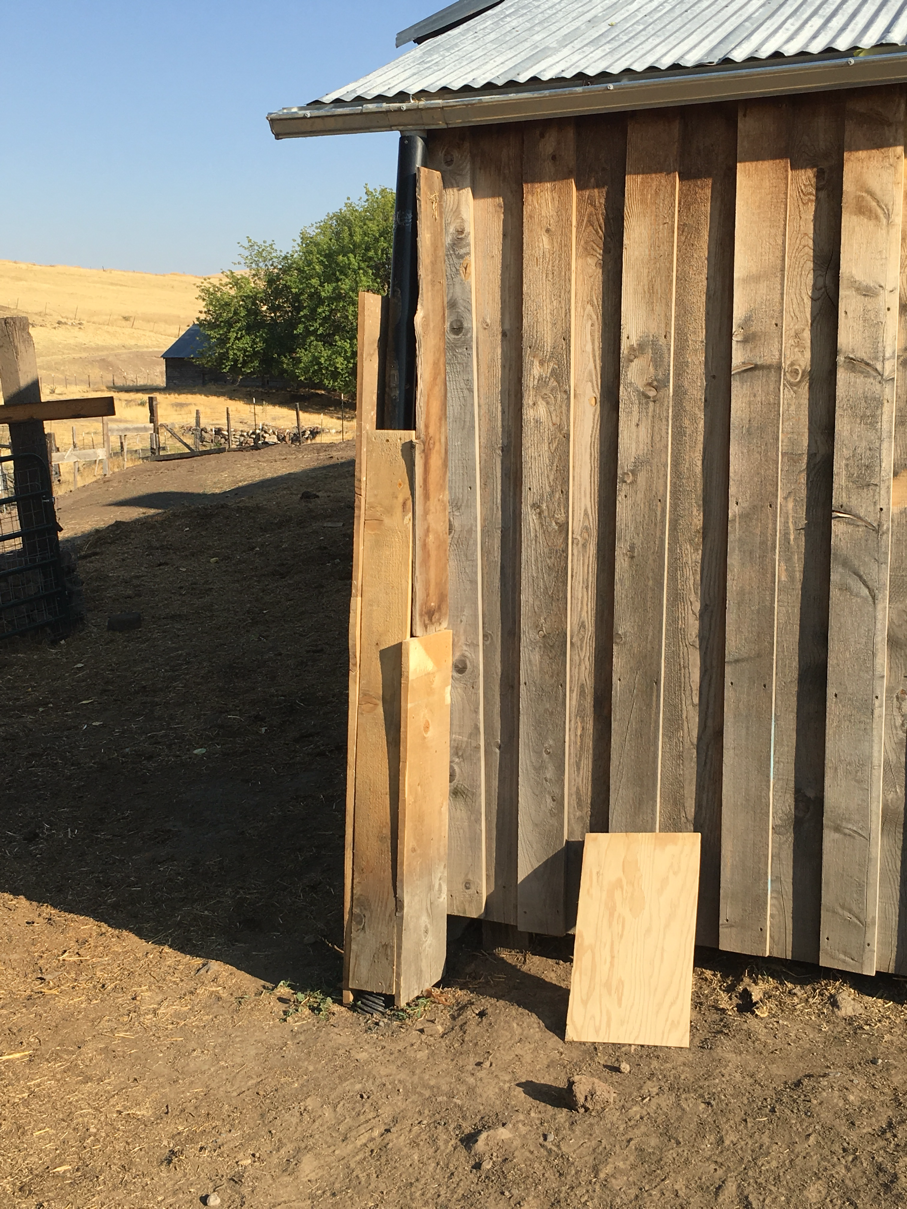 The boys ate Italian sausages on ciabatta bread with a plum for lunch. Good thing I had the 12 pack of sausages. I cannot even imagine what it is like to feed five teenage boys!!