The farm parts place came through in spades! My new driveshaft came in on Monday and I was able to pick it up that evening. Now it was 28″ and would need to be cut down but I had purchased a grinder that went with the new 60V DeWalt battery. It is amazing! There is no noticeable difference between the battery grinder and a plug in one other than pure convenience. Electric tools had to be able to get there eventually.

On Tuesday afternoon I cut the driveshaft, attempted to install it and had to cut another 2″ off to make it fit properly, this took a while. I was now ready to cut some hay!

This is me ready to cut some hay. I spent another 30 minutes on the internet and watching YouTube videos trying to figure out how to rotate the drum to behind the tractor for transport. I never did figure it out. Yes I read the instruction manual, but it was originally written in Italian and then translated into English. There were about 20 pages of how not to cut your hands or feet off because the mower blades are rotating. So this means I cannot go through narrow gates, it is possible but it does limit the gates that I can use.

I fired up the drum mower and started to mow in the cow pasture. I figured it was a great place to start and work out the kinks. Yes, there is a learning curve on where you can drive and how fast you can drive. After about an hour I started to hear this thunking noise. I finally stopped the mower, lifted it and waited for the blades to stop. The blades actually take about a minute to stop rotating and after hitting a rock and slicing it in two I figured out why the manufacturer had 20 pages of instructions on how not to slice off a body part.

There was a skid plate off of the bottom of one of the two drums that had come loose and was held on by a single bolt. Three bolts had already fallen out. I attempted to take a bolt out of the intact side but was unable to get one loose. So I had to take the loose one out, it came out with my fingers and then I went to Pendleton. Everything is from Italy, so it’s all going to be Metric. I had my fingers crossed and hoped I could find replacement bolts. I found 6, I needed 3 but they only had them in alloy not stainless steel like the ones that fell out. So I grabbed all the alloy they had and went home. I was putting the third one in when I realized something was different about the drum plate I was installing and the intact one. There were 14mm spaces between the bottom of the drum mower and the skid plate. There were no spacers when I found it. So, I had to go back to town and find something that could act like a spacer. I did and managed to get them installed. This is the loaner mower! 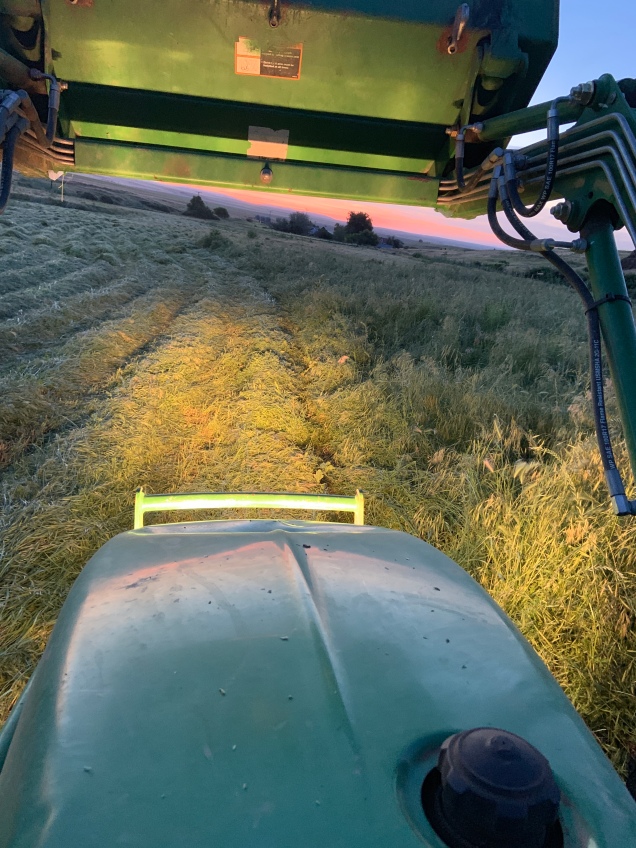 I started mowing again and just kept going until 2230 at night. I am definitely going to have to invest in some kind of aftermarket lights for the roll bar. There is 300# of antique tractor weight discs in the tractor bucket to offset the mower weight. So when I get the bucket high enough into the air to see with the headlights the tractor becomes very top heavy. I almost tipped it over twice. If I had roll bar lights I could keep the bucket closer to the ground and it would be much safer.

I came back on Wednesday and was able to finish both fields by 2100. So about 11 acres cut in 11 hours. Now I think in all reality that number could be 11 acres in 6 hours without the breakdowns and learning curve. Its supposed to rain.