I took the dead skunk up to the boneyard to drop it off.  It stunk something fierce.  Sarah refused to come with me, I offered to trade her jobs, but she wasn’t biting.  I drove the mile up to the boneyard and jumped out to empty the trap.  I lifted one end of the trap and attempted to shake the skunk out onto the ground.  It would not come out, so I shook harder.  Thing would still not fall out and the stink was all over me and getting worse.  So I turned the trap over and looked to see what was hanging up the body.  Damn skunk had sunk its teeth into the cage in its death throes.  Its jaws were locked onto the cage!  Didn’t want to get more stink on me, so I just rolled the cage around till it fell loose.  I then had to shake all the dirt out of the cage also.  It stank something fierce.  I didn’t want to leave the dirt in the cage, it was contaminated with smelly spray.  I hosed out the cage when I got back to the house.  Set the trap on the other end of the chicken coop enclosure.  For everyone who thinks I am cruel, the trap is less than six feet from my chicken enclosure.  The predators are choosing to die by scouting my chickens.  Just avoid the chickens and you will live a healthy and long life.

When I went out to lock the chickens up after dark and bait the live trap the moon was out.  I ran back in and took some pictures.  I noticed afterwards that I have something on my camera lens.  I cleaned it and tried it again.  Slightly better, but I still have a few spots that show up.  May have to take it to a camera shop if this persists. 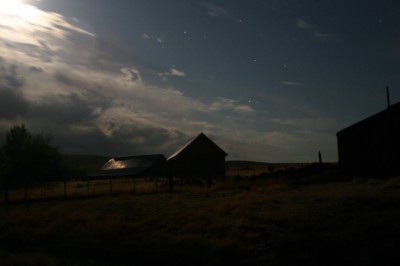 This is the old wooden grainary at night. hard to believe it is lit by moonlight only.

This is the tree behind the chicken coop.  It is amazing how light it can be with the moon.  I had to come inside and shower after dealing with the skunk and I still smell it occasionally, even now.

Dumb chickens only gave us 9 eggs today.  Definitely need to get that artificial light going inside the coop.