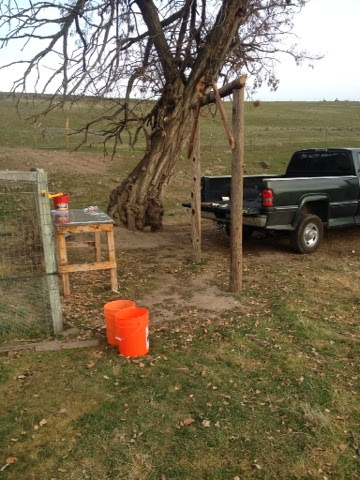 I sold some lambs to a fellow coworker.  He did not want to send them to the butcher as he had a way to cut them up himself.  I offered to help kill, clean and skin them.  Annmarie and I were very excited to be getting rid of the last four whethers.  He was busy and had a change of plans a couple of times so it took us a while to get our schedules synced.  The plan was 1200 the day after Thanksgiving.  He called me that morning saying he had to stay over at work till noon and could we do it at 1400?  I said sure but I have to quit at 1700 to go to my other job.  Sarah, Annmarie and I went out that morning and we sorted out four whethers and put them out in the new momma area.  I tried to stick them in the barn but they kept leaping over four foot doors.  Sarah and I set up buckets, knives and a bucket of hot bleach water to sterilize the stainless steel table and clean off knives.  My coworker showed up after only driving by then entrance to the place once.  We went to catch the whethers and the little boogers pushed by the edge of the gate and got out with the main herd.  We had to take Zeke off of injured reserve (he has a foot lac that he keeps pulling the stitches out of) and chase all the sheep back into the barn.  Once in the barn it was decided to just catch two whethers at a time and kill them immediately so we did not have to keep catching them.  I was game to try the technique of slicing the carotid arteries with a fillet knife without cutting the trachea.  Just insert the knife behind the trachea all the way through and turn it sideways so the animals bleed out.  There was no great spot so we just put them up on the ledge and hung their heads out the barn window.  This technique worked good until the last one then I accidently knicked the trachea and i ended up covered in blood.

We carried them over to the skinning pole and commenced with the messy work.  Trouble was it took us an hour to do the first part, so we only had two hours to go.  I am not a professional butcher.  I am capable but not quick.  At 1700 we still needed to finish skinning one animal.  I had to run in and get ready for work.  Sarah had to run to the boneyard and drop off a set of entrails so we could toss the second set in a bucket.  As she is driving through the gate I heard a crunch.  I was hollering across the field not to dent the new pickup.  We decided she should wait till the next morning to make the second trip to the boneyard.  She stayed out and helped clean up and carry carcasses to the vehicle while I got ready for work. 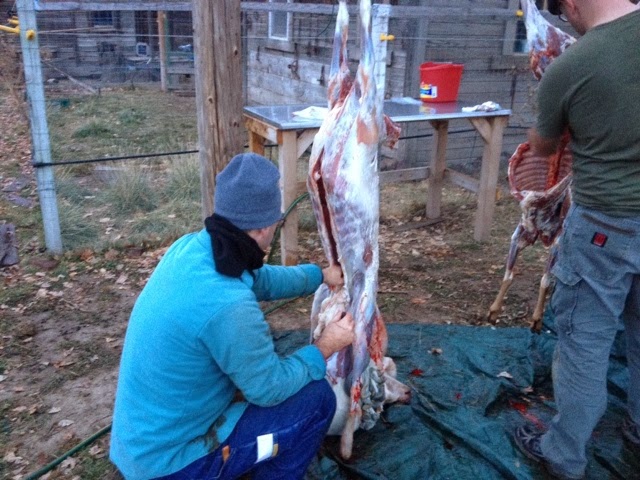 To top it off, we still have two more whethers!  The second time around we found two more, we obviously need to update the spreadsheet.  The lucky tag numbers were 24, 30, 34, and 32.