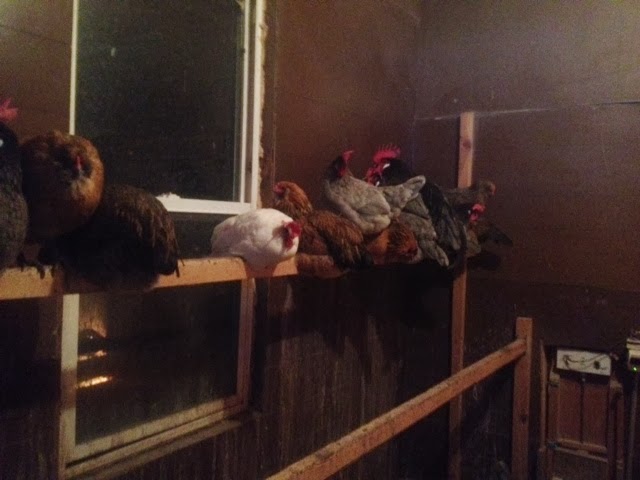 It got very cold here in Eastern Oregon!  The beginning of the week we had record cold temperatures.  It was as low as -18 degrees Farenheit at our house.  The older chickens did just fine.  I still had a heat lamp for the babies (who are over three months old) on and it brings the whole coop up about 20 degrees at least.  All the walls have insulation in them so when the door and windows are closed it is airtight.   I had opened up the baby area to allow them to go outside and cruise around in the 360 degree enclosed pen.  Unfortunately, I forgot how stupid the chickens can be.  Two of them went outside and froze to death 12 inches from the entrance to the coop and 4 feet from a heat lamp.  So now there are only 6 naked neck turkens.  At our house this is not such a bad thing, if they are too dumb to come back to the coop the predators get them anyway.  There is only one safe place and that is inside the coop with a functioning automatic chicken door!  Otherwise every predator on the planet likes chicken. 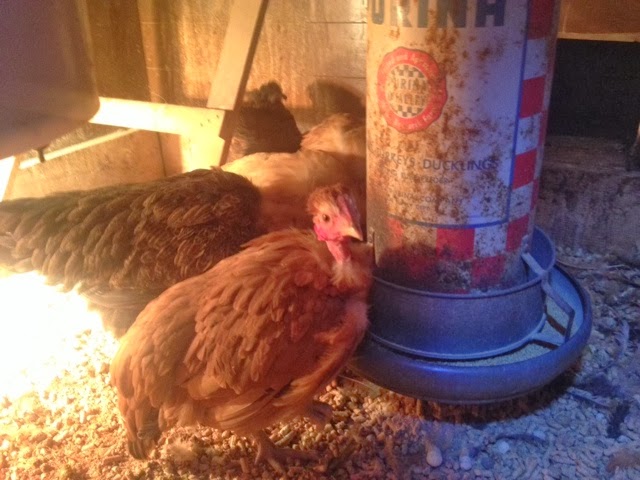 Annmarie and I went out to the barn and threw out some more straw on the floor for the sheep.  She said it needed to be clean and dry.  I reminded her that prior to us redoing the floor no one ever covered the floor.  The barn is so cozy I would sleep out there!  I would smell like sheep but it would not be a hardship.  The roof still does leak in a few spots, but hopefully I can finish the roof next year and take care of that problem.  We pulled in a couple more long baby feeders so we can feed grain to everyone during the winter.  We give them a little supplement due to the cold and nursing the babies.  We talked about the ideal herd size and are considering thinning the herd down next year.  We have almost 25 ewes now.  We are thinking 15 ewes is ideal.  They would have 20-30 babies every 8 months.  So even at max capacity we would not have more than 80 sheep for a couple of months.  There is talk of bumping the cows up a couple more.  Feeding 7 cows has caused us to use a lot more hay than last year.  The females are all pregnant and the babies are around 250-300 pounds now.  So it is more of a drain than anticipated.  I am sure we are going to have to buy a few tons of hay.  i should probably start asking around soon.
We saw a nice passive heating system made out aluminum pop cans painted black and a heating tube with small fan to move air through cans.  It was pretty cool.  We are still thinking solar power for the barn is the way to go.  At least a couple more years off.  The roof needs to not leak before we bring in power, the little things do tend to matter.  I am hoping for another good snow storm so I can burn the other two wood scrap piles I have laying around.  There is a small one in the barn lot and the huge one up on the hill.  The one on the hill is going to be very large, house size almost.
When it got so cold I had Sarah put some hay in the hole in our front yard.  I never got the frost free standpipe installed and I was afraid the pipe would freeze.  We had no straw only hay bales out in the barn.  So Gannon pulled a bale of hay into the yard and broke it up into the hole.  The cows started to lean over the yard fence the next day and ended up in the yard eating my hay!  I had to let Zeke out to chase them out of the yard.  He liked that a lot since he is still cooped up with his bandaged leg.  He was licking it raw after I took the stitch out.  Hopefully next week we can be done with the dressing.  I then had to go over and fix the fence to keep the cows out of our front yard.  The fencing never ends!
The last two lambs are sold and will move onto greener pastures in a couple of days.  So anyone interested in lambs we will have more in 10 months.