It’s a new year but I am still going to be plagued by last years assumptions.  I didn’t sit down and calculate the amount of hay needed to get through the winter.  I just assumed we had enough.  I especially did not account for three extra cows and another 20 sheep.  There is a nice formula 3% of animal body weight per day per cow and five sheep count as one cow.  I did this a couple of years ago and it works great.  I did not do it last year and we are going to run out.  To further complicate things no one is selling their hay.  I have been asking around but it is hard to find.

On the plus side I noticed our bred heifers were getting skinny in the hips.  The bull and calves look great.  While talking with my neighbor about hay, he didn’t have any, I mentioned the skinny heifers and he said our calves might still be nursing.  They are 6-8 months old now but I was not sure if they were still nursing.  I had seen the heifers pushing them off last month. This morning I watched one nurse!  So now we are going to have to separate the weanlings.  Now we just need to decide who gets to live in the orchard and who out by vehicles?  I would like the bull and heifers to live in orchard.  The heifers should give birth in April.
So after getting off a long night shift yesterday I hunted for hay.  I talked to a few more people and started searching Craigslist.   I found hay from $165-$225/ton depending on type and quantity purchased.   We need 5 ton and fuel costs to pull the trailer are going to run around $150 plus another $50 to get help unloading.  I found some barn stored grass hay that will be delivered and help stacked for $210/ton.  This allows us to not have to add in the other costs which saves us money.  The hay comes tomorrow afternoon.  I have spent a couple of hours restacking all the hay in the barn to make room for the new. 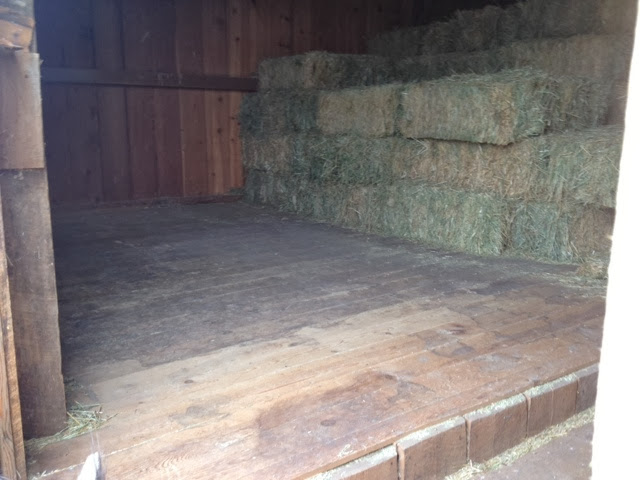 I had already planned on installing one more fence just past the old hand dug well so the sheep and cows can use part of the upper pasture.  I need to fix a quarter mile of external fence that is falling over also.  But a thought just occurred to me, if I fenced off a portion of the lower pasture we could let the cows have access to it in the winter also.  This would give us three cow pastures that the sheep can be locked out.  I would install a connecting gate that would let us mix cows and sheep during summer.  The fence would be easy to install, all metal posts except for a single gate.  I will have to think about it.