Yesterday, Steve called back to the house as he was headed to work to say there was a new calf in the orchard.  Now, I’m still recovering from the plague, but that didn’t stop me from getting up to look and sure enough, there was a second little calf.  No, I didn’t go out to check gender.  After Steve’s experience, I’ve decided all calf handling will be done only after running the cows into the chute.  We can reach in and check gender and tag with cows safely confined.

I was coming in after work today, and the mamma cows and the babies were gathered
under the apple tree so I stopped the car to see if I could get a picture, even though I wasn’t very close.  As I was fussing with the zoom on my phone, trying to get close enough to be able to get a half-decent photo, I noticed there were not two, but three calves.  Yes folks, we have three calves in the orchard.  There were two possibilities – either everyone had one calf, or someone had twins and there was still one to go.  Every calf had a cow paying attention to it, but that’s no guarantee, since we’ve got a cow out there that was nursing all three babies last year – even though one one of them was hers.  So, I went out with a better camera (I stayed outside the fence, thank you very much).  And sure enough, three calves, and each calf has a skinnier mamma paying attention.  Somehow, they all got synchronized.  Handy.  And not at all due to our superior planing. 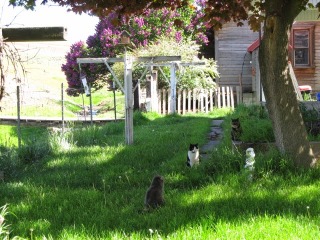 While I was out with the camera, I took a few photos of the back yard, such as it is, and the creek.  What we call the back yard is really a very  narrow spit of grass barely three lawn-mower passes wide.  I’m thinking eventually the grass will come out and be replaced by something else, as will that sidewalk you can see the cats sitting on, but that’s a ways down the road.  I do love that lilac bush you can see in the background, though.  It gets all the water it wants and is that lovely dark purple color that you just don’t get to see very often.  Steve trimmed it last year so it didn’t hang out so far over the walkway.  It looks like he’s going to have to trim it again this year.

The back creek is going down, but it is still running.  The longer it runs the better.  That just means the water table is staying nice and high.  Hopefully things won’t dry out so quickly this year.  Of course this is also contributing the to return of the swampy areas in the upper pasture.  If they stay around, we may have to figure out how to manage them.  I’m all for water, but I’d rather not have the mess of smelly decaying vegetation that is a swamp.  Ah well, we’ll cross that bridge when we come to it.  There always seems to be another adventure on the horizon.  One more new thing to learn.  I guess it keeps us young.