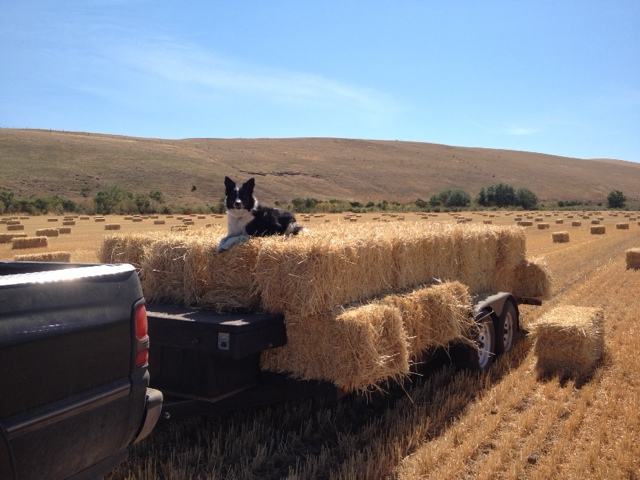 Zeke is a real farm dog now. He learned today to ride on the flatbed empty and with hay. It was really the last thing he needed to check off on his bucket list. We did three loads of hay today, 100 bales approximately 4 ton. Zeke ate another five voles. Annmarie thought sprout had chased him off his food, I just think he is not that hungry.
While unloading the second load my left knee started bothering me as I was climbing the hay pile with a bale in tow. I finally just gave up and had the nephew climb the pile. I did the loading and unloading. I scheduled more help for Friday. I figured two teenage boys can tear it up. I will drive and work on the new feeder in the barn while they unload the hay.
After lunch we went to the metal scrap yard, my favorite place. I picked up about 1000 feet of woven wire, two cow panels slightly abused, two nine foot long culverts (precut and waiting for me!), a few horseshoes and some chain. I ran out of space on the trailer. Next week I am going to rent a backhoe to finish digging out the irrigation ditch.
Zeke decided to be some help moving the sheep after first trying it his way!  Eventually, he listened to me and five minutes later the sheep were where they needed to be.  Sometimes I think he doesn’t think I am giving commands unless there is yelling and swearing involved. This is not a PG-13 show!  I will never be able to take him to a sheep dog competition.