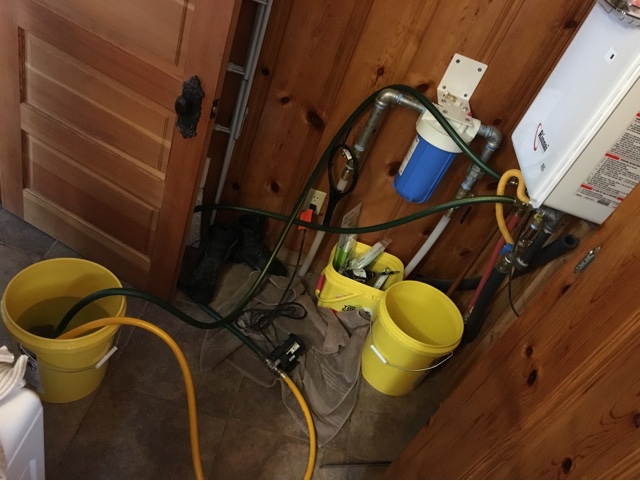 We have been having temperature and pressure fluctuations while people are showering. It seems to only be occurring in the bathroom. I decided I would try and fix it even though it involves plumbing. I had used vinegar to clean out the keurig maker last week I figured it was time to do the same thing to our hot water heater.  My parents had a sump pump and I cut a short hose in half and made a double female ended connector and a regular short hose. I used two five gallon buckets and three gallons of white vinegar. It was pretty loud once I got the vinegar recirculating so I closed the laundry room door and had to open the back door so the vinegar fumes didn’t make me pass out. I let it circulate for an hour. Then closed it all up and blew out the hot water line into the deep sink.  We got some stuff out but not a ton. I also changed the shower head in the bathroom. Tonight when I took a shower the water temperature was great!  Very consistent throughout the entire event. The water pressure was still an issue. I need to change the system in line filter and then see how it feels. I suspect I will have to tear apart the bathroom faucet!!  The Home Depot junk valve is still haunting me. I will do the filter first because it is easy!!
I had to put another bale of hay out for the cows. Unfortunately, there is snow on the ground and my little tractor could hardly move the bale. This was exacerbated by the stupid bull getting on the other side and pushing back!!  I had a very hard time getting the hay to its final destination I will have to start moving the feed spot closer to the hay stack. I counted the large bales of hay, we have 20 left. Five for every month will get us to April 1 2016.