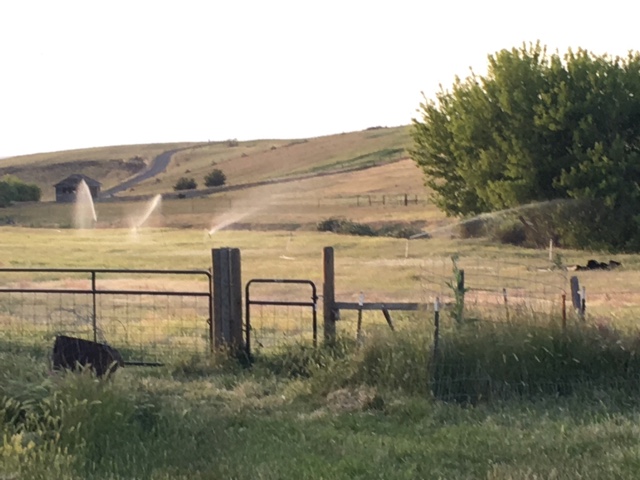 I did it, I got the water running!!  It took a bit but it is spraying where it is needed. I needed a new discharge hose and had to go to three businesses before I found one that had it. The real problem was I was in a time crunch and was afraid no one in Pendleton would have it. I ended up buying it at the equipment rental place.  I only needed 15 feet but they had 50 & 100 ft rolls with attached connectors. I asked about bulk hose but it would take 2 days and cost $17/foot!!
I bought a pre made 50 ft roll for $135 or approximately $2.75/foot it was “slightly used”. It looked brand new to me. I hacked off one end when I got to the farm. This summer when we run out of water I will get a real quick connector welded to the pipe so I can use fittings instead of hose clamps on the discharge hose. It will make it much easier to replace in the future. I left both end caps off and am hoping that the water pressure cleans out the mud and debris in the pipe. Annmarie told me yesterday that four more sprinkler heads had cleared themselves. We will run the irrigation until there is not enough water. I have no idea what the electricity bill will be. The guy on the phone tried to explain it to me, but it was quite convoluted. So much so that I closed the conversation with “you will send me a bill?”  Once I was assured that the billing address was correct I gave up on caring how much it costs we need to run the pump and we are being billed at irrigation rates. Once the bill comes I will have an approximate rate. I am told that at the end of the summer I get an extra bill based on my peak draw rate I.e. Startup of pump. So in all reality I have no clue what it will cost.
I out an add on Craigslist for the sheep. So far I have only gotten one email and she wanted pictures. I sent an email with the blog link but I do need to go take some more pictures and link them to the ad.
My dog proofing of the yard has failed already.  Zeke has figured out how to get out. No one has seen him in the act yet so we are not sure where it is occurring. I am going to have to install woven wire across the entire front. On a plus side, Sprout has not been able to get out of the yard since the update on the fencing.