Skip to content
We have had company over the holiday, friends who have not been able to visit for the last three years. We always appreciate seeing them and catching up, we too know “Doug from Montana”.  The wind howled all three days they were here so we didn’t do a project this year.   Instead we caught up and ate too much food. The constant wind buffeted our new internet antenna causing some consternation and speculation. We reassured them that the antenna was rated for this type of wind up to 80 mph minimum. We woke up this morning to no internet service. It was still pitch black so I tried to look for the little light on the dish. It’s a power indicator light so we know it is still working. No light, but in my defense it was early and I had not had any coffee yet so I was still near zombie state. Doug was out taking sunrise photos and Annmarie went out at first light to look at the antenna. It was truly down!  It was laying on the roof top no longer functional.  We speculated a cable had broken. I was able to go out two hours later and discover that one of the tighteners came apart, it untwisted. I think this is easily fixed with heavy duty tighteners and some thread tightener goop.
Unfortunately the dish got dented so it will probably need to be replaced and I am going to have to get a boom truck that can extend to a minimum of 35 feet. This option is probably the easiest. It will take some arranging. Probably not my first choice.
I have been thinking up this hairbrained idea involving a long rope, the pickup and two ladders. I need to see if I have the rope in the old house… 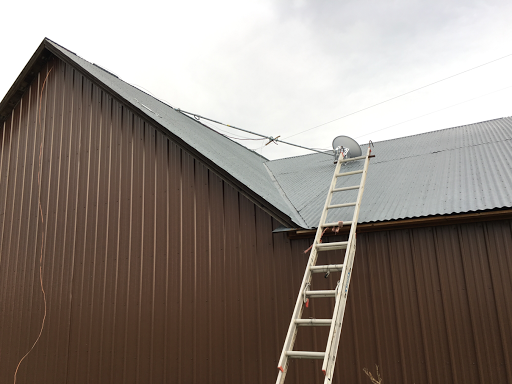 I didn’t have any rope in the old house and had to run to town. I had the heavy duty tighteners we just didn’t use them. We used the ones that came with the antenna kit. I should of gone for overkill. My nephew came out and suggested we swap out the two fasteners with the antenna tipped over so when we pulled it up with the rope it would stay in place. A fabulous idea so I crawled up on the ladder and swapped out the first one. I then climbed up onto the backside of the roof and climbed up the roof. This was way easier than doing the double ladder trick. The trouble with this is it must be perfectly dry with NO chance of rain or else I will just slide off the roof on my way down. We wanted to be able to pull the rope free once the antenna was up in the air so I threaded the rope through a loop in the cable and tied it to a stick. We tied some light weight cord to the back side of the stick so we could just pull the light cord and pull the rope clear. The dish had a bent collector, the dish part. It is easily replaceable!  The brains still had power and a green functional light just no signal bars. So I think it just needs a new collector. We cannot call the internet company until the antenna is back up.
As I was crawling to the second anchor to replace the tightener I noticed that my roof anchor was torn on the backside. It was not something we could have seen from the ground. We need a new roof anchor. So no internet until the roof anchor comes. Luckily, I now know to put the roof anchor on the antenna and then screw it into the roof!  The roof bolts did not budge!
So next weekend we will get to test the rope method. 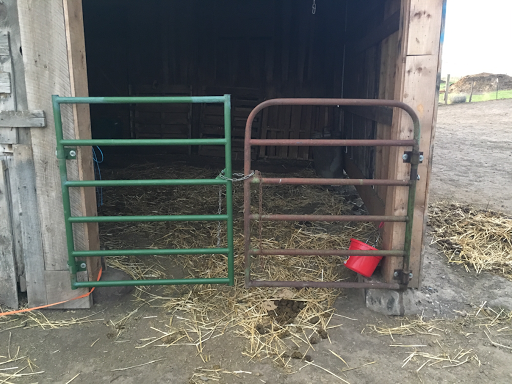 The horses have managed to bend the cow panel we were using to keep Mika in the milking area of the barn. So we decided gates were in order but the opening was only 7 feet wide and I had four feet gates and 2 foot gates. I was going to mount them on the inside but then they would not fold flush to the walls causing problems when moving agitated animals. The two four foot gates were perfect when I mounted them to the outside. Now we don’t have to wrestle a 16 foot bent panel in place and attach it at four points to keep the horse inside.