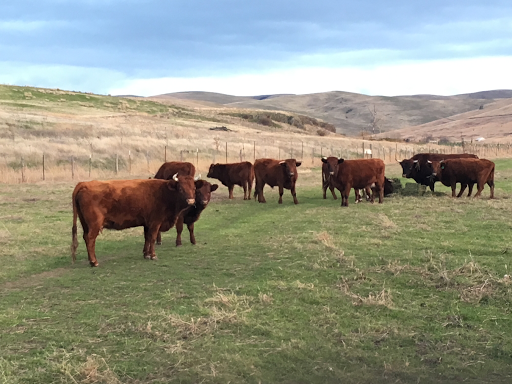 This is not where the cows belong!!  This is the hillside above the upper prime. It is not currently fenced in. I have plans for that but they have not made it past the planning stage, prep stage, supply stage and I have even managed to set up supplies on the job site but no actual fence has been constructed. The cows pushed through the last cow panel fence left. Initially, slapping a cow panel up as a gate seemed like a good idea. It works great for keeping the sheep in. The problem with this plan are the cows, specifically the bull. He loves getting by cow panels. He knows there is a way and just keeps at it until he wins.  Being a gentleman, he will actually hold the gate up and out of the way to let everyone else get past.
AnnMarie called me at work to help but I have been prepping for a big inspection at work and was not able to get away. She took the tractor up with some hay on it to entice them down. No success and she managed to get the tractor stuck in the dry creek bed.
I came home early and put tractor in four wheel drive and drove back into the upper prime pasture and broke open both bales of hay for the cows. AnnMarie went up on the hill with the two dogs. Mouse was not behaving well. I snuck below the cows in the tractor in attempt to get behind them so I could slowly push them towards the gate.anne-Marie stayed up on the hillside with the dogs making sure they behaved. It took 10 minutes and we had the cows in the upper prime pasture with all the gates shut.
The raccoons are back. We are pretty sure that someone has been dumping town raccoons out at our house again. My mother-in-law Donna has seen two huge raccoons on her front porch eating her cat food. I have not lost a chicken and the current babies are so dumb they are getting stuck outside the coop because they don’t go inside the before the auto chicken door closes.  She called us to come down and shoot them the other night but when we got there no raccoons were found. Out of paranoia we took the super bright flashlight and started scanning all the tops of the nearby trees.  We found a set of eyes high up on one of the trees in the orchard. It turned out to be another raccoon.  AnnMarie took several shots to knock it out of the tree and then I had to go over and finish it with the pistol. One of the problems with there being a shortage of 22 ammo is I have a wide variety from 800 ft./s up to 1200 ft./s.  The low velocity ammunition is too slow to effectively kill predators and doesn’t cycle the action on my pistol so you have to constantly cycle the action manually.
This is a painful process in the dark. After dispatching another potential chicken killer we went inside the house. I started going through boxes of 22 ammo looking for high velocity 1200 ft./s ammo and making a separate basket so I could rapidly locate it.  I also changed out all the pistol and rifle ammo for 22 high velocity rounds. We should be good to go except we need another flashlight. We are constantly arguing over who is holding the flashlight and where is it not being pointed.
Resulting in one of us almost falling.