Skip to content
The butcher is coming tomorrow. We are very happy. The cows were nice enough to break out of their area earlier in the week so I have been feeding them in the barn lot in anticipation of needing to sort out the two steers. We are keeping one for us and selling the other. We have about 8 packages of beef left. Earlier in the year one of the steers was looking pretty scrawny but I am happy to report he hit his growth spurt and they are both pretty much the same size.
Since we had to sort the cows any ways we put their jewelry on. Our original three cows have white plastic chains with large numbered tags 101-103 and the other two producing females have blue chains with numbers 104 & 105.  We can keep the female babies from the white cows to build the herd and we sell, for food, all the cows from the blue necklace cows. We are hoping this arrangement will make it easier for us to tell who is who. The ear tags just don’t seem to stay in. On a plus note, we did notice that our original three females have very low narrow and front facing horns compared to all our other cows. So we can physically tell them apart.
We crammed them into the chute and I tried to wrap a plastic necklace around their neck while above them in the chute. It didn’t work well. So AnnMarie got a 2×4 to slide through the rails of the chute to pin them in place and I started to hold both ends of the chain and slip it under their chin.  This worked pretty good. I had one female smash the top of my foot with her horn and I had another keep trying to hook my wrist with her horn. I got all five tags on the cows without any bruises or blood of my own being shed.
AnnMarie grabbed the calf because she cannot make the ear tagger or elasticator work. Luckily, this is another keeper little girl!!  She has a white spot on her forehead and tail so she will be very easy to identify. We always get the mother’s in a separate pen before catching the babies. Otherwise it is not safe! 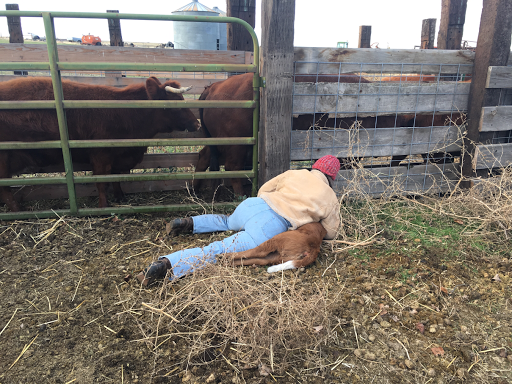 After getting the cows sorted we went to town to pick up our new piece of furniture from the antique store. I thought we were going to need three people to carry the thing across the bridge but come to find out yesterday it comes apart in pieces!!  It is a stacking modular system. Incredibly clever and well made. We had a spot for it just are not sure what we are going to put in it.
We also scored some old maps from 1887 to 1913 of several local townships and some of the surrounding land. We are unsure how to mount them. We are thinking about covering an entire wall in the upstairs hallway as it never sees sunlight. It will take us a while to figure out how to effectively mount them. Until then I am going to cut three pieces of plywood and sandwich them under the bed so they lay flat. 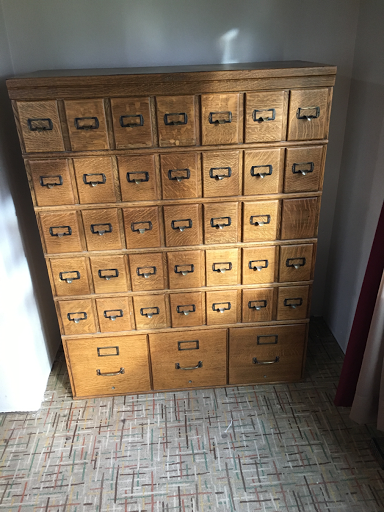 Dinner on the hoof!! Grass fed beef at its finest. 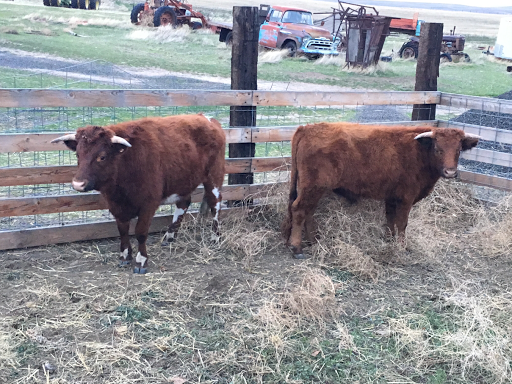 AnnMarie had to go to a funeral so the job of sorting the sheep was left to Mouse, Zeke and myself!  We all three were confident in our abilities.
So the first thing we did was push all the sheep into the barn and then pile them up at the end and run them through the chute. This went stunningly well. The dogs stayed in place with one tiny exception from mouse. I shook him and drug him back to his spot and he stayed. He really does know what he is supposed to do it’s just not what he wants to do all the time.
We sorted out 15 sheep and once that was done we ran those fifteen sheep through a second time to get it down to ten.  I had one wily large whether that jumped over the gate!  I ran the sheep back into the barn four more times trying to just wade in and grab him. By the third time I wanted to just go get the 22 LR and let a bullet do the catching but the butcher was not coming until the next day!!!  So I kept at it and finally managed to get him and nine of his closest buddies into the corral so they were stuck and ready for the butcher. Every few years we get one animal that is just painful to handle. This was his year. 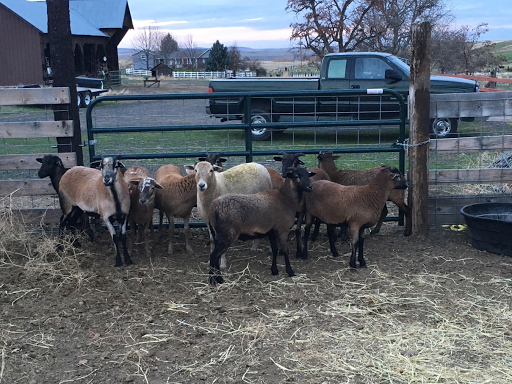