Skip to content
I had visions of high speed internet. Those visions are crushed.
I was unsure why our internet had quit working in the night. I was waiting until 1100 when the dish guys were coming to go outside. The rental company had called and said they would be out this afternoon to pick up the boom.  They showed up early.  My mother-in-law called to tell me it looked like the semi might get stuck. By the time I got outside the semi was stuck in six inches of mud.  I brought over some gravel with the tractor and a shovel in the hopes we could gravel a path back to the road. While we were doing that the satellite guys show up and barely got around the truck. They then proceeded to get stuck by machine shop and powered their way over to the road. The semi is going no where so the driver decides to move the boom around the machine shop. But it is only 2 wheel drive, advertised as 4 wheel drive and it cannot hardly move. The operator is making the problem worse by trying to power through the mud. He cannot around the machine shop as the road is slightly elevated so he had to come back. Unfortunately, he cannot get around the semi truck either. I think he wanted to use the weight of the boom to help him gain some traction in the the semi truck.  This was a large “negatory ghost rider” moment.
Once he got out of the way with the boom the satellite guys got their truck in place and tried to aim the dish.  One of them came over to me and said the pole was loose.  I went over and crawled up the tall ladder on the end of the machine shop.  The collar that was 2/3 of the way up the mast had spread and slipped down in the wind some time in the night.  Wtechlink high speed internet is just not going to happen!  They took the dish down and we laid the mast down on the peak of the roof.  I will take it all down in the summer.  Annmarie called the phone company and asked them to restart our old service.
The flat bed driver finally managed to get chained up and backed onto the road. The entire area looks like a mud derby was held in the vicinity.  Our poor road has huge tracks in it and is mostly mud.  I ordered 30 cubic yards of 1.5 inch gravel in an attempt to actually get the road back in shape. 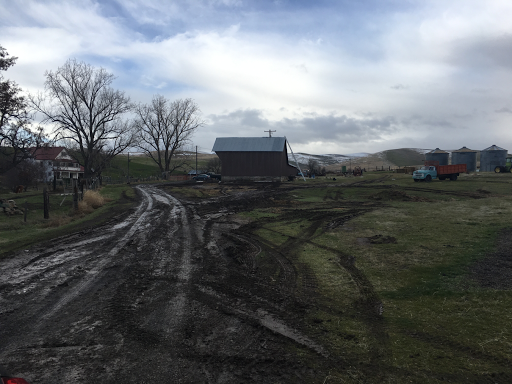 The next day I spread out 20 cubic yards of 1.5 inch gravel on the road by our house and on the dirt road I made this summer.  The dirt road looked pretty good.  Our road turned out to be incredibly bumpy.  Gravel this size is really not just 1.5 x 1.5 inches in size.  it only has to be 1.5 inches narrow on one side to go through the screen.  It is a lot bigger than that.  The nice thing is it is staying on top of the road.  The bad thing is it is staying on top of the road and the cars don’t like it.  It got dark so I could not keep driving on it with the tractor.  The next day it froze and it has stayed frozen since then.  Annmarie is not too happy with the rough road.  As soon as it thaws out I will take a load of gravel in the tractor and drive up and down the driveway to push the gravel down into the road bed.
We are now back to telephone internet at 1.5 MBS max speed.  On a plus note, our phone/internet bill went from $110/month to $60/month after we cancelled for one month for the exact same services.  I truly don’t understand why businesses do that.  We do now have power at the machine shop and we have a light in the hay room.  Both very good things. 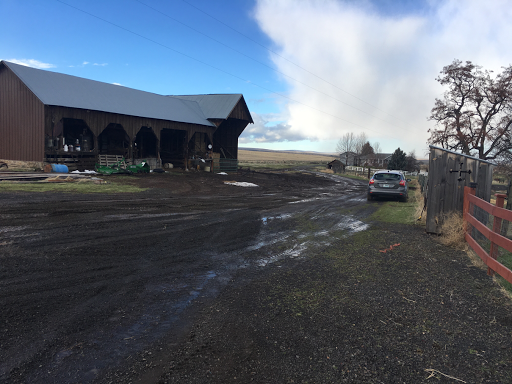