Skip to content
I will live!  Those are profound words for 2017. Theoretically, I do realize that pneumonia is bad but never having had it I had no personal reference. It is horrible. Once I got to the point I could breathe I figured it would be almost over. I was wrong, this crap is going to take a while to get over. I am getting sick of taking it easy.
On Friday I attempted to burn weeds. It was too wet. I got nowhere. I did spread out the last of the large 1.5 inch gravel. The mistress did all the work, I just had to direct her. I even did all the chores on Friday. I was feeling pretty good so on Saturday I decided to ramp it up and do more.
Actually, I was scheduled to work but they called me and put me on call so I jumped on the mistress and we drove around to the back hillside. When the weather hovers at freezing it limits what I can do outside but it was 38 F so the ground was thawed out and workable. When there is nothing else to do and the weather is perfect I like to work on the rock wall. If the weather is too nice then I can fence or burn weeds or do something else. The rock wall requires the weather to be just good enough to not do anything else. So “perfect” for the rock wall means not good enough for anything else.
The last time I took the mistress, my John Deere tractor, to do rock wall work we almost went off the wall and into the dry creek bed. It was sloppy muddy just like yesterday. I decided to flatten out a space on the hillside of the gate so I could maneuver easier. I had forgotten that I would actually have to place big rocks in the bucket and work on building the wall higher. So every 10-15 minutes I would have go get off the tractor and move rocks and keep stacking them onto the wall. My real goal was to get some dirt behind the rock wall so it didn’t fall down. I also managed to flatten out the approach so the mistress didn’t feel the need to drop us off the wall. I didn’t slip toward a certain ER visit once. Which is good because I don’t have my Lifeflight membership decals attached to the mistress yet. She needs a good hosing down and paint touch up first. I spent three hours outside and finally quit as the temperature dropped into the freezing zone.
I need quite a bit more dirt to level off the ground. My goal is to put in 40 hours of work on the wall every year. I will get there eventually. 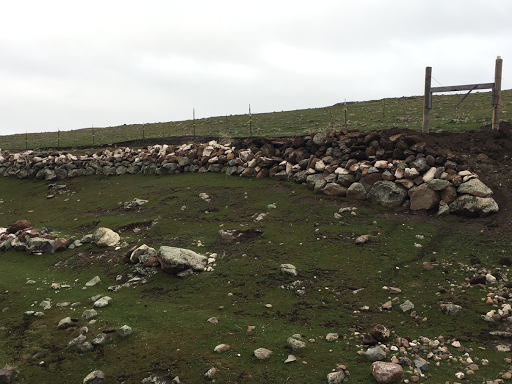 I was exhausted!  I could not believe how tired I was after three hours of intermittent labor.  I went inside took my second shower of the day and promptly laid down on the couch. I have a few more weeks of recovery it appears. I slept for 13 hours last night and have just laid around all day today. 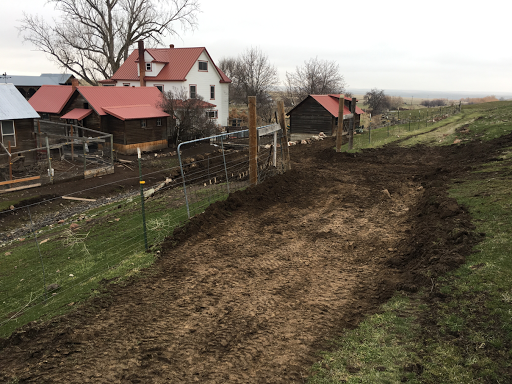 One of our cows just had a calf on Monday. I have still not seen the baby yet but several other people have. I am not sure what gender it is. Annmarie said it’s all brown but it is not a keeper. It’s from one of our bull’s daughters so we will be selling it for food.  I would like another one so we could sell them this summer as a pair for someone else to raise up. It just makes it easier to not have to keep the bull away. 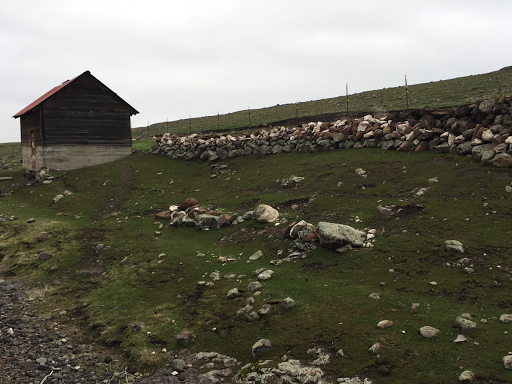