Skip to content
I decided to just finish the front wall today. After Saturday, I decided to finish the right front rock wall. I noticed that the ground was quite a bit lower next to the wall. So I started spreading the dirt farther out into the yard to make everything level. I used over 10 yards of soil to build this back up. The tractor bucket only holds 1/3 yard of dirt. I planted orchard grass so we can see  what it looks like. I am pretty happy with how it turned out. The best part was this wall was rebuilt from an original one that was buried about 45 years ago. It had probably been up for 50 years before that. There is an identical wall on the other side of the bridge. I need to spray the grass and kill the greenery so I can easily dig up the wall.
The barn swallows have returned to nest and raise their young. I was headed to the house with a load of dirt and off to my right eight swallows were swooping around each other. Just as I focused on the group one of them dropped a white fuzzy feather. It fluttered in the wind as each bird dove attempting to snag the coveted nest liner!  It took about ten seconds of watching the feather flutter in the wind before a talented flyer snagged it and raced off. 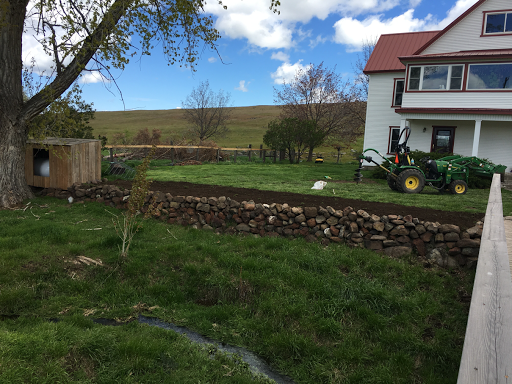 Since this was day 2 with the tractor I decided to do a little more work. One of the problems we had with the back barn lot was the sheep want to go over the fence.  The hillside makes it look like it will be an easy jump to get over the fence. I wanted to cut a four foot wide road/path next to the fence. Unfortunately, this is easier said then done. I tried to go from the bottom next to the creek but the tractor was on a slant and almost rolled into the creek. I managed to get it headed up the old road I made a few years ago. I then decided that if I picked up a bucketful of dirt along the upper side of the hill I could then get lined up and create a road. I would have my uphill tires in the rut allowing me to create a road. I managed to get into the rut and tried to make it flatter. When I got to the bottom near the water I started to slant toward the creek. I then tried to back up the road and the tractor slid into the fence. The only way out was forward. I ended up with one front tire on the bridge and one in the air. I used the bucket to keep the tractor from rolling and then got lined up to drive directly up the very steep hill. The tractor went up the hill no problem. Luckily it has been three days since any rain. I drove back up to the top of the new path and made it flatter. When I got near the bottom I kept going back and forth on the loose dirt near the spring runoff and compressing it down. Eventually I was able to drive out the bottom on all four wheels. 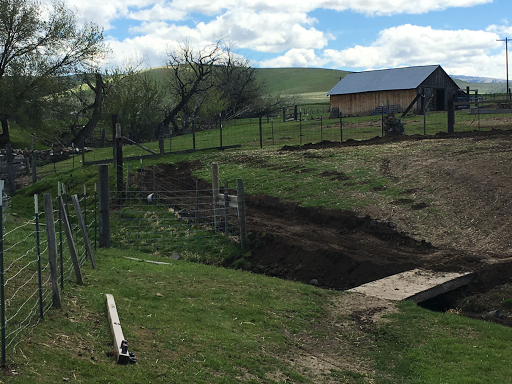