Skip to content
I got AnnMarie to the airport bright and early and after breakfast and puppy play time it was time to work. I wanted to get the upper prime pasture finished. After that the only thing to mow was the upper hay field that didn’t get planted. It’s super tall and full of weeds but as wet as it’s been there is probably running water out in the middle. Tractors sink in the mud!
I mowed the fence lines and my T post line from the fence I did not get installed. There is a lot of water still out there!!  I tried to mow around the muddy parts to give some indication of where it was safe to drive a tractor. Almost 50% of the “upper prime squared” field (new name for the part I started fencing in last year) is swamp and running water. I couldn’t get close enough to mow as I was getting stuck with my little light tractor. If not for being able to push the tractor 8 inches at a time by planting the bucket and rotating it. I never would have gotten out of the mud. As it was I still almost didn’t get out. I just kept finding more swamp. I spotted the baby deer again today.
I really think I am going to have to dig some more trenches and subdivide the upper prime squared field. Create one side for hay and the other side for animal grazing.  Even with that the animals won’t be able to graze until late July. This will require me to put in another gate into this new pasture. I like having a late pasture available. I liked the hay more but not being able to actually run a tractor over the ground is a real problem. 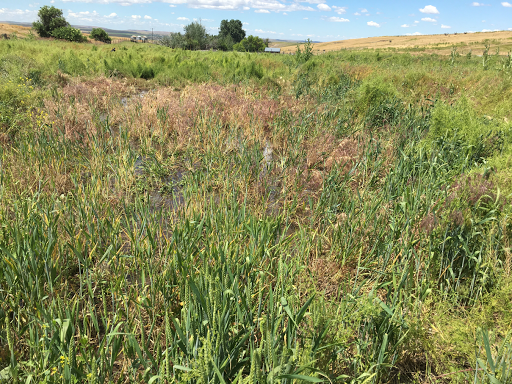 See the standing water in most of the above picture?  Swampy ground. 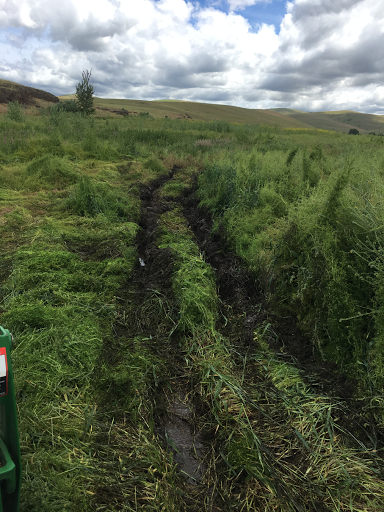 I had to push myself out with the bucket a few inches at a time. 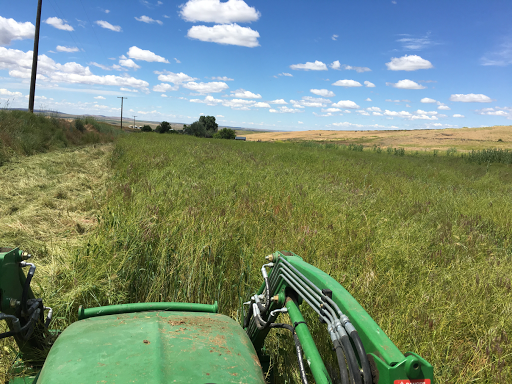 The upper prime squared pasture is very tall. This is mostly grass, volunteer wheat and barley. I tried to knock down some of the ten foot weeds.  After mowing around the water I went up along the upper hillside fence line. I was clearing a section of fence that needs to be repaired. This is not an area I normally mow. I hit a hug rock pile and the tractor started to shake and mower made horrible noises. My newly repaired and rebuilt mower. I got out and tried it again, same horrible noise. I figured I had a bunch of barb wire wrapped around the blades. Nope!!  I somehow sheared off one of the two blades. It looks like I can just remove the metal disc and replace the one blade. The other blade needs to be bent back into shape also. Damn mower!  So now my mowing days are done. I will have to get the disc off tomorrow. 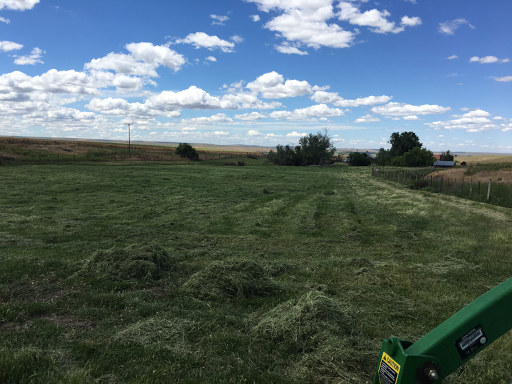 The completely mowed upper prime pasture.
It’s Father’s Day today. I have been trying for over a year to get AnnMarie’s grandfathers zippo lighter to work. I gave it a shot again today, my fourth attempt. I had to ream out the flint chamber as it had clogged up so much the flint could not touch the roller. This made me very happy!  It will only hold one piece of flint in the flint holder.  I stored two more in the bottom of the lighter just like my grandfather used to do. 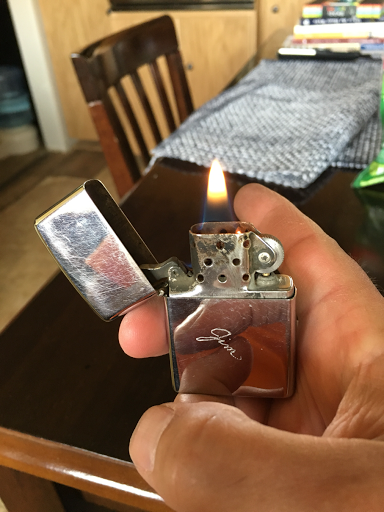