Skip to content
I am sure this will be a love/hate relationship. I am going to love hating the old tractor. I tried to get it started on Friday again.  It would not start!  It turns over great, the new battery is doing its job. I tried throughout the day, three times with no success. I even brought Annmarie out to see if she knew something I didn’t, still no luck. So I spent the day cleaning out the rest of the barn lot and removed all the animal poop from the lamb shed with my John Deere.
I was frustrated we had just paid someone to come out to tell me I was an idiot and the tractor still would not start. While in the shower it occurred to me that the repairman had filled the old tractor with fuel from the wood shed. This was fuel for the lawnmower and could be a year old. I had asked around and had someone coming out to help me take a look at it when I figured I should drain out the old fuel and put in 92 octane instead. So I went out with two gas cans and took off the glass bowl filter chamber and realized that no fuel was leaking. The repairman had left the fuel shutoff valve closed!!  After spilling a pint of fuel on me I managed to get the glass bowl back on and the tractor started. I grabbed one large bale of hay and took it out to the cows. This was a request. The bale dropped three times. I was told that using the hay hooks on large bales doesn’t always work. They cannot hold on. Happier now I went back in and cleaned up.
Saturday I went out to move all the old bales out of the machine shop. I got the first one that was right on the ground. I dropped it twice. Next I have two rows stacked four high. I could not get the hooks to go into the top of the bale so I could lift it up. I tried twice then backed the tractor out and tried again. One of the problems with this old farmhand arrangement is lack of direct line of sight. The equipment is blocking your view. I thought I had the hook platform horizontal and ended up breaking out a 2×8 and 4×6 cross support beam out of the ceiling. It was over before I realized what had happened. I then tried to pull the bales over but I could only find one hook!  I lost my other hay hook.  So then I climbed up on top of the bales and tried to push the top two bales off without success. I finally gave up. We need to get those long spears made for the tractor so I can move the big bales. This will necessitate another trip to the metal fabrication shop plus a request for a quick turnaround time. I need to get hay as soon as Roundup is over. I also need a weight box for the back of the tractor with a few hundred pounds of weight in it. This is good news as we had researched new tractors and were looking at $28k for a set up to move hay. I am guessing but I think after repair work and fabrication and tires we will be close to $5k. Still a much better deal. We also need new front tires for the old tractor. The sidewalls are rotten and coming off in 1/4 inch chunks.  It won’t be long before they blow out. I took pictures and will get them on order tomorrow. We have no pickup and trailer for this week. Annmarie asked me a few months ago if she could loan them out for the dress up parade during Roundup. I agreed without really understanding what I was agreeing to. So I have had to get all new brakes installed on the pickup. The pickup now has a brand new muffler. I cleaned out the pickup, probably the first time since we had bought it. It took me most of a day. We have new seat covers and floor mats in the pickup also. The trailer needed repairs as I had broken out the tail light holders and broken the license plate holder and broken the ramp holder lock. I took the trailer to our local metal repair shop and they welded supports into the tire wells, welded on running boards on the back half of the trailer so that when I hit something the trailer will just slide off. No more hooking the light boxes. They welded new light boxes on and moved the spare tire holder forward to the front half of the trailer. A new ramp holder was welded in just behind the tires accessible from one side with a pin lock. No way for me to drag it off when the trailer drags bottom when I am driving it through the creek or out in a field. The only thing left for the pickup is new tires, but I don’t want to spend $850 -$1k for tires on a vehicle that gets less than 3k miles a year on it. My name is on the list for a set of used tires. There is a slight shake still at highway speed. I am unsure if it’s due to the tires or if it is from the brake job or it just needs a front end alignment. I don’t know and until I get new tires and do the front end alignment I will not be able to narrow it down. 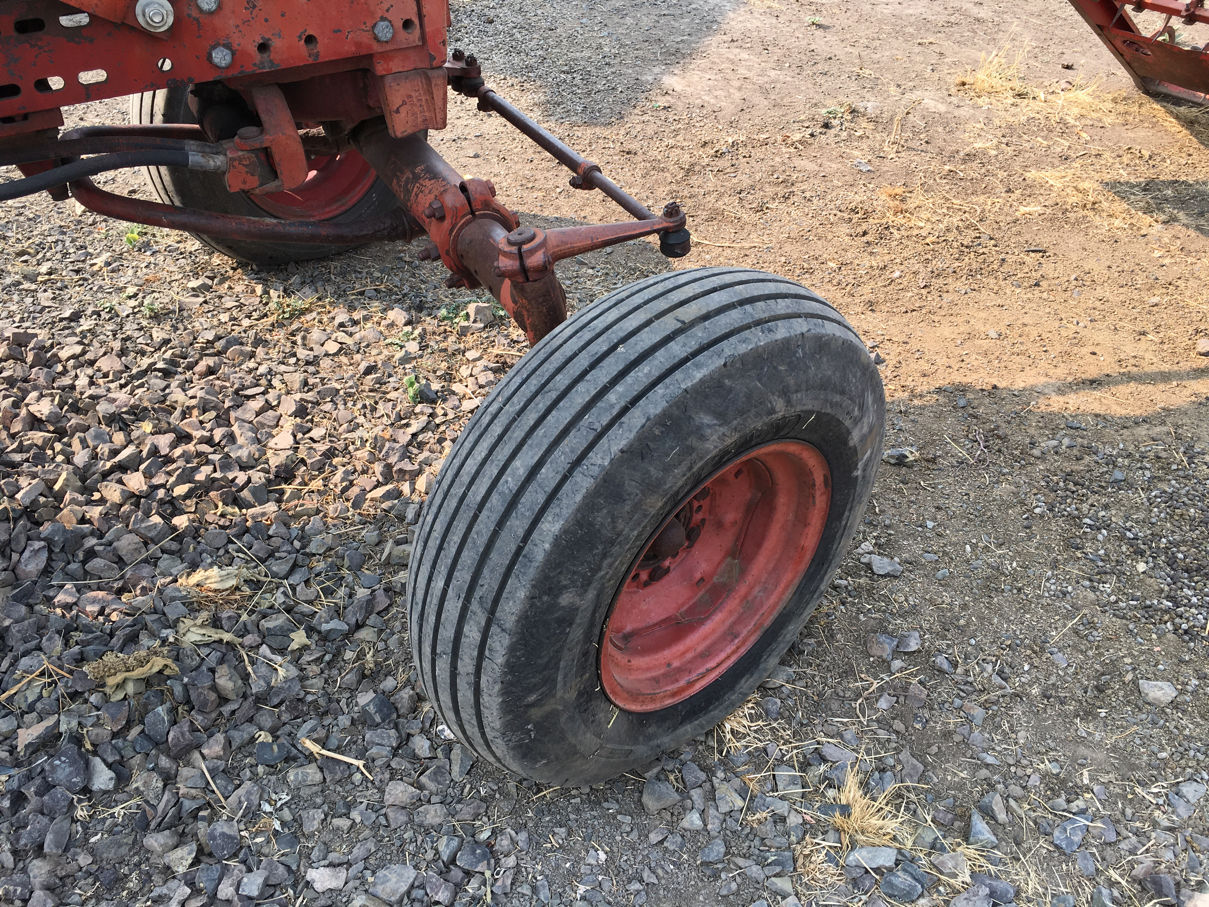 I owe an apology to Annmarie’s father, Ted. He had knocked out part of the back wall of the machine shed with this old tractor. I thought this was just his illness making it harder for him to control the beast. After breaking two boards on my first attempt I now realize he had better control while ill than I do now. There is a definite learning curve. I am currently on the steep upward slope.