Skip to content
All that is left of the hay that needed to be brought into the barn is about 8 bales that did not survive my haphazard tractor created pile. Since the sheep got out of the back hillside Thursday evening and Annmarie had to put them into the barn lot with the assistance of both dogs and our child and friend. They probably need some food. It’s pretty slim pickings on the barren hillside and dried up bottoms.
I had already thrown a broken large bale over the fence last week so we opened up the gates and let the sheep and cows clean it all up. The horses are greatly incensed by this as Annmarie has decided they need to be confined until their feet are trimmed. They let me know this in no uncertain terms even after feeding them first thing in the morning and again this afternoon. 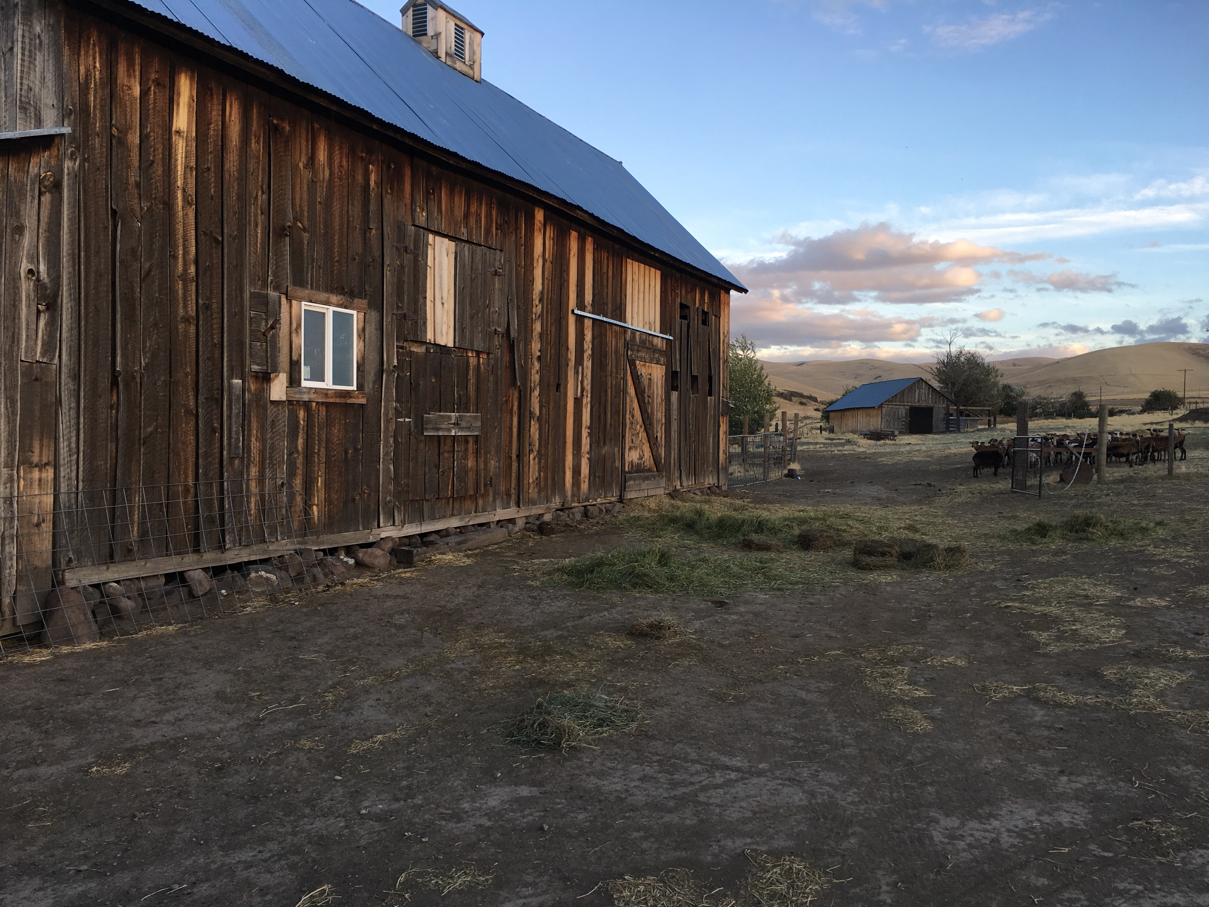 The brothers got dropped off by dad on his way to work. I had got back late last night and did not have time to do the prep work for jambalaya. I wanted to get the sausage cooked and onions sautéed. Annmarie is gone so the dish is going to be something we would not eat together. Which is why anything with beans is usually the menu choice. But I had some shredded chicken I needed to use up and some corn and some sausage. I had some leftover bacon so I threw that in there. I did only put in half of a huge onion, I considered the whole thing but it is our last onion and I didn’t want to be without.
So I was finishing up cooking breakfast sausage when the boys arrived. They said they had eaten so I finished cooking. I had the jambalaya doing its first 20 minutes of cooking. I went all out and use Zataran’s boxed jambalaya. I had added a can of garlic tomatoes and I used chicken broth instead of water, it was leftover in the fridge also. I went with the spirit of the fridge for my main ingredients. I had one of the boys feed the horses while I fired up the old tractor. We needed to empty the trailer first. It started right up!  The minute I tried to drive it or put a load on the engine it started to sputter and died!!  This is not good!  We had to unload the trailer by hand and stack it into the machine shop. I figured we would start with those as they are the heaviest bales. I sent the boys to start filling the barn and cautioned them to alternate bales and rows. I went and took some more broken bales to the cows. By the time I had gotten back to the barn the boys had filled the entire floor of the barn with one layer of hay faced all in the same direction. The bales are loose so very fragile. Not to mention it’s hard to walk across hay. I made them pick up 80% of it and we discussed working from the opposite corner from the door and forming two wings with a ladder arrangement that lets you get bales to the top as fast as you can. This concept of gravity and always working upwards had to be reinforced throughout the day. You need a bale on a lower level you pull the unattached one from above!  Constantly reminding them the goal is to stack it to the top and it was past that level so it needs to go higher so work and effort are not squandered. They were catching on by the tenth ton. 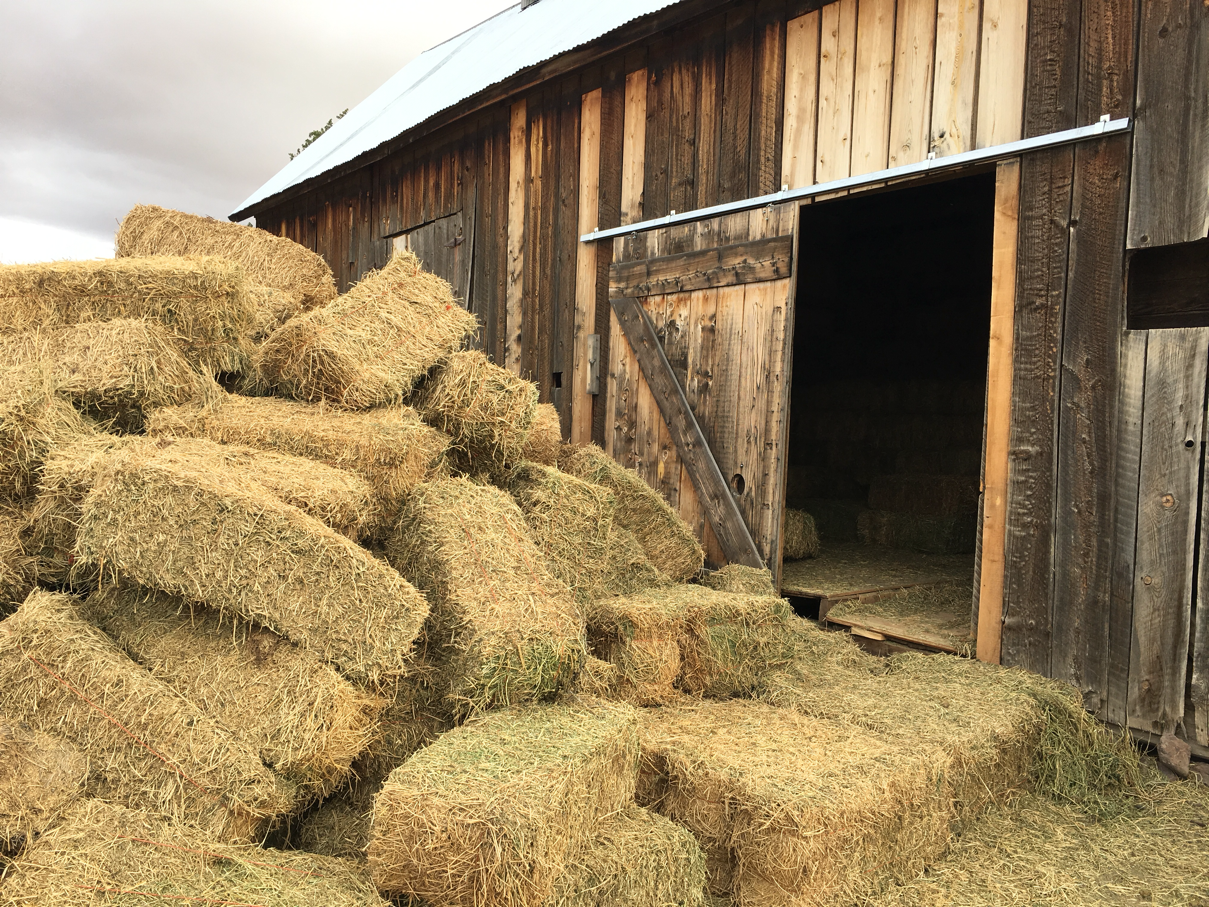 By 0900 I remembered what it is like to work with brothers. I have had three different sets of brothers out over the years and it is always the same. I finally had to put in a no complaining clause until 1400. I was then questioned as to why that was a good time to complain. I informed them that they would be sore and have a full stomach from lunch and would have a good perspective on how much work was really left. This cut out the complaining. I was instantly rewarded for my quick thinking, little did I know. The weather was perfect and miserable for moving hay. The wind was blowing 20-25mph and the temperature was pretty cool. I moved hay all day in a tshirt and super lightweight long sleeved shirt and I never broke into a sweat. The problem was when Annmarie called me with updates I would hold still and began to get chilly. It started to rain so I told the boys to pick up the pace. I went to check on the kitty for the third time as I had not seeen him today. I spotted the orange tom eating his cat food so I refilled it for the kitty. He showed up and so did Gizmo. Now it was 1100 and Gizmo had been outside since 0730. He was cold, face and legs covered in stickers and shivering. I pulled all the stickers out and took him into the house. When I went back out the boys suggested we could work past lunch and eat a little later to get the hay in. It stopped raining so by 1207 there was some clamoring for lunch. Now mind you no one is wearing a watch. I had my cell phone playing music and had been explaining various songs and meanings to the boys. Early on when explaining that we were having gumbo for lunch, yes I did mess this up, they said what’s gumbo?  So I said Cajun food. What is Cajun food? was the response I received. So I then proceeded to give them a lecture about growing up in a small town does not mean you have to be a hick. They asked me what a hick was?  I finally got all that straightened out and worked in a math lesson when someone asked me how much hay the animals needed each day. We did some extra math and shortcuts and discussed the joys of using addition, subtraction, multiplication and division all at once to make difficult math problems simple. Break the problem down into manageable pieces and get an answer. 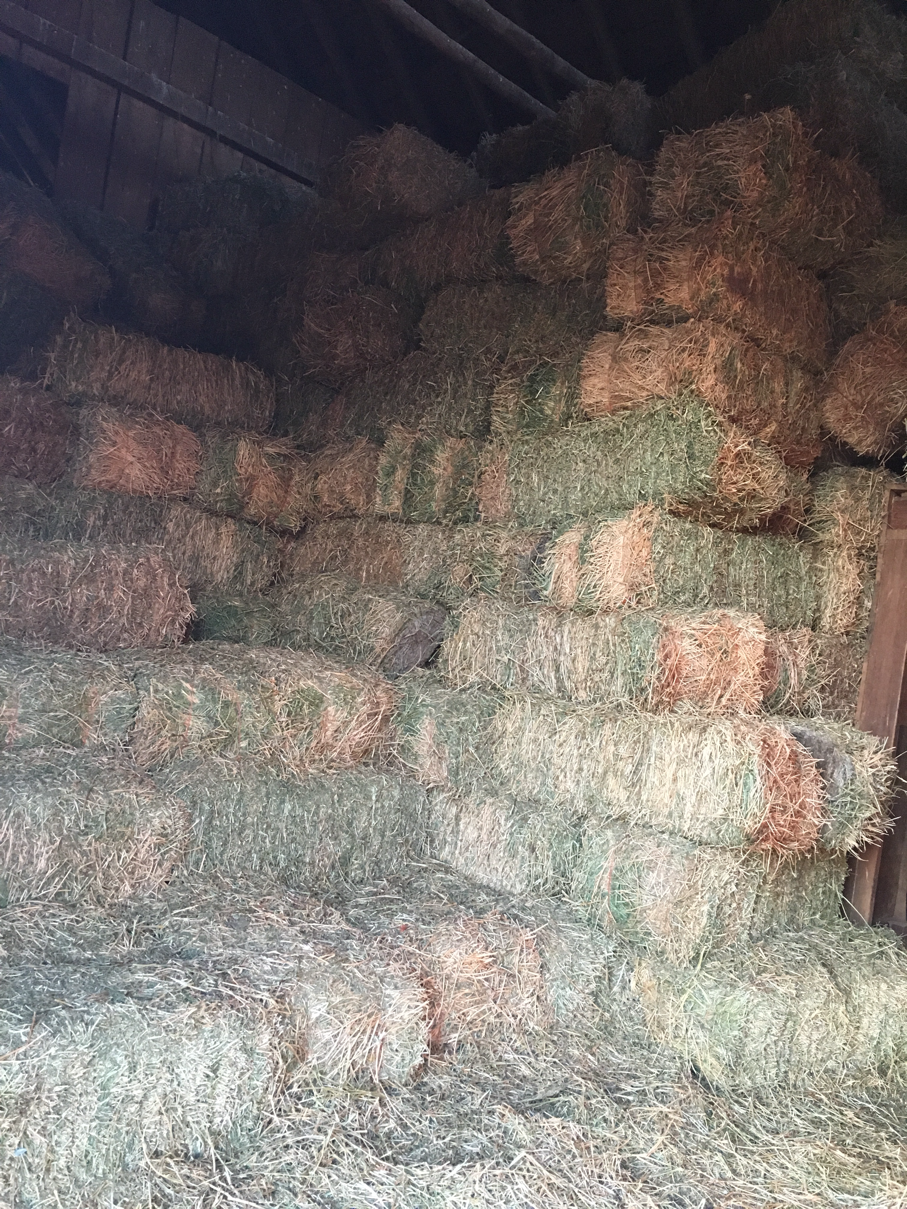 It’s lunch time and I am reheating the jambalaya on the stove and zapping my last two ears of corn to be cut off the cob and added. I forgot to do it in the morning. Now I should mention that no one really gets any say in what they get to eat for lunch. I don’t usually ask anyone’s preferences. I figure they are teenagers or young men and will eat whatever is put in front of them. So I dished up bowls for everyone and we eat. It’s good so I ask the boys how it is. They say it’s good. Then I start getting the input on what they do and don’t eat. Neither one likes tomatoes but they both eat spaghetti and tomato soup. One doesn’t like onions but is sure he doesn’t taste any. Neither one likes plain rice but if it’s flavored it’s all right. I had my third lecture of the day about them really liking tomatoes but maybe they didn’t really know what it was they wanted. They both had seconds and there was half a bowl left so I could eat it for dinner.
At 1404 I was asked if it was past 1400 yet as no one had a watch. I informed them it was and the grumbling started back up. Having set this up myself I suffered through. The wind was so bad it looked like upward hay snow in the barn. It was horrible. Lots of coughing and hacking and drinking water. I was informed by one brother he had a sinus infection and was stuffed up. I told him to use a netti pot to rinse out his sinuses. What’s that? Was the response I got so we went over that also. We finished up just before 1600. This was even after straightening the horse side of the barn and getting that room ready for four tons  of straw. So we cleaned up, picked up yard tools that were strung all over the farm and put them away. I had just found my battery sawzall and drill last weekend. They were out in one of the old stalls in the lamb barn. They were hidden so the animals would not get into them. Unfortunately, I had forgotten them and they have been missing all summer long. We drained and picked up all the hoses. Put away all the sprinklers and moved our new round horse trough into the backyard to add to our elevated garden. 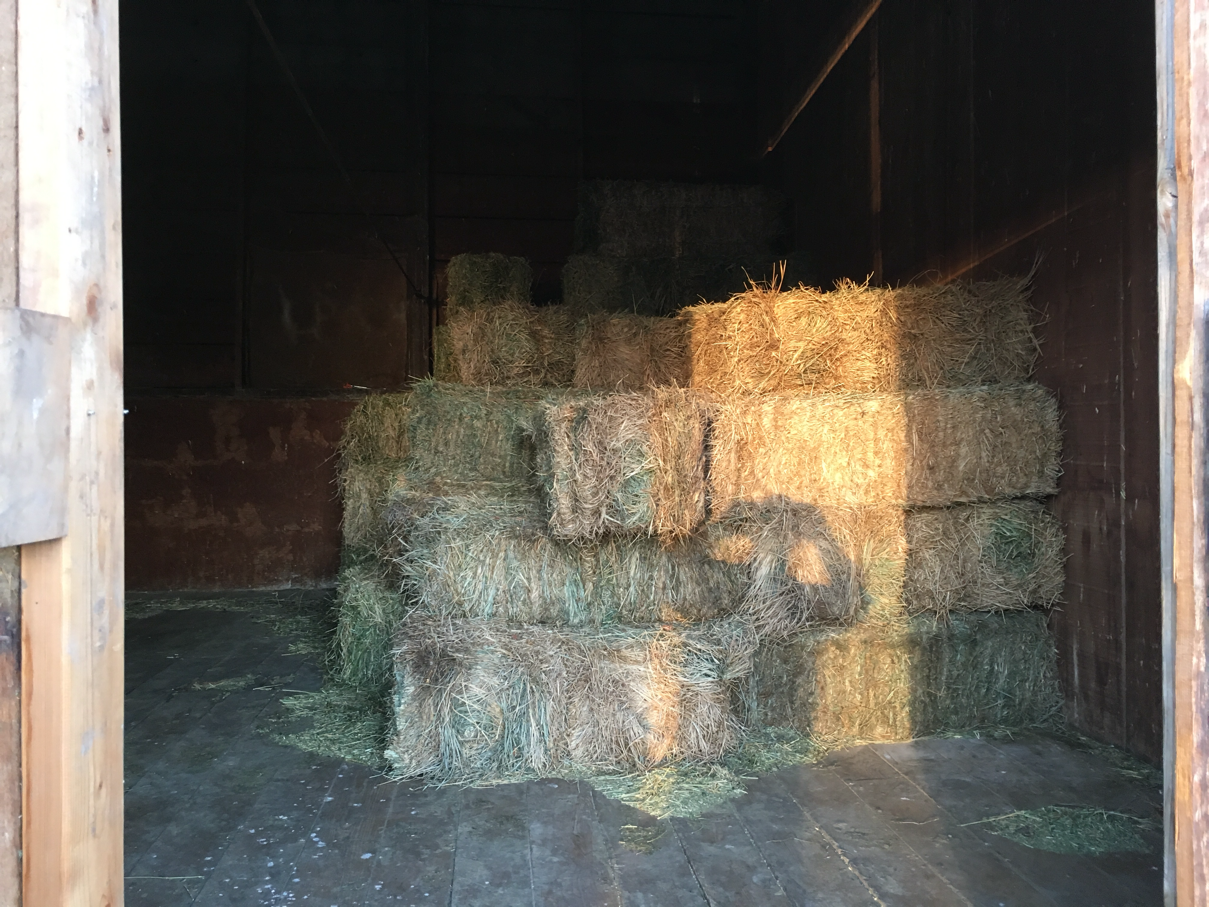 This was way more than I anticipated and we were headed into the house to get money to pay them when I decided they needed to help me get the safe into the house. This was accomplished without too much hassle. The only real problem is our living room is collecting things. Notice the picture below. You will see a large floor loom waiting on me to finish painting the craft room. You will see a newly acquired cedar chest that has no home yet. In the far left corner there is an end table that needs to go back to grandma Donna’s house. On top of it is an antique chest that we have not chosen a location for yet. I decided that the middle of the living room was a great place for the safe.
The boys were a great help and I really appreciated them sticking with it. They only zoned out a few times and I snapped them right back to reality each time. It was worse once they got tired after lunch.