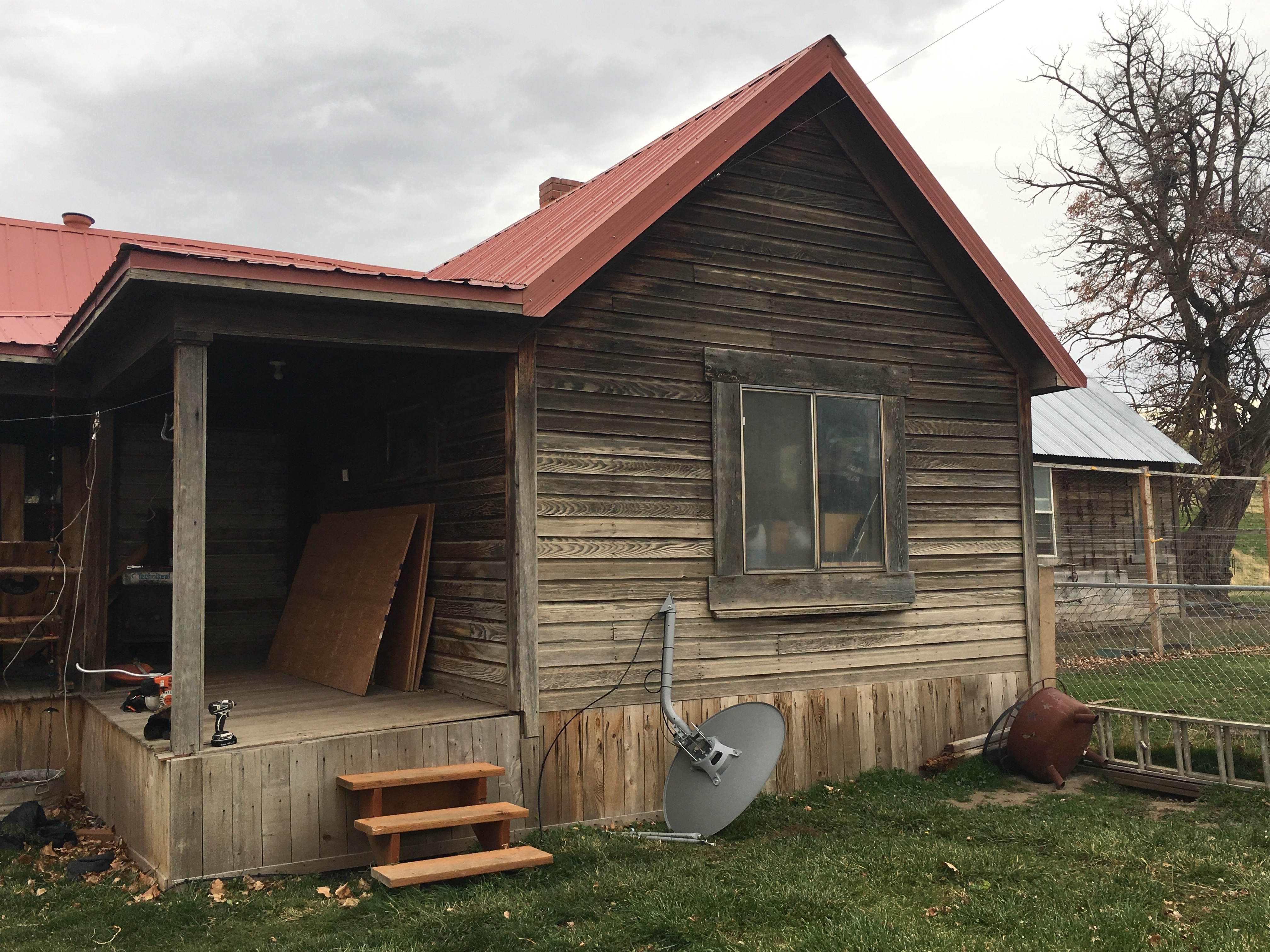 We gave up on Hughes net. After a week of Annmarie spending 6-8 hours on the phone with Hughes net and getting an upgrade here and there we still could not stream television shows. I find it interesting that our DSL is only 1-2 MBS and we can stream TV with all other devices in airplane mode but with Hughes net speed test saying 23 MBS we could not stream any TV. She cancelled it and the only thing they wanted back was the modem. We can “have” the dish.

What are we going to do with the dish? We are already planning on turning it into a bird bath.

The wind was howling today and as I look out the living room window I can see the flashing on the end of the old house flopping around in the wind and the now defunct internet dish moving in the wind. I decided that there is no better time than right then to go out and fix this problem. So I grab my impact driver, several bits, some sheet metal roofing screws (silver not the matching red colored ones) and proceeded to attempt to get the ladder up onto the end of the building. This proved harder than expected with the wind. I set it just under the peak and climbed up to the top, there were a bunch of empty old hornets nest attached to the roof so I just decided to scoop them all down. After I got stung inside the left arm of my coat I realized that they were not all empty! I killed three hornets and finished cleaning out the peak. I fixed the peak and tacked it down with some more screws and then had to move the ladder to the left. I had to go over the defunct dish so the angle was pretty shallow and the ladder was not very secure. I made it to the roof line and was leaning out to the left and trying to screw in a screw when my Apple Watch started making this weird noise. So weird I stopped and looked at it. I had somehow pushed down on the watch continuously and activated an emergency 911 call! I quickly started hitting buttons telling it I did not want to do that and it asked me three times if I was sure. I was very sure. So I am still trying to drill in the same screw when my phone rings. I would normally ignore a phone call while I am leaning over the side of a ladder in the wind while trying to stay on the ladder, but I figured this could not be a coincidence. I was right, it was the 911 dispatch center asking me if I was alright!! I had to assure her multiple times that it was an accident and I was still on a ladder in the wind and was fine.

I finished screwing down the flashing and then removed the dish from the side of the old house. I figured I might as well get it down as it was ugly and I was there. We would have tolerated it if it had worked!

I have the ladder out in the stairwell so I can wash the walls and start painting. This is day three with the ladder out and all I have managed to do is fix the overhead fan, change out two light bulbs, vacuum out the lights, the upper window well and wash the upper window. I keep thinking about beginning the painting process, i have the whole thing planned out in my head.

I also installed a few motion activated lights in our downstairs closets. Now when we open the door there will be light! I also glued down our closet door tracks that Annmarie made on the 3D printer. Today was a catch up day to get on top of all the little things that have been piling up.

We advertised the old tractor for sale (International 504, gas engine with farmhand loader and hay grapple with blown head gasket) for $3500. We also put up the 2004 Aveo (child hit deer and ruined radiator and popped off the timing belt) for $400. Our third listing was our 16 foot enclosed single axle Sharpe trailer for $2500 all done yesterday afternoon. Cash is king and first person with it in hand takes whatever they want. I have had 3 enquirers on car, three on the trailer and one on the tractor. We are hoping to sell enough stuff to buy a stock trailer.

Tonight when I went out to feed it was pouring down rain, our rain gage said 6/10 of an inch when I dumped it out but that was over the last two weeks. I will try and keep better track of the rain on a semi regular basis. I went out to the barn in the pouring rain and noticed the gutters were overflowing. I fed the sheep, horses and cats then went and got the ladder. The gutters had filled up with a few leaves and a lot of mud! All this dust from this summer ended up in the gutters and a few leaves created a dam. I had to dig out dams from both of the gutters. I really need to bring in about four more scoops of gravel to go alongside the end of the barn near the barn wall. There was a small stream running next to the gravel I had already placed. I just need to fill up the whole area with gravel.

On the way back to the house I swung by and checked on the new chickens. Five of the ten new idiots were standing out on the ramp locked out of the coop by the automatic chicken door. I had to throw all five of them back into the coop. I keep hoping they will catch on soon.