We are going to have a White Christmas this year. It is always amazingly pretty to see all the snow, it blankets the ground and covers all the imperfections. Unfortunately, it brings its own set of problems. Everything is harder as I now have to slog through six inches of snow. I attempted to shovel the sidewalks and a couple of paths through the yard but was unable to find a snow shovel. I was positive we had one in the wood shed, I was wrong. I ended up using a broom to clean off all the walkways, cars and front porch. I also looked for the extra 50# bag of ice melt I “knew” we had left over from last year. Nope, it was nowhere to be found. 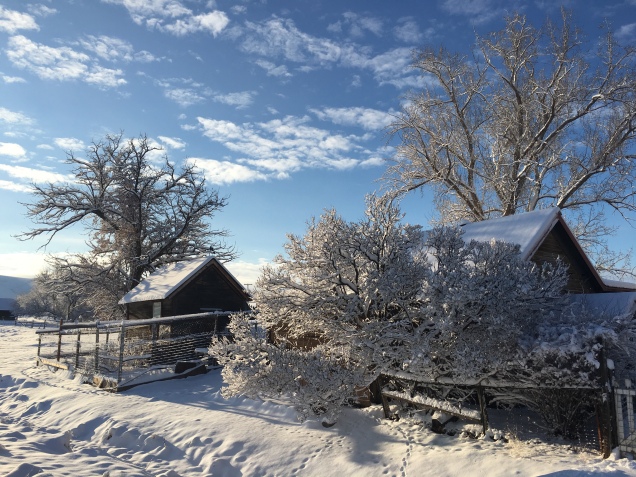 After creating paths, cleaning off the walkway and a path all the way out to the cars I cleaned off the cars themselves. It got just over freezing so I was hoping the snow would melt after I cleaned it off. I was fairly successful with this technique. Now that didn’t include the time I ended up on my keister after my feet become horizontal faster than my body. I hooked my car battery up to the charger. We just got the car back from the auto body shop and the next day it would not start. Now it was a very cold morning so I am not ruling out a bad battery after sitting idle for 3 weeks but the charger will let us know if it is truly dead or they didn’t get something hooked up correctly.

When I made it out to the barn, there was a new set of twins and a very jumpy mother. I tried to casually sort out the mother with little success. There were four ewes with white and black heads. I finally managed to corral them all into a corner and jump on a white and black headed ewe. I was wrestling her to the ground and trying to pin her down when I realized she was the wrong one. I gave up trying to catch her in the barn and opened up the chute, about half the mothers crowded in. The one I wanted foolishly followed them and I was able to wade in and snag her. The trouble was I had her babies in the main barn and she was stuck in the chute. I ended up just heaving her over the pen wall into the baby area. It was a struggle to get her over the wall. I snagged both babies and dropped them over with her. I found one under the feeder again! I had stuffed more straw under the feeders but the sheep keep dragging it out and the babies keep laying under it. Next summer I will be installing boards so that the sheep cannot get under the feeders. I just need to make a spot where the cats can get in so no mice have a predator free zone.

Next was driving the tractor up to the boneyard to drop off the ram carcass. I had to use speed, four wheel drive and positrack, to get up the back hill. We have a good six inches of snow on the ground. I was able to get up the hill after a couple of tries. On the way down the dogs and I stopped to let the mommas out to water and to lock Mika into the old milking area. It is now covered in straw and she will be spending the days and nights in there to keep her hoof dry while it heals. She does not like this so I will let her out this evening to go drink while I do the sheep chores and then lure her back with food and grain. The horses and sheep are very compliant when you offer them grain.

Next was clearing the driveway down to the road of snow. I like to do this whenever we have any significant amount of snow. This comes from living somewhere with lots of snow. Always count on the next day bringing more snow so you need to get it removed every day or it will get away from you. I also need to move a large bale of hay down to the cows. This is very hard when the snow is deep. I drug and pushed a path all the way down to the cow gate. I then got the dogs and pushed a bale down to the gate. The dogs were placed just inside the open gate to keep the cows from escaping and bum rushing the hay bale. I pushed the bale to the far end and wrestled the feed panels around it so the cows could not stomp it all into the snow. This should keep them happy for the next five to seven days. Mouse decided that he needed to save me instead of guard the gate. He is still a little too eager we need another year to mellow him out. By this time I am cold to the bone and headed back inside to warm up.

I needed to get Annmarie’s birthday present finished. I had a custom cutting board made for the kitchen insert out of Madrone with black walnut accents. The problem was I gave the measurements incorrectly. I measured from the 1 inch mark and forgot to subtract that extra inch. I took it out and ripped 3/8 inch off each edge and sanded it back down. I will use one of the cut off pieces to add a lip on the front of the cutting board. The lip is so when Annmarie lays it on the counter to use as a bread making board it won’t slide forward. I just need to get some black walnut 1/4 inch pegs to make this happen. I put it in place and put a bow on it as today is Annmarie’s birthday. She is miserably sick and has slept most of the day. We had to cancel our birthday dinner plans for tonight. 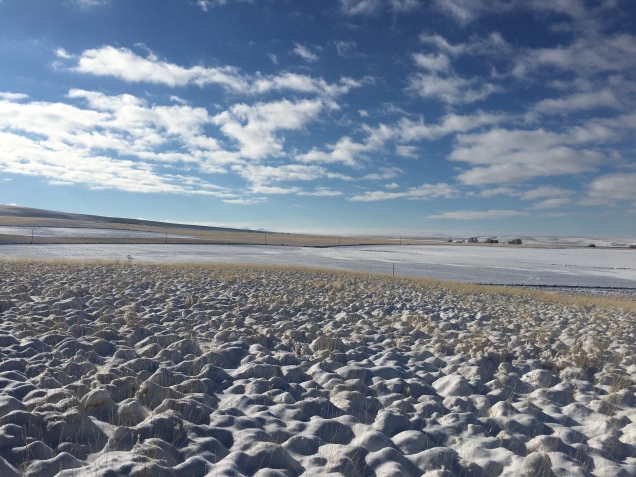 When I went out do do evening chores there were another set of just born twins! These are tiny little babies and both were wet. I ended up chasing everyone else out of the barn and laying down straw in the stair area. It’s its own area that we normally don’t use. I made a thick layer of straw and put hay and grain in it. I snagged both babies and dropped them into the straw. She came right in but kept running out when I tried to shut the gate. I finally managed to get the gate shut on the three of them. Hopefully, she will finish cleaning everyone up and be well bonded by the morning. No way those two twins would have survived the ram.