Annmarie is still not 100% but on the mend. This means I am still on chore duties until she gets better. I opted to start the day with oatmeal, toast and coffee. I am never in a hurry in the morning so I was prompted to speed up and get outside. I had shut the wooden chicken coop door last night as it was still a little light out when I got eggs. The finches were inside the coop, there must have been around 12 of them freeloading on the chicken feed and I did not want them coming back in or the chickens leaving. The raccoon has killed 5 chickens so far as they are too stupid to go behind the locked door when it gets dark. So I let the chickens out first then headed to the barn. Well there were three new babies in the barn and they looked like triplets as only one momma was paying attention to them. I ignored them and opened up the barn doors so the sheep could go outside and get a drink of water. Next I went to check on the momma with twins I put in the stairway area. Only one baby present, I had to dig around in the straw to find the little demised fellow. I went to the slider door to let the momma’s out and found another dead lamb trapped down next to the door! It had fallen down into the 3-4 inch gap and was on its back and could not get out. So both the carcasses went out by the gate and will be taken up to the boneyard soon. They will be well preserved in the snow until after the holidays. I fed the mommas and looked out into the barn and there were now three ewes with 5 babies and one huge orange baby covered in slime who keeps hollering and walking around. No one will claim the baby and after two hours I had to take the baby inside and dry it off so Annmarie could feed it and get it warm. Another bummer for the housekeeper, her 7th one this year and so far they have all survived. I tagged and banded all the babies before coming inside with the bummer. I wanted to give her a chance to bond and I needed to empty out the baby area and start over. 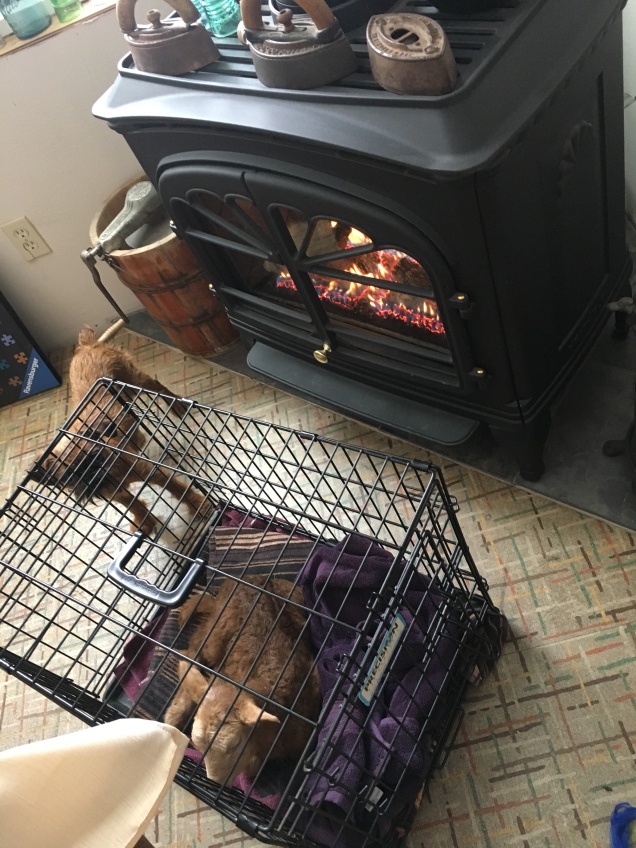 I went and got tools so I could do the two essential repairs to the barn. The first one was to dig out the straw and install a low board below the new feeders so a lamb could not slide under the feeder and get trapped. This went fairly smooth. 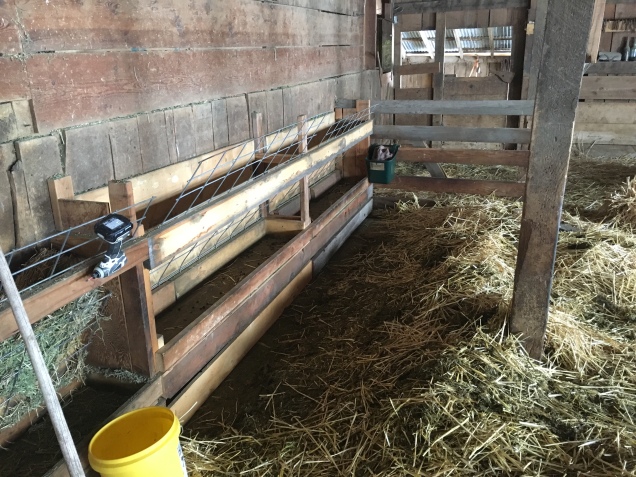 Next was to fix the gap problem at the sliding door. The opening is 3-4 inches wide as my 3 inch wide tape measure is buried in the deep end of the door. I had to do some digging to find a couple of scrap pieces of wood that would work, amazingly it was tongue and groove flooring and the tongue was intact and visible. I was able to find a piece of leftover tongue and groove flooring unfortunately the barn is crooked so I beat it into place and see a diagonal line across it. On one end I trimmed off almost two inches and down to nothing at the opposite end. I screwed in two boards to fill in the bottom support then cut my floor board on the table saw so I could make it fit. 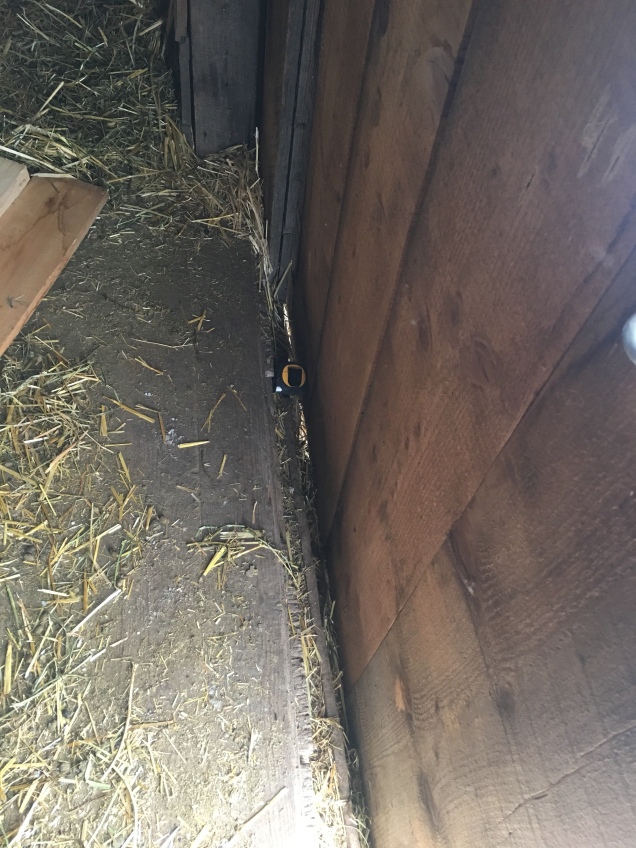 Here it is with less than a one inch gap between the door and the floor. I even placed a 2×4 outside to keep the door from kicking away from the floor creating another gap. It looks kinda funny as this wood is perfectly clean but that won’t last. 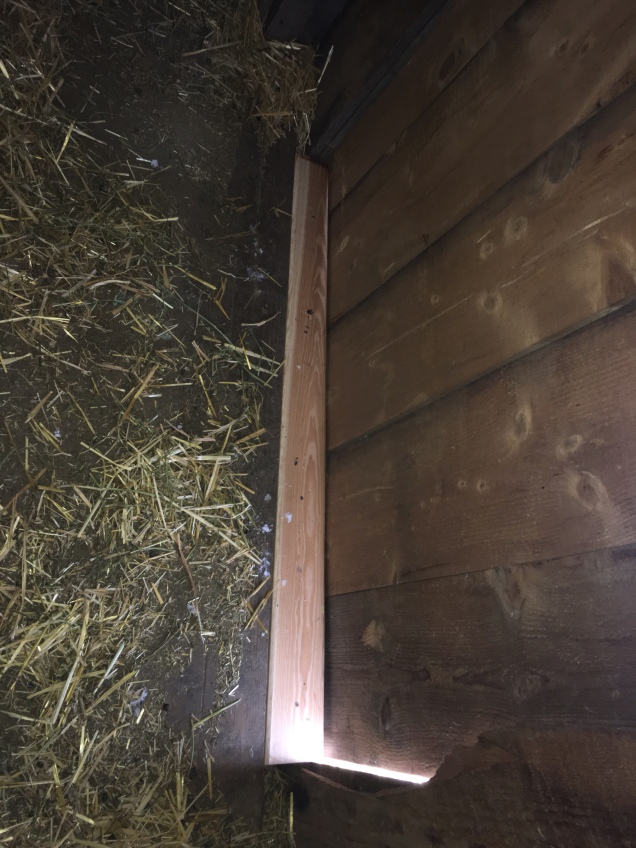 While I was working on the barn Annmarie texted me to tell me there was a ewe with twins out in the snow. I told her no there was not as I had gotten everyone in and fed an hour earlier. I looked while we were on the phone and yes she was right, twins covered in snow with momma trying to lick them clean. I chased all the ewes back into the barn then swung a gate panel to create an opening into the momma and baby area. The brand new moms from today are in this enclosure. They all did well. 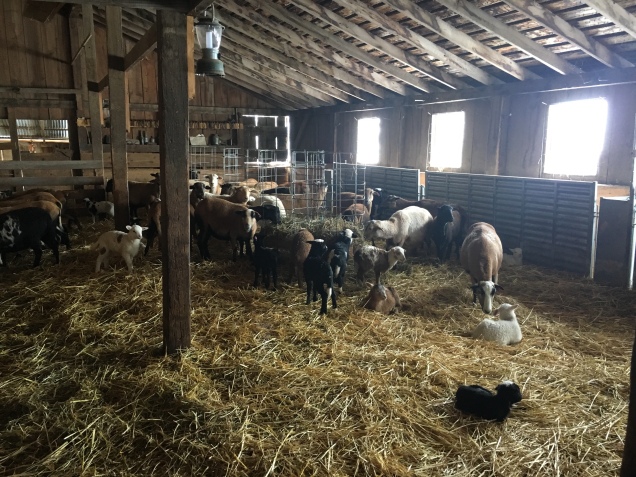 I had to go out late tonight to lock everyone in as its Christmas Eve and that same ewe had both her twins out in the snow. They had frozen snow every their entire body. I chased the ewes inside and tossed the babies after. She was already calling for them.

One thought on “Barn demise”