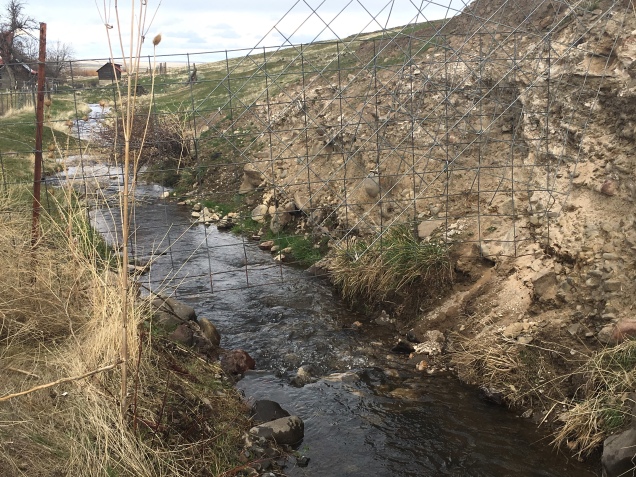 Today was the day to crank out the hallway and another wall in the living room with new paint. The downfall to this is I need to put blue tape everywhere first. I was almost done with the taping when I got a call from my nephew stating that the bull was no longer in his area and was standing outside the separated heifers enclosure. This means he got out again! I know where the hole is, he has to be going under the fence at the creek crossing. The problem with this is I cannot lower the fence down into the water because the spring runoff has not happened yet. If I lower the fence then Mother Nature will rip it all down with a sudden deluge of runoff in the back creek. I grabbed the dogs and walked up the back hillside to the upper gate and opened it up. I was thinking we could drive the Bull back up the hill and inside his area. This did not work as he did drive to the corner but then crawled under the fence again. Ugh! I just remembered at 8:00pm that I forgot to close the stupid upper gate!! Now I gotta go trudge up there in the dark and check for the bull then close the gate! There are days that the farm life is more work and less play than others.

Stupid dogs chased the bull out quickly then when I used them to try and push him away from the creek opening they pushed him back through the opening! We had to start all over again. The second time through I decided I needed to make something that would allow the water to run past but would keep the Bull from getting back through. I thought about making a T-post fence by driving a T-post every 6 inches in an arc in front of the opening. This sounded a lot like work and no guarantee that it would keep him in. I was looking around thinking when I spotted three old wooden posts so I wired these onto the fence leaning in toward the Bull. I wanted something else so I walked over to the old chicken coop and started digging around. I found a piece of corrugated roofing. I used an old nail I found on the ground and a rock to punch two holes in it and I found a piece of rusted 1/8 inch wire to tie it in place over the boards. I am hoping all of this combined will keep the bull from crawling under the fence again and let the water flow by. 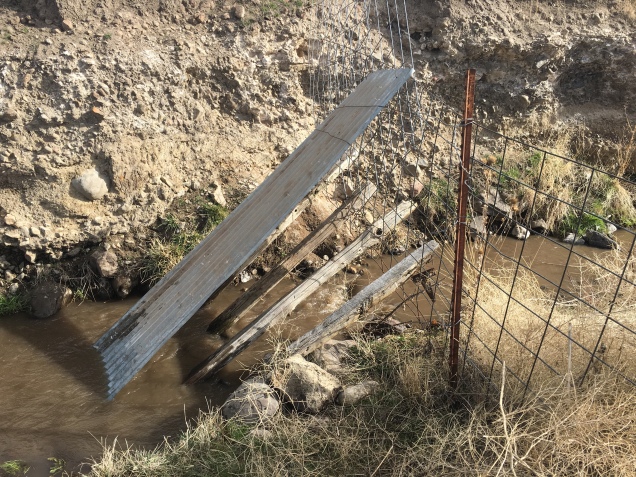 As I was sitting down to have a third cup of coffee I saw the bull going by the window. He was unable to get past my obstacle course. I had taken the time to use the Bull as a training tool for the dogs. I took some video but cannot upload it on the blog, our internet connection is too slow. I will post it to twitter in the morning. I got one clip of the bull calling for his women and one of the two border collies pushing him away from his women.

I did finish putting up all the blue tape in the hallway. No paint went onto the walls today. I had plans to finish the blog earlier but I spotted a deal on Facebook classifieds for some fencing material but I had to go pick it up asap. I hooked the trailer up in the snow and drove over and bought some T-posts, gates, smooth wire rolls, wooden posts and two sections of culvert. I brought a lot of cash but needed more. I wrote down all the information to mail a check and as soon as I got home I wrote the check and have it in a stamped envelope ready to go in the morning. There was even more snow down when I got home and unloaded the trailer.

As an added bonus I managed to purchase a stock rack for the pickup! I am going to pick it up tomorrow which is why I needed the trailer unloaded tonight. It only cost $200 but it does need a paint job! I just need to get some of that paint that you brush on and it converts the rust to a primer then I can just use spray cans to finish it off.

I did manage to draw up some plans for the back wall of our in ground greenhouse. I am loving the idea and can stack 3-4 high 50 gallon drums. I think it needs to be 20 feet x 10 feet minimum after doing some research. If you make them small the temperature tends to fluctuate too much. I would love to grow a lemon, orange and kiwi tree inside the greenhouse! Plus have tomatoes year round along with spinach and carrots and lettuce. The barrels will be filled with water and act as storage and heat sink. They will do double duty.