It’s that time of year again, in the search for cheap help that works hard I have yet again reached out to my neighbors and friends. I have scored another new helper. As is tradition here at Stewart Creek Somethings he needs a name for the blog. The longer I do this the more pressure there is on me to actually pick something good! This pressure could be self induced but it is still there and even before my help arrived I was aware that today was the day I would bestow a new moniker on another fellow individual. I enjoy the permanence of the written word, once the moniker is in play it can never be taken away.

On the proposed work schedule for the day was picking up boulders from the back hillside to line the yard fence so that Zeke cannot dig under the fence. He has to go on the overhead run every day still. Mouse and now Gizmo cannot get out of the front yard. Zeke is a firm believer in making your own exit plan.

The trouble with this plan was on Thursday there was no wind and it was a beautiful day. It was the perfect burn day and I still have a 8 acre field to burn. If I wait much longer then everything will dry out and I will have to wait till next year and I don’t want to do that. Thursday night someone told me it was supposed to rain over the weekend so it was a total do over on the priorities. Zeke was going to have to spend a little longer on the run when we go to work.

The young man came out early, dressed for work, rubber boots, jeans and T shirt and a bottle of water. He only forgot leather gloves but I have come to expect that so I always have extras stashed at the house. We loaded the propane tank into the back of the pickup and went to get more propane. They could not fill it, it kept leaking. Now this is the newer propane tank, I think the gas station needs to fix the washer on their propane nozzle. I was hoping we had enough gas to get the job done. Now this young man was a fire newbie, and had never intentionally set a fire before. I had him run the hose out, gave him the 2 minute safety speech and then had him light the outer edges of the field as I drove around the edge. He walked and started with the torch, I didn’t think about just having him sit on the tailgate. He is young and can use the exercise! We lit the whole outside and then waited 30 minutes and started to light patches here and there. At one point he starts playing with his hair saying how it has “so much body”, and its fluffy. His hair is touching his shoulders, he calls it a mullet (not long enough yet) and I couldn’t take it. I told him the reason his hair was frizzy was because its burnt!! He got too close to the flames and his hair curled up on the ends! Now he wasn’t that close, I kept checking his arm hairs to make sure they were still present every time he got back in the pickup. He finished the day with arm hair and eyebrows intact so it was a stellar day. After the burn revelation he kept playing with his hair and saying how he was going to get a perm. Hence a name was born, “Perm boy”. 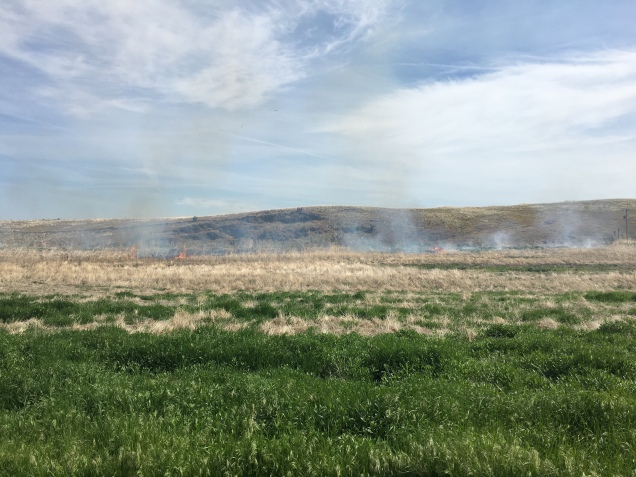 Perm boy and I burned along the creek, burned a stand of blackberries that really took off, we lit two piles of dead trees that had been there for years and we lit all the old patches of hay on the ground! We even burned up a broken hay bale over by the grain bins! I almost drove up on the hill and burned the old old fallen down barn but it still has a lot of dead tall grass all around it and I didn’t want that to get away. I need to get the sheep in there first and eat it all down then I can safely burn the broken up board pile that has not been a barn for 40 plus years.

Blackberries burning are pretty hot. I went down to look after it went out and discovered that they had totally filled in the entire waterway. I really need to burn out three more patches that are touching the water. If we had had a bad runoff year they would have acted as a dam and caused us problems.

We had an hour to kill before Perm Boy had to leave so we dug out the front creek in the yard by hand. It looks a lot better now. I need to continue this all the way up to the spring. Perm Boy splashed some mud onto his blue jeans and had a slight panic about them not ever getting clean again. We had the its only mud speech. At one point we had a discussion about the large dent in the door of his pickup and how to get it mostly out easily and quickly. I told him it added character to the rig. Besides every dent in my pickup was put in it by various teenagers at one time or another. He informed me that he would never put a dent in it, strong words from someone who just got his drivers license two days ago.

We got a lot done, I am going to spend the weekend discing the field so I can then start spraying weeds. Perm Boy did good, I asked him back as we still need to get rocks so Zeke can come off the run.