We had a plan last night for predator control and we stuck with it. Around 2130 Annmarie heard raccoons chittering on the back porch. We started breaking out the weapons and the Border Collies started looking for places to hide. They are not real big on loud noises. Our ankle biter Brussels Griffin was all excited and wanted to go outside with us and chase stuff. We had to be careful when we let Annmarie out the front door that he didn’t slip past her. He is pretty sneaky. I gave her time to get to the other side of the old house and then I flipped the outside light on, popped the back door open and started blazing away with my Walther P22 pistol. The laser sight makes shooting in low light situations amazingly easy. I had to spread the wealth though as it was a target rich environment. There were four raccoons and I only had 11 shots when I started. So after two rounds in an animal I switched to another. Two 22 rounds typically does not kill a raccoon immediately unless you are head shooting them. I am not a bad shot but I am not head shot on four moving targets going all directions at once good. I had managed to hit three and was trying for a fourth when Annmarie started blazing away. I never did see what animal she was shooting at so I am afraid there may be five raccoons not four. I had time to slam another clip in and run to the fence to look over for more raccoons after Annmarie hollered it was clear. We looked in the trees and did not find anything. I came back, finished off one and we ended up with three dead raccoons. I usually deal with bodies in the morning as I was going to have to wash off blood from the sidewalk. So we went to bed and in the morning I went out to move the carcasses before going to work. There was only one carcass! The other two were gone. Now before I have any doubters they were all dead. As in finish them off dead before we left the porch. I have made that mistake in the past and don’t do it any more. We are unclear how two of the carcasses vanished. All the cat food was gone also. We will leave out cat food again tonight but I would be surprised if they came back again anytime soon. 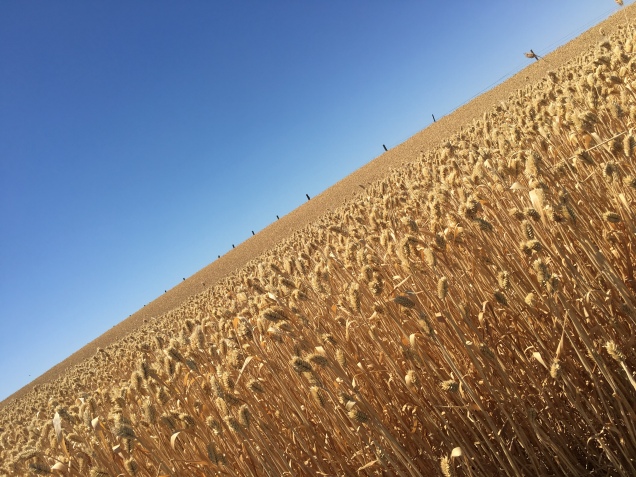 The club wheat is ready to harvest and should be cut next week. It is probably the best crop we have had in years. It seems to get better every year.

As I was stepping out of the pickup to take pictures of the wheat two little deer fawn twins jumped out from under a rose bush and ran out into the wheat. If you look at the picture below closely you can see one ear. Both fawns were right there in the wheat field. They are little and still spotted, momma leaves them all over the farm. I have spotted them at both ends of the place. We also have a few bucks coming in at night and early morning. This is good as my nephew and I both have buck tags this year. 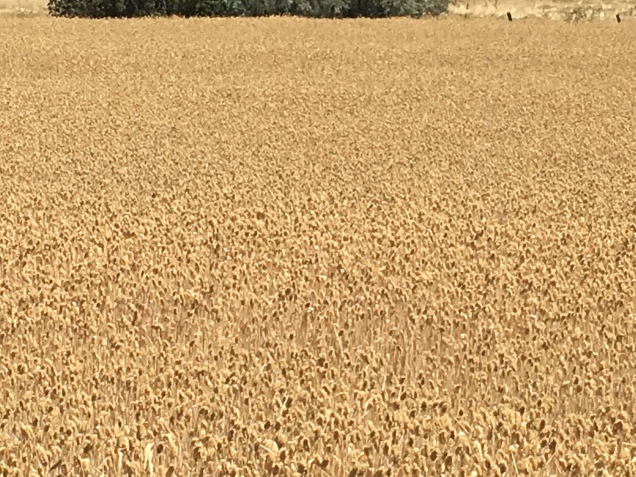 I picked up a 260 gallon water trough for the bull area today and 500# of wood pellets for the chicken coop. Bubba just about has the coop done and the pellets will be needed. He shoveled out the old sawdust and bleached the walls today. He just needs to lay down some new pellets after moving old ones. The nest boxes need to be cleaned out and the back room needs to be vacuumed up. He got the milking area of the barn cleaned out today also and under the stairs. Just the momma area, the feeders and the sorting chute need to be completed.

I looked at a set of discs today. It will cost $1000. I am going to have to break down and get them next week so we can finish prepping the fields for alfalfa.

We also got a quote for two miles of fiber optic cable to be strung out to the house. It’s not cheap but it is doable. We would rather have high speed internet than a boat, RV, four wheeler, new vehicle, motorcycle or snowmobile. So we should know by next week hopefully if it is possible and when it can be done.