It has been another long week. Annmarie kept telling me to slow down or I was going to make myself sick. I spent all day on the couch today sleeping cause I am sick. I am not sure if her words were prophetic or a curse, lets just poll all married men to get a final answer.

I did take it easy one night! I have started to work on cleaning my dog tag maker! I only used water, cotton rag and some 320 grit wet/dry sand paper to clean it up. There are some very precise rails, tracks and flat stops that need to be polished. I spent two hours working on it and barely touched it. I also realized some tools are required. I really need to take each piece off and clean it then reattach it. Luckily, it is so old I only need a standard screw driver, and an open end wrench. The trouble is I need a stubby screwdriver or an angled one and the same on the open end wrench. So I ordered special tools on Amazon and they are here except for my special open end wrenches. Those should be here next week. I will attack it again when I have all the tools. I am going to try and add up all the hours it takes me to just clean it up and get it functional. At this point I am going to estimate a 100 hours and I already have 2 hours into it.

The Expert came out to look at our predator problem. We had a very good discussion and I will call him after the wheat has been harvested. He is going to set up some traps and get a predator contract resigned. The farm used to have one so we will get a new one signed. So our farm will be added to the arial shooting plan. All in all I was very happy with the interaction. He remembered Ted and Tom and all their sheep. He also loves lamb, states it is the best meat of any animal. I agree with this statement.

The momma cow and baby stayed in the corral and milk barn area for three days. We fed them and used our 35 gallon water trough. It was incredibly hot but the cow would go in the barn if she wanted shade. I had to wait for help to get that calf tagged and banded. I went over and took out some alfalfa hay for them and fed 1/3 bale and set the other outside the corral so she could not get at it. I also moved the last of the hay from winter into the barn lot for the soon to be food cows to eat extra on. This was what the lazy alpaca were eating on instead of foraging. So the slugs found my stash of hay for the cow and started eating on it! You know they are lazy when they have to lay down to eat. 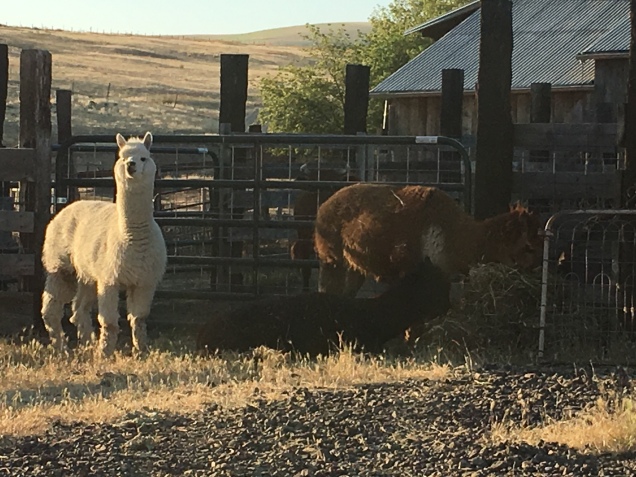 My nephew came over on Tuesday and we went out to deal with the calf. Annmarie was going to film us but we didn’t really give her time and had the calf pinned pretty fast. The nephew went for the all hands on deck approach and just jumped in and tried to grab a front and back leg and drop it on its side. He ended up on the ground and holding one back leg with the calf near a gate and a corner. I jumped on it and pinned it down then he climbed on top of it. We were right next to the gate hinges. This is important because I had a hard time finding two testicles. So I kept asking him to move the calf around a little bit to ease the abdominal muscle tension. There was a yellow jacket nest in the end of the gate. He got stung twice in the ear before we finally just grabbed the calf and slid him three feet away from the gate. It took me about five minutes to find both testicles and get them into a rubber band. The calf is a little old and you have to pull the scrotum through then kinda pop each testicle past the rubber band. I got them both so in a few weeks the calf will have no testicles. We tagged him in the right ear also. I did verify i had the right color tag this time but just in case all our cull animals will be tagged in the right ear if we are selling them. So even if I mess up gender the ear will tell us which ones to get rid of. I need to look but I think its number 13 or 14.

We then had to chase them out onto the back hillside and out with the other cows. Our no nutter bull has torn up our fence in front of the barn to get near her so he needs to be two fences away from her. She ran to the top of the hill so our nephew went up and chased her down while I opened all the gates ahead of her to get her out with everyone else. I really like the picture that Annmarie took below. 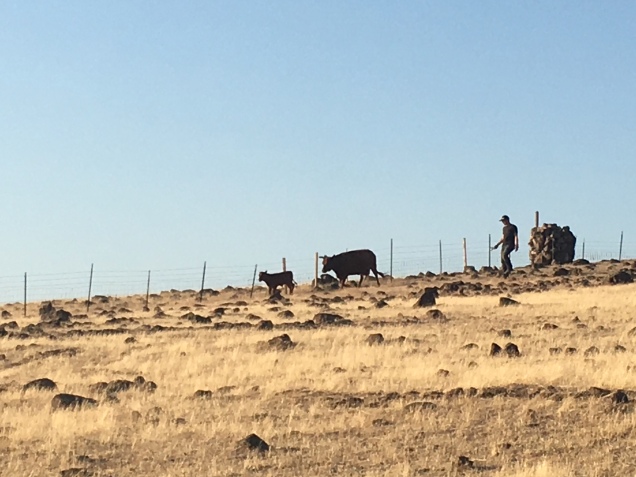 We then went over and finished working on the bull corral. We got the last four posts set in gravel and put up all the used feeder panels. The panels are heavy so we used the tractor to drag them over to the post line. We also had to use the tractor to lift sections of the panels so we could hook in the next section. The only thing left to do is to add the cow panels and chain everything to the wooden posts. I do need to finish filling the last rock crib and put up four wooden boards. After that I need to clean out the old wood scraps and all the old fence materials. I also have about four fence holes to fill in. I also need to drag the ground and level the area out. Once that is done I need to install the water trough. I may need to put In a couple of gold fish in the tank to keep it clean. I am at 85% completion! In three hours I could have the fence done the rest is to make it safe and provide a spot for water. The water trough will hold 235 gallons of water and we are not going to use a pump. I will be hand dipping water from the spring into the trough. I just thought up a bucket arrangement I can attach to a railroad tie that has a hose attached to the bottom that I can just bucket into it and then the water will flow into the trough so I don’t have to try and throw the water through the fence. That will make a mess.