After the dry summer and having to feed for 6 weeks we needed more hay. I found another 10 ton local and started to pick it up on Wednesday. This is not as easy as it sounds as we had to load it manually and unload it again by hand. The bales weigh 100# each on average and those heavy ones are twice as heavy as the rest. Luckily I had help from the Hay Man. He came over and unloaded with me. He stacked the stack higher with the old bales as they were lighter then we stacked the new ones into the machine shed. The stack is high enough now I can throw some plywood on top of it and fix the broken beam. I have the new beam now and it needs to go up this week so that it doesn’t warp. 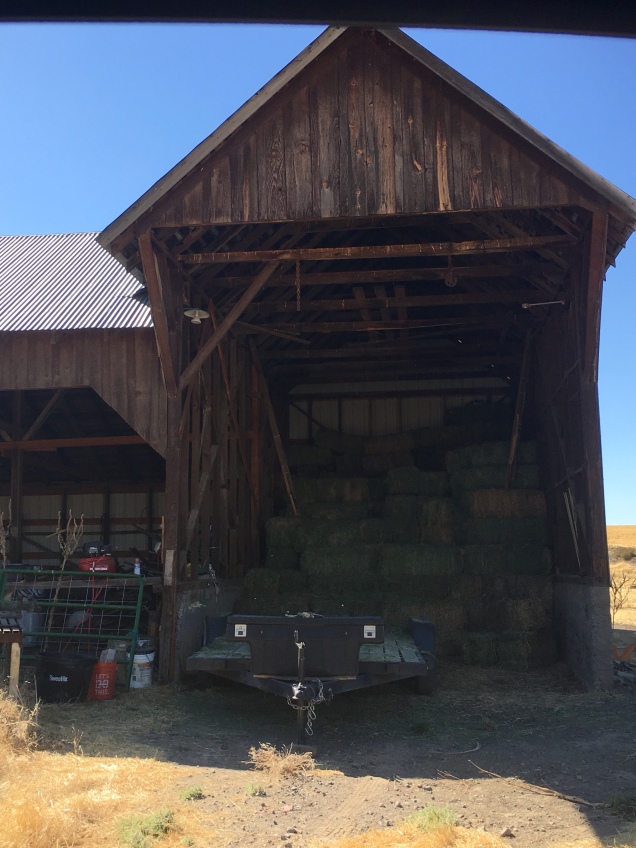 Hay Man and I then went and looked at the upper fields and discussed the grass and hay plans. I had no idea that you needed to bales the hay with dew on the row. Plus you have to have the moisture content of the bale correct or they rot or catch on fire! This is going to further complicate things. I had to call a halt so that I did not die from moving the hay. We will do another four ton and then I will unload the last two ton myself. The days of being able to do ten ton in a single day are over. Now if the hay elevator worked we probably could have done 10 ton but it needs to be welded first. I have begun the welding class at the college but it is going to take all quarter for me to learn how to do it passably. I spent 2.5 hours last week one night and still could not do four simple welds. So now I am behind and need to play catchup.

My mother-in-law and wife conspired against me this week to get me to feed the cows again. I believe the cows are fine, I do know that there is zero green in the pasture below and it looks like they could be starving but its not winter yet. This is my go to line when we talk about feeding before it gets cold. I never win and end up feeding the animals but I feel like I should always voice my issue. It doesn’t change anything in the long run but I like to take a stance, even if it is futile. So I pushed down another large bale of grain hay. No one came running, not the cows or the sheep who were 100 feet away. They had already eaten down the first bale to nothing so they must not be starving. Most starving animals will mob me when I bring out hay or at least run over when they hear the tractor. Not this time, I did notice that the next day they are all camped out around the easy meal.

It was opening deer season this Saturday and I expected to spend my normal two hours hunting for a little buck. No joy at all, I have spent almost 7 hours this weekend and have not fired a single shot yet. There is a little tiny spike buck that keeps showing up in the wheat field but he is super spooked and when I get out of the vehicle he starts running away full out. I had a nice shot this morning but there was a doe standing directly on the other side of him so I had to wait for either one of them to move and then it was too late. Luckily, I have vacation this week, a nice happy accident, and I will work on getting some venison on the table later in the week. These hawks are all over the place and I managed to follow this one until I got a nice shot of it flying, not too shabby considering I was using my cell phone camera.

There are a lot of pheasants this year, but the odd part is they normally jump when you are wishing 50-75 yards of them so you can never get a shot off. This year they are holding tight and they are everywhere. We counted 25 in one morning but had 15 other times and that is without beating the bushes. Some pheasant hunters are going to be pleased.