Friday was my first day of vacation that I actually did not have to go into my paying job. I have been on PTO since Wednesday on paper, reality is not always the same. This allowed me to play catch up on some things.

I went hunting and managed to spot the little spike buck that has been in the wheat field every morning. I went by him and thought he was a doe. On the way back to the house I stopped one last time and looked at all the does and spotted the horns. My paper deer tag covered up the horns. He will be very good eating, I was able to pick him up and carry him to the cooler without any help. I would like to think that after moving ten ton of hay this last week that its pure muscle strength, but since I felt every bale I am not sure that is the correct answer.

When we first moved here a neighbor made custom mailboxes for us out of old gears. The paint has started to flake off and show rust so we had decided that it was time to take them over to Hermiston and get them bead blasted and powder coated so they would last for another 20-30 years. Unfortunately, we still need our mail so I used a bunch of pallets to create a temporary holder. I plan on dropping these off in Hermiston next week. 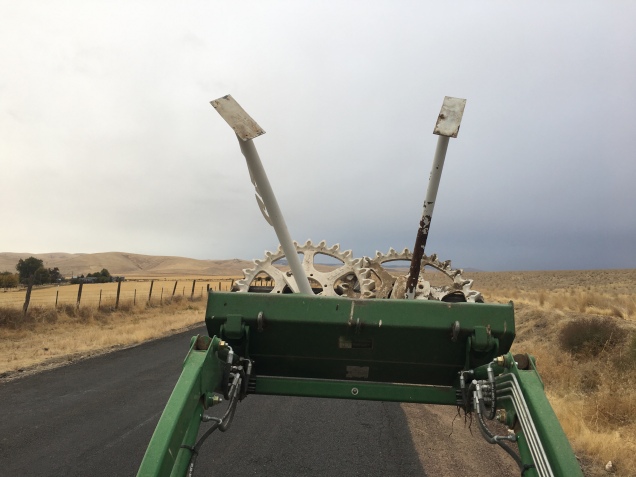 Thursday we got the last six tons of hay into the machine shed. I only ended up with three blisters and only one of those tore open. I definitely don’t have farmer hands. I still take care to minimize the calluses on my hands so it doesn’t affect my paying job. I need those baby smooth hands for a reason.

I had a friend message me as we loaded the lasts two tons onto the trailer that she wanted to borrow my trailer. Great timing! I said come over ASAP as I need to unload the last two tons into the machine shed. They showed up 10 minutes after I finished unloading the last bale and closing the gate.

I picked up 4 sheets of plywood to lie on top of the hay so that main beam can be replaced. I will be laying it out this week and wrestling the beam up onto the hay. I will cut it on top of the hay. The beam weighs 165#, I asked when I picked it up. There are two other boards to replace also. 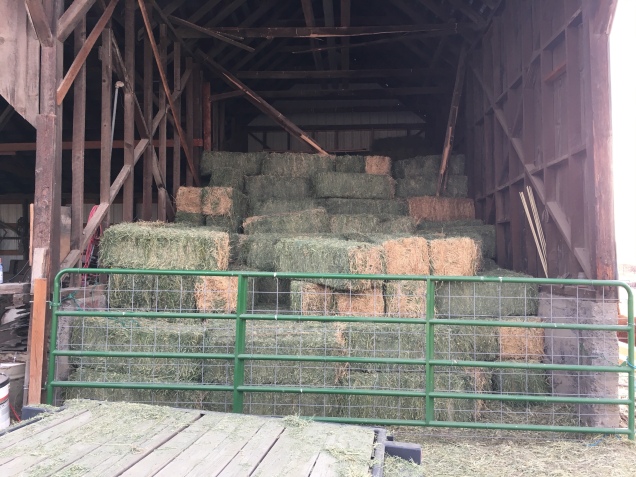 The alpaca think they are starving and have been hanging out and eating the alfalfa scraps. They are even ignoring the green grass for an opportunity to eat alfalfa leaves. They dig through and pick out just the leaves before eating anything else. We are taking bets on which color of alpaca is the next to be bullied to death. We did separate them for a couple of weeks, it is supposed to help as it throws off the group dynamics but it seems like they just fight more when they get back together. 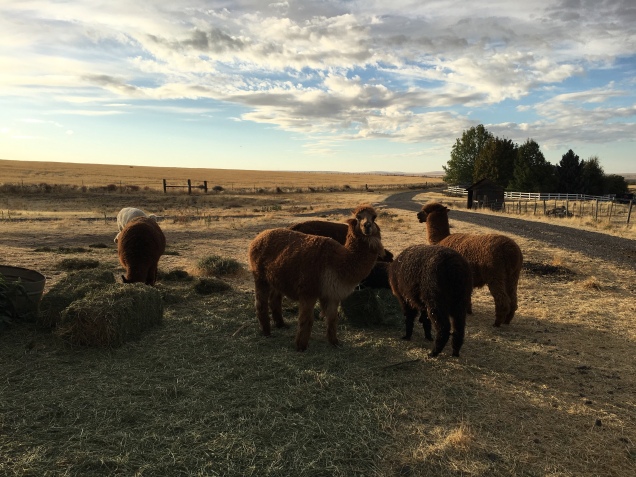 It was a day of finding missing items. I had misplaced the Bluetooth speaker that normally lives in the bathroom. No music during the shower was killing me! I have been looking all over the place and spotted it yesterday when I was eyeing the dog tag maker. It was sitting on the corner of the maker blending in with the color. I will be moving the dog tag maker into our master bedroom this week hopefully. I just need to talk my nephews into helping move a 300# chunk of iron 30 feet. We are getting felt pads for the floor today.

I was out in the old house tossing the cardboard boxes from our beef onto the “to be burned” pile stored out of the weather when I looked over at my waders and spotted my good pocket knife hanging from the chest of the waders. This had been missing for six weeks. I still need to find my Sawzall though…

It rained!! First measurable rain in over 65 days. First good rain for over 90 days! I am now under the gun to get the grass hay planted. I will be working those fields one more time. We ordered a chest mounted seed spreader that will hold 20# of seed at a time from Amazon yesterday. I will be walking the field to seed it. If that works well we are going to start tearing up and reseeding all of the bottoms to increase our feed capacity. If I can get them good enough we may even hay a few of them in the spring.

I learned something new that I should have known on Thursday, sheep only have a gestation of 5 months not 6. This would explain many of my issues with predicting when the sheep are going to have babies! I have thought for the last 8 years that it was 6 months not 5.