Annmarie said the sunrise was beautiful. I was inside nursing a cup of coffee and doing the dishes while she went out to check on the lambs. 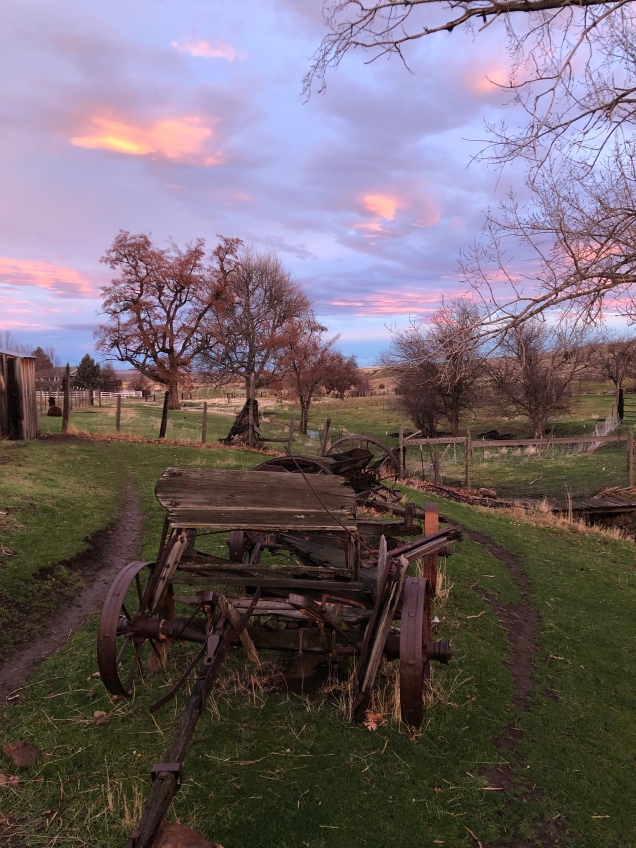 It has been 44 hours since our last post and we have only had one lamb born in that time frame. Honestly, sometimes the life of the farmer will make you crazy. The timeline is not set by you, its set by the animals and the weather. Even after all these years I want to drink coffee and take it slow in the morning and Annmarie has already been out to the barn and is now making us mashed potato, ham and onion pancakes for breakfast while I “blog it”. 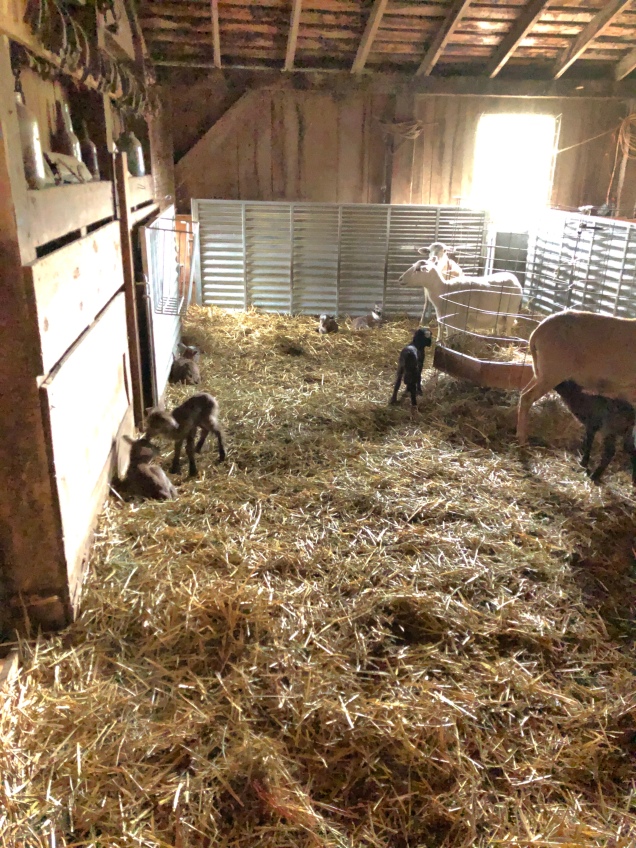 The last 24 hours has been full of those teaching moments. Thursday night I woke up to Annmarie hollering “Chickens!” Followed by a slap to the chest. We sleep with the windows open year round and so when something is picking on the chickens we usually hear their death squawks, it is a very distinct scream. We have an automatic chicken door, if the stupid chickens would just go inside the coop before it gets dark then they would be perfectly safe. I have been getting eggs on a more regular basis but I don’t go out every night. I have noticed over the last two weeks that 1-5 chickens are protesting and refusing to head back to the coop until the automatic door is already shut. When I do go out and notice them I throw them inside the coop, unfortunately I don’t always go out and the predators seem to be more reliable than me when it comes to visiting the coop.

I leapt out of bed and grabbed my glasses and almost ran downstairs naked, but its cold outside and the death knell had already been sounded so I figured there was no saving the chicken. I grabbed the first bathrobe I could and ended up with a thigh high robe and headed downstairs in my slippers and robe to confront another chicken destroyer. I grabbed the trusty laser sight Walther P22 pistol and ran out the front door. I went right for the coop via the front yard. I wanted to catch the varmint in action! I spotted feathers as soon as I got out of the yard, there was a trail leading out of the coop yard door headed toward the barn. I started following the feather trail in hopes of finding the cause of said trail. I went over by the barn, looked in the front creek, flashed light over the hillsides and under barn to no avail. I headed back to the barn and spotted a chicken over by the old house. It was the source of the feathers and it was still alive! So I decided to leave it and complete my patrol. The last place to look was over on the dry creek side of the old house that runs behind our house. A HUGE fat raccoon was waddling away and he was already about 60 feet away. I quickly discovered a few problems. When you shine the super bright flashlight on the object of your desire, you cannot see the laser dot. 60 feet is a long way to shoot a pistol at a moving target and after three shots there is so much smoke, your super bright flashlight now makes it look like light is emanating from your head. To combat this shroud of light surrounding me I pointed the flashlight way off to one side and focused the laser dot near said enemy and blasted some more. All in all I hit nothing, Annmarie is now ribbing me about my shooting accuracy and just going out and plinking is not the same thing. So after the sheep are done lambing I will be going out after dark with my trusty Walther P22 pistol and shooting at my target in the dark with a flashlight only. I may have to resort to doing it in a bathrobe and slippers or just the slippers to mimic my combat environment. The battle was lost but the ongoing war is not yet decided. I will not give up! 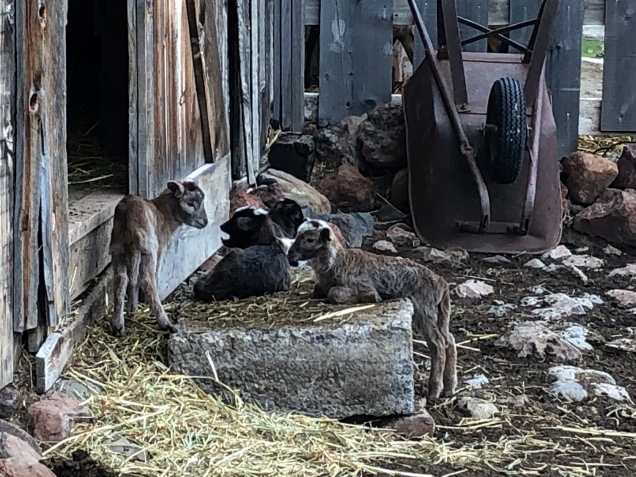 So as soon as I get home yesterday I am walking down the sidewalk and Annmarie hollers from the barn that she needs some help. I expected this as we were going to try and go to the movies. The next words out of her mouth brought dread to my head. She cackles “you better bring the shoulder gloves”. There is only one reason to grab the gloves, someone needs help birthing a lamb. I have only had to assist twice in eight years and so far I have a ewe survival rate of 50%. Annmarie and I have this discussion every time I think I am going to have to pull a lamb out. I don’t like it. She says her dad did it all the time. I tell her she grew up on the farm so she should do it. She tells me I have helped deliver human babies so I have more experience. I tell her they are in no way the same as you don’t need a shoulder glove to help with a human birth! She then states I have done it twice already so am the more experienced as she has never done it so I get to do it again. This is typically done with me laying on the barn floor and Annmarie holding the ewe down. I dread it every time it comes up, we have the exact same conversation every time and every time I end up wearing the glove. I grabbed two gloves just in case and went out to the barn.

She had isolated one ewe and her single baby. The baby was huge and she was worried that a second baby was stuck. The mother was active, interactive with her lamb and eating and drinking. I told Annmarie I don’t go in until the situation is desperate. This was no where near desperate, personal crisis averted. We fed and watered the rest of the sheep, Annmarie had already rearranged the barn and added in the two wire gates. We will do some more pen building today. 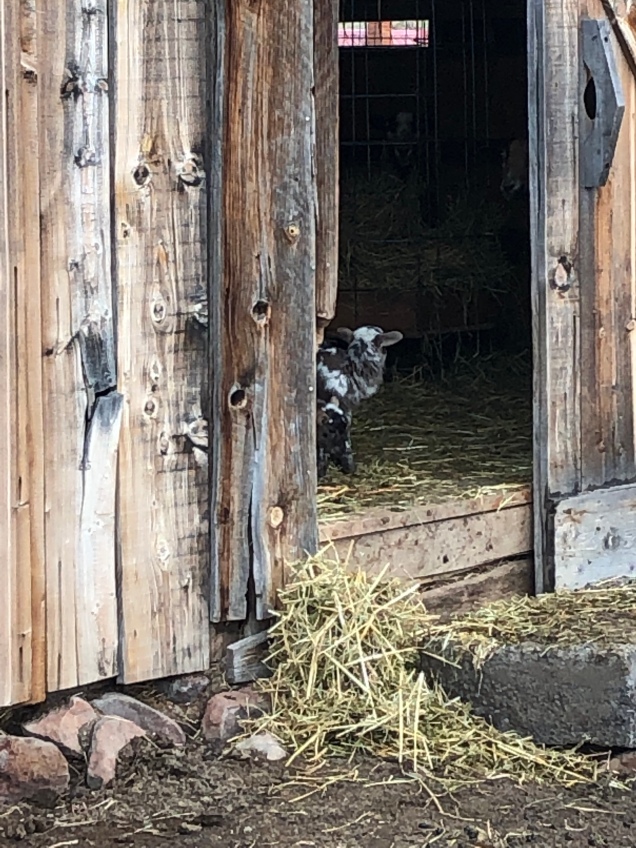 After the movies I had to go out to the barn in the pouring rain to check on that ewe and her baby. Luckily I got some new mud boots this week and going through the mud pit to get to the barn is pleasant. I keep tying to plant some kind of grass or cover that will last the summer but this rock bluff gets parched and hot and everything dies in the summer. 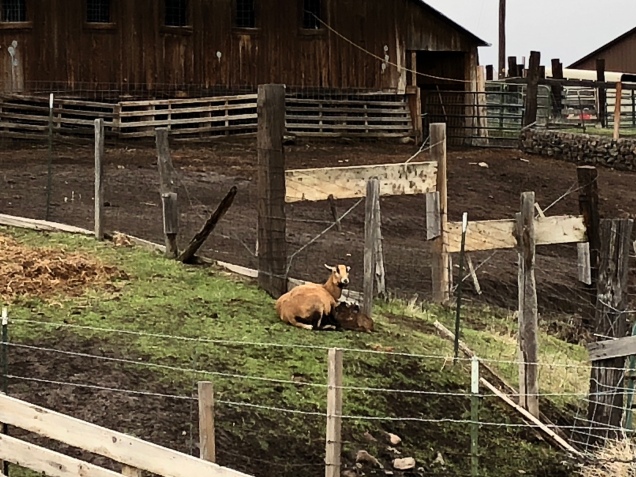 Every picture has baby lambs hidden all over the place! 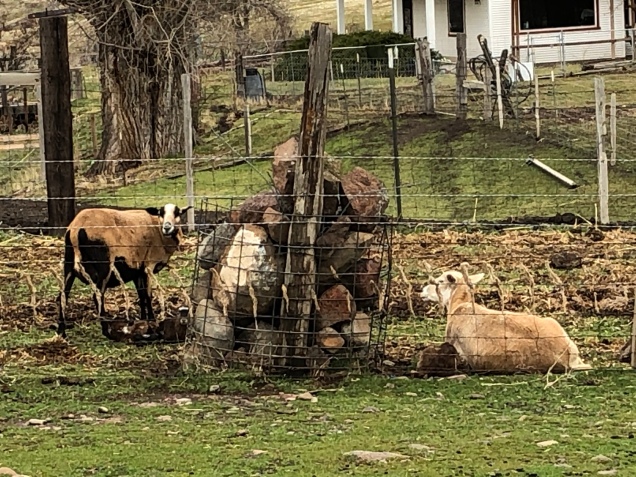 One thought on “Lambs squared”