I would have started fencing on Friday morning but Tex was sick. I had plans of going to work until 1200 during which Tex would have been making progress but alas it did not happen. I still only went to work until 1200 then went shopping for more railroad ties. I looked at a new Ruger Mark IV 22 semiauto pistol. I need something a little more accurate than my Walther P-22. It’s on the want list now.

This morning Tex came out and I fed him breakfast to get started. Homemade hash browns, bacon and two farm fresh eggs over easy all cooked in bacon grease! It was good. One would have thought we would run outside to get on that fencing but the honey do list came first. We moved all the furniture back into the spare room and even left one piece out, an old wash basin stand. There was no real room for it. We filled the closet back up and now that I have shelves between the duct work in the closet I am using those 12″ wide shelves to store empty canning jars. They tend to accumulate and I run out of spots to put them before I make an attic run. Annmarie discovered my second stash of egg cartons I store in the closet also. I keep my third stash in the attic. We are good for about 2-3 years.

We then moved the display case out of the upstairs eventual bathroom and I replaced the broken leg on it. Annmarie cleaned it up. It had been there for 12 years. We just have to decide what to put in it. I have a large collection of medical supplies I have accumulated over the years.

We also picked out two maps from the late 1800’s to take in and get a price quote on framing. We have about 30 maps of our local area and initial townships that are hand drawn on linen backed paper. The question is which ones do we frame first? 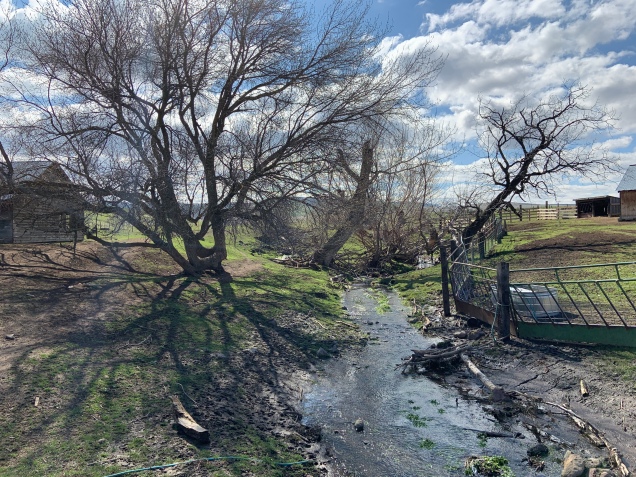 I sent Tex out first to start cleaning up the front ditch fence crossings and tossing all the burnables onto the burn pile. I told him to just use the bucket of the tractor as a wheelbarrow. I stayed inside and did the dishes and a few more honey do items. When I went outside I started the fire and Tex kept bringing load after load of wet soaked rotting wood but he kept going to the same place in the barn lot. I grabbed my coffee and told him we needed to take a look. He said good cause he needs a chainsaw. He was cleaning up the entire spring head!! Those trees have been down for 11 years since I burnt out the 30 foot high tumble weed patch that was a tree grove. The only tree that responded to fire was the black walnut, it started to actually put on walnuts after that. So we had a discussion that I do want that cleaned out and he can borrow a chainsaw but we need to get the fence done in the barn lot first. That is a great task for when I am at work!

So I had him start tearing out the creek crossing that the bull and sheep kept going through. He is to remove everything from both railroad ties on the edges of the below picture. Anything burnable goes on the fire. It was a mess of wire, panels, rope and broken boards, along with flooding debris. While he was doing that I started to pick rocks. We needed rocks for the two rock cribs and alongside the creek to keep the dirt on the hillside. 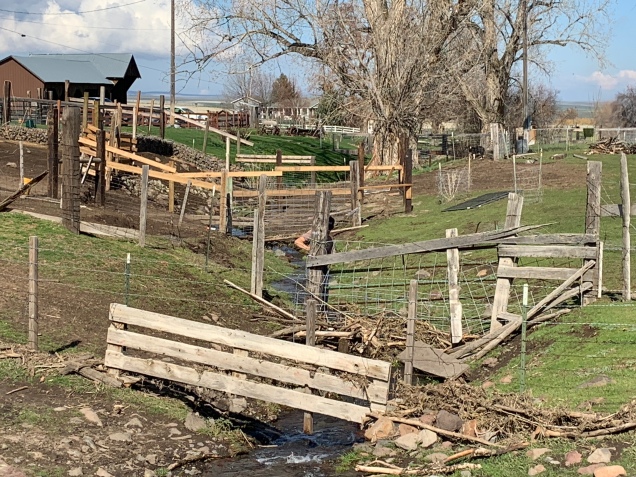 I spent from 1000 to 1330 hauling rocks when I realized I was hungry again. We had a gourmet lunch, Nalley chili with Hill’s all beef hotdogs. The hotdogs got browned then the fry pan deglazed with fresh onions and garlic and all of it thrown into the chili, top it off in the bowl with some shredded cheddar cheese! That is a lunch that will stick to your ribs and keep you going for hours.

I went back out and picked more rocks. Tex started filling the rock cribs with the small rocks and the large rocks were saved to be used down by the ditch. 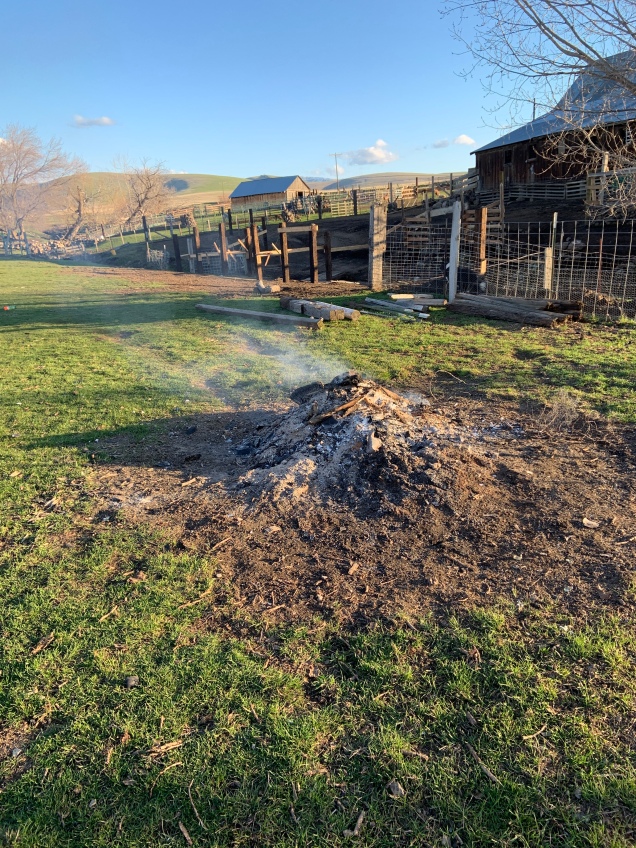 We got all the rock cribs filled, I put about 12 rocks in only, Tex did the rest. We then started to wrestle with the large rocks and tried to get them on a shelf down by the water. This was not easy and especially not easy after they roll down a muddy hillside and go into the front spring. Muddy wet rocks are not easy to move around. Tex managed to get most of his rocks into the creek.

I again fell into the water. I slipped on the muddy hillside and landed flat on my backside into the water filling my waterproof boots. We got all the rocks I had brought down near the water’s edge when Sarah came and told me it was 1815 and time for dinner. I had left my watch and cell phone in the house at lunch so I had no clue what time of day it was. It was quitting time anyways, Tex had rolled his second from last rock into the water and the two of us could not lift it up into place and could barely roll it into place. The rock was only about 150#. Earlier we had been moving several hundred pound rocks into place. Tomorrow I will get more large rocks and we will start putting up wire fencing. I would like to get flower seed on the ground.