Tex came out again today, the guy is a glutton for punishment, my favorite kind of worker. He started to put up wire on the fence posts and I continued picking up rocks for the spring edging. Every time I went out to the rock pile I spent a little time dragging the ground with the box blade to catch rocks and miscellaneous debris. I would like to be able to mow it with the tractor if needed but since I have not gone over the ground its not safe. I have ruined two blades on the tractor mower already. I have also had to have the mower welded on and beat back into shape. I am trying to be more cautious now.

I managed to get most of the rocks off of the main portion of the skiff of land. I went here because there were lots of rocks. There are a lot less rocks now after two days of hauling them off. I have managed to snag most of the very large rocks. I need about 20 more 200# + rocks. They stay in place when you put them in the dirt when they weigh that much. Our largest one we set was around 600#+. My tractor will only lift 800# so it makes it pretty easy to estimate how much a rock weighs.

As I was finishing up and dragging the ground smooth I spotted a small piece of metal. I hit it with the box blade and this 80# chunk of grated iron came loose from the ground. This thing would have eaten my mower for lunch! I am going to figure out a place to use this I am just not sure where. I was thinking it could go outside one of my sliding barn doors as it has sides and a grate to prevent it from holding water. It’s a thought I may have to pursue. I want to get the aluminum pipe moved over here for storage. Any animal that steps on it makes a dent. If I store it outside of the animal area then no one can step on it. It can stay there indefinitely if needed.

We have 3-4 barn cats that we know of and this one is the only one we see on a daily basis. She wants attention all the time but after biting Annmarie we don’t reach down and pet her. Annmarie was on antibiotics for a week. The cats are doing their job as we have not seen a single mouse in the barn this winter. We are hanging our extra gates on the walls and it makes the window look weird.

I used to be able to ignore my stomach and keep working straight through until dinner time but that is not the case any more. I made Tuna surprise for Tex and I for lunch. Tuna, noodles, can of cream of mushroom soup, some onions and a can of peas. It is the bomb, I almost never make it as Annmarie doesn’t like tuna and it makes a bunch.

Tex appreciated my culinary prowess. We got our side of the fence all completed! I got both gates installed with a few little quirks and after some added wood the gaps were small enough to keep the sheep inside. I always forget how long it takes to hang a gate or door. Its far longer than you think it should be. 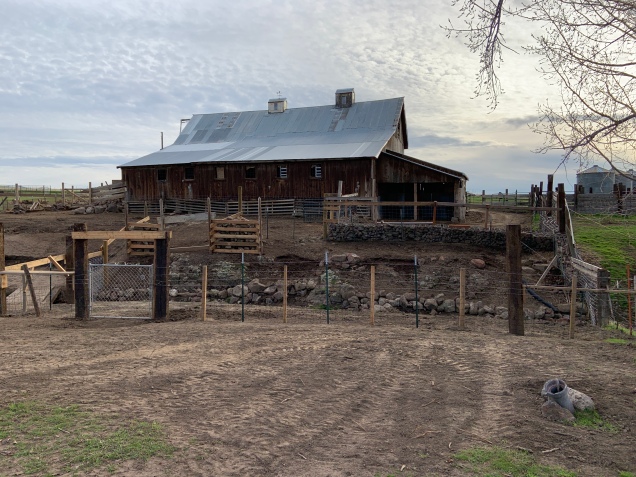 We got the bottom row of rocks down by the spring all put in place. We have started another row of rocks about a 1/3 of the way from the top. My hope is it will help keep the elevated rock walls from sliding. We put in a bunch of T-posts next to the rock wall to see if it is actually moving. I even went so far as to cut most of the posts off at the fence height on the horse enclosure. I got Annmarie to agree to let me use the old mailboxes as bird houses. I am going to split them into two or three compartments and drill holes in the mailboxes. I could maybe even do four depending on the size of the box. We have several old mailboxes lying around. I want to mount these on top of the railroad ties. I kept the old 12 foot 4×4 that used to hold the power cables in the air to the barn. I am thinking I could build two bat houses and mount them to the pole and bolt it to one of the posts on the rock cribs. The bat house idea is going to have to wait.

We managed to get woven wire up near the barn but not four strands of smooth wire. We ran out of time. We need more rocks for the second rock wall. I may try and get a couple of loads every night after work so this upcoming weekend Tex and I can just dig in instead of waiting for me to haul them in.

We are going to finish that flower enclosure then set up the sprinklers on our front hillside. That is were the water for this flower enclosure is going to come. I don’t want to plant flower seeds until we have water or else it’s going to rain on a consistent basis.

Tex doesn’t wear gloves much. I went up to him today and pointed out that he was bleeding from a cut on his hand. He looked down, surprised that he was cut, and then just shrugged it off and went back to work. I already checked with his mother and he is current on his tetanus shot.