The kids killed it on their hay pickup day and managed to fill the first hay bin room. They moved a bunch but did not finish. Tex underestimated how much was left on the ground. There are 1050 bales to move into the barn. So Hoss came out the next day to finish picking up hay. I had gone to work for a couple of hours to finish stuff and to try not to give everyone the plague. The first load took him 1.5 hours to load and he commented on how long it took to do alone. I kinda chuckled as most of this stuff I have to do alone and it takes 2-3 times as long to do it that way. I told him how to stack it on my way to work. 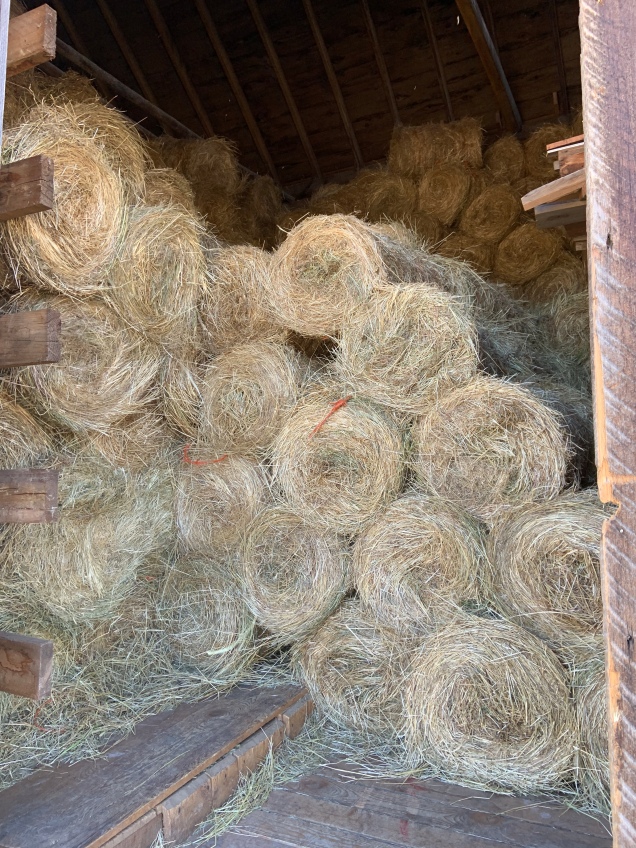 While at work I start getting these frantic texts from Annmarie saying there is an issue at the farm. Hoss sends me a text about an “issue”. I ask for a picture, because really a picture is worth a thousand words.

Annmarie sends me this picture. It could have been so much worse! The trailer is still on the road. It’s sitting on rocks in the front and back so it’s stable. The axle is not bent or pinned on any rocks. The bank just gave away. Now I failed to mention to Hoss to not use this crossing. I knew the rocks were giving way. After the flooding we had this spring they washed out the gravel and created a soft spot. I had filled the gravel twice but realized that the cure is going to be me pouring concrete walls about two feet to either side of the culvert all the way down to the water line. There is no other good fix. I failed to pass on this nugget of information to Hoss or Annmarie. So Hoss started to unload the hay and when I came home we looked at it.

He wanted to get some handyman jacks and lift it up and push it over. I finally looked at it and said we could just use the tractor. I would drive it down to the spring and get the bucket under the tires and push it over onto the road then drive around and pull it out. It only took five minutes once we had it unloaded. Now Hoss will use the other crossing only until we fix this one, which will take a while because cleaning out the barn then building fence are our priorities. 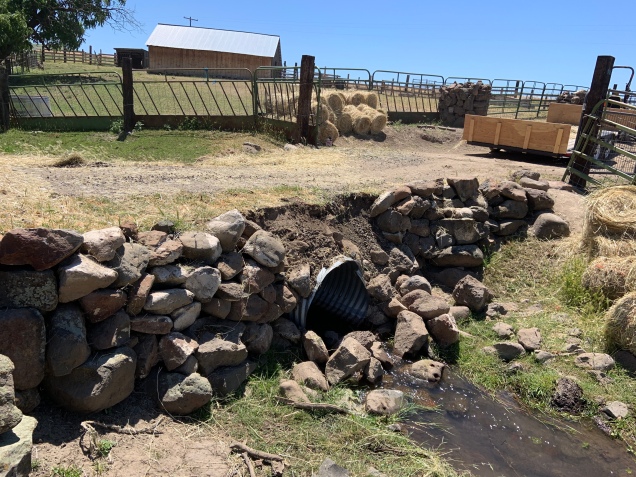 Simple communication could have averted this, one more lesson for me on why I should talk more.