To be fair, there was a reason I slept in this morning, I was up for several hours in the middle of the night volunteering with the Quick Response Unit, so Annmarie let me sleep in. She did not want to wake me to let me know the dogs had been fed so she left a note for me in the one spot she was sure I would find it, the hot water dispenser! I make French Press coffee every morning no matter what, it tends to be the first thing I do in the morning. Now she did call and wake me up as there was a screamer lamb out in the field and she thought it might have gotten trapped on the wrong side of the fence last night. I was having a hard time sleeping in anyways, so I made a cup of coffee and a large thermos of coffee to go and let the horses and sheep out and up into the upper pastures. We have been trying to lock them in every night due to the coyotes and there have been wolves spotted nearby also.

The one good thing about staying up half the night was that I found out how to get an agricultural burn permit and what I needed to do to burn the fields. I need to do it for the weed control. Anything over 2 acres needs a permit and a burn perimeter. So I started today working on a burn perimeter.

Before I could get going I needed to clean up the tractor. I should have fueled it as I only had half a tank but if I have a full tank I can run for 8 hours and this limited my time away from the house. So I blew out the air intakes on the tractor hood, the radiator screen and the radiator. As I was contemplating the ambient air temperature and my last tractor overheat I was trying to figure out what would make the tractor heat up? Working hard, but how, pulling lots of weight? Running PTO? What about forcing the engine to work harder with less oxygen? So I popped the air filter can open and took out the air filter, holy smokes! I was able to beat out about 3# of dirt out of the filter then blew out another pound with the air hose. I was covered in ultra fine dust before I even got started. Luckily, there are two filters and the inside filter was almost spotless. I cleaned it but there was not much dirt at all, just a little skiff. I put it all back together and headed out to get the arena rake.

I thought I might be able to use it, but after fighting for 15 minutes to get it attached to the tractor and taking it down the side of the fence line twice I could tell that it was not going to work. So I brought it back, took it off and found the disc setup. I practiced in the barn lot getting the disc to work properly.

I ended up drinking a lot of dust with my coffee throughout the day but it was still good!

I ended up going around the perimeter of three fields and now have a 30 foot fire break around each field. This was me after a couple of passes. I tried to go upwind as much as possible but it seems that 50% of the time that is just not possible, so not all the brown in my coffee was creamer.

The middle pasture had a nice break already from us clearing it to install the new fence. I disced up the dry ground to be visible dirt so there will be no fire creep.

Last pass for this field. I got three fields done and only have one tomorrow. I did have to come in and get more fuel but that was good as I blew out the tractor radiator and intakes again. I never had an overheating problem today and it got to 92 F. On the way back I stopped at a blackberry bush to eat my fill, I had skipped lunch. They were amazing but the yellow jackets thought the same thing. I finally had to start shaking the berries before tossing them in my mouth so I would not toss one in with a yellow jacket on it inside my GI tract! After drawing blood a couple of times on the thorns attempting to get away from nasty stinging things I gave up on the berries, I had already eaten a couple of cups anyways. As I was headed in I remembered that I promised Annmarie I would pick plums from the tree in field. We got a few pounds last year from it, the first time in 12 years but this year the tree was loaded. I guess it likes all the water it can have as the new spring runs right next to it.

I moved the ladder around to pick the fruit but its in a U-shaped depression and the fruit ladder does not want to function in that environment well. I got some off the top of the tree and then resorted to lifting the tractor bucket four feet off the ground and crawling it it to use it as a platform. That first plum was super sweet and literally burst with juices as I bit into it. You can see the juice near my foot in the tractor bed! I started to fill up the 2.5 gallon bucket and tossed the overripe or bug eaten ones to the cows. One cow was wiser than the rest and he realized that there is nothing to be afraid of and everything to gain by coming up close. 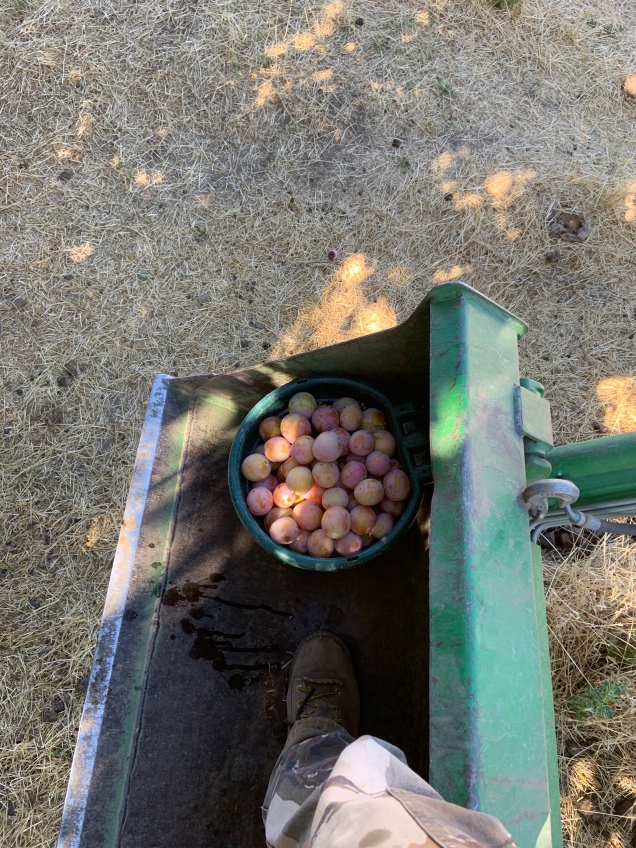 I have no idea what type of plum these are as the tree is probably over 60-70 years old. They are golden with a rose blush and yellow meat and very sweet. I started to throw the other cows fruit as they were missing out. Everyone felt like it was safe to come over as long as I was in the tractor bucket.

My stupid chickens are getting agitated. I am pretty sure the raccoons are coming down and harassing them at night. Now they cannot get into the coop, but the windows are open and the chickens can hear them. I have metal fencing stapled over the outside of the windows to prevent them from getting in through the screens. I only had one brown egg tonight. I cannot get only one egg from 11 chickens per day, the math does not add up.