Since my recent rental of the next size up John Deere tractor I have decided to come up with some necessary items for the tractor I will be buying in 6 years. Some may say this is planning a little too far in advance but the blog is forever and these are good points.

1. I still need a small tractor. It has to be under 35 HP to operate the new hay equipment so 30 HP seems ideal as my current one is 25 HP.

2. It needs to have a comfortable seat. The new seat is not as comfortable as my old one. My old one is wearing out so I will need to research an aftermarket seat.

3. It needs to have a manual seatbelt. This is a must! The rental had an automatically retracting type and it does not stay tight enough. The manual one I can tighten down snug over my thighs and my butt stays in the tractor seat no matter how many bumps you hit!

4. Fuel efficiency is a must. In going up 5 HP my fuel consumption went up almost 50%. It was a dramatic change over my little tractor.

5. Some form of tool holder needs to be able to be mounted on the tractor. It is necessary.

6. The damn cup holder needs to be deep enough that the coffee cup cannot jump out of it when you hit a bump.

8. Some form of secondary dust filtration system. Most tractors have a grate on front of tractor then there is a screen of some type over the radiator. I need a third line of defense. They also need to be easy to clean out. I work in lots of dust and dry weed debris. It clogs things up fast.

9. It needs to have chain hooks welded to the bucket. I can do this. This is such a lifesaver when it comes to lifting things with the bucket.

If I think up any more things I will be sure and write them down.

Saturday I had to go out into the rain to let the sheep into the barn. Once they figured out I was opening up a path to the barn they came running! I went in to check on my baby chicks and counted adult laying hens and there are only 8 left. They are slowly getting picked off! The predators are winning. I also had one dead chick. No apparent cause of death so now there are 24.

Tex was late this morning. I think he had forgotten we were working cows today. He was out by 0800. I had taken both border collies out to go get the cows pushed to the barn. I happened to find a deer shed almost buried in the ground. This is the second one in as many years that I know about. I have a buck tag but not sure it will get filled this year. I have only seen a few deer on the place. I will be doing some actual hunting at the end of the week.

Tex and I finally got the cows into the barn lot and managed to get the two 6 months cows sorted off as they will be going up with the steers for a while to get away from momma. Sorting off the three babies was not too bad as we were able to leave most of the cows in the main area. Once we had it down to three calves in the corral we were ready to start. I promptly dropped my castrating/tag bin off of the fence railing first thing. I definitely need to make a shelf for it so its not on the ground. Tex grabbed the first calf a little girl who is only a couple of weeks old. She bawled but he just picked her up so she could not fight. The other two calves were both boys. They also happened to weigh around 120-135#!! Luckily, I had grabbed two of the extra large bands for the bandarator as backup. Once Tex grabbed that first calf and threw it on the ground it was pretty obvious I was gonna have trouble. I tried but could only get one testicle in place. I switched to the large bandarator and it was smooth. For the last calf I placed the bandarator and tagging pliers in my back pocket loaded and ready to go. Tex tried multiple times to drop the calf and it kept getting back up. I finally intervened and ended up at the head of the calf on the ground with my left arm under the calf holding a front leg and the calf and I pinning my arm in place. I was over the calf’s shoulder and neck and Tex had the back two legs. I hollered for him to use the bandarator but it had fallen out of my pocket. He managed to get it and still hold onto the calf. After he banded it I worked my arm free and placed an ear tag. My back has been bothering me but had been improving. Wrestling a calf is not a good way to improve your back pain. The odd thing about the cows is we used tag #19 & 20 or the two boys and only #9 for the girl. Our sheep tag numbers are very similar but the cows not so much. This might explain why we band so many cows.

Annmarie and I had been talking about moving the front porch stairs to over to in front of the actual door. The door used to be directly in front of the stairs but we moved it back to the original opening. To do this the evergreen shrubs needed to come out. The fire department guys had been warning me that they were a fire hazard anyways so I get to kill two birds with one stone. I was really afraid that the wood would be in worse shape than it was but it was okay. Amazing since no one has seen it in 30 years. We were able to use the tractor to pull the bushes out of the ground. I don’t think this would have been possible without all this recent rain.

Once we had cleaned up we popped the stepping stones out of the ground also and then hosed everything off to make the mud disappear. 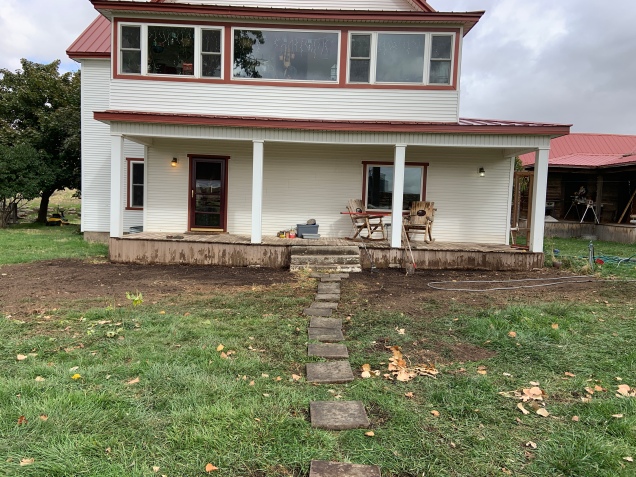 I wanted to burn the scrap pile but it was not a burn day. So we are going to have to wait a little longer. I had Tex cut the bushes away from the house and the back tree was touching the house so it got trimmed back also. We found a huge 18″ bald faced hornet’s nest in the upper corner of the house. I had no idea it was there and its not visible from any of our doors or windows. Tex was knocking it down and as it started to fall I told him not to get any on him. He asked why and I said because the thing probably has hornets in it! He got a little panicked looked on his face but it was only 40 degrees outside so he had little to worry about. I went inside the house and unleashed an entire can of wasp/hornet spray on the ground and the overhead nest. They are no more.

Once all the leaves fall off the trees we will need to do some tree trimming. This upcoming weekend hopefully we can do more catch up. 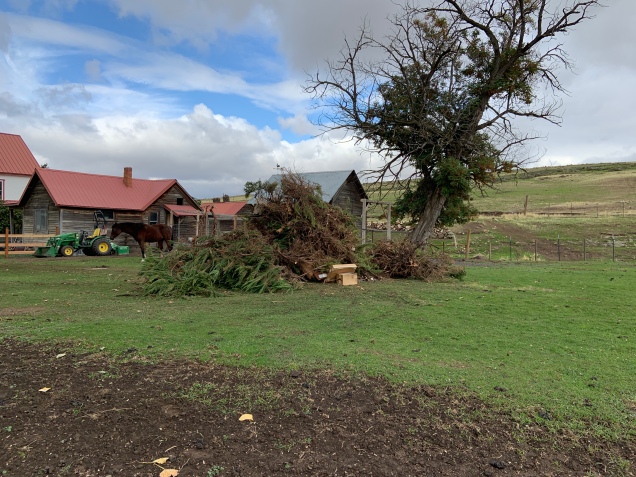