Yesterday Tex came out and we did the cleanup and winterization stuff. There are still three hoses that need to be rolled up and put in the shed but the rest of the stuff is done. Tex got leaves washed off the low roof as they hold the moisture and can cause leaks. We got the front hillside planted with clover! I will be happy if only 50% of the seed takes off, anything to choke out the cheatgrass that is currently growing there. We had a talk and Tex agreed to help me with the lower fence.

I put gravel in the Alcatraz area so the butcher cows don’t make a mess down by the spring. We will see how it works in a few weeks when they get put in there for the all you can eat buffet of alfalfa.

This is the fence that I got the grant to install. I had been holding off on it but he may leave in January and not come back. I just needed to know that if we started this project he would see it through. He has been a little flakey. He agreed and got my point so Annmarie and I went to town and bought everything we needed for the first section of fence, $2000! This would be why I normally go to the junkyard and buy all my stuff used and beat up.

As soon as I took the tractor down to start drilling holes the cows came running. They thought I was going to feed them. They do not need food, I have confirmed this by putting out a protein block that they are half heartedly occasionally licking on. They are content to go around and eat the grass that is still growing. Once they realized I had nothing for them they wandered off. 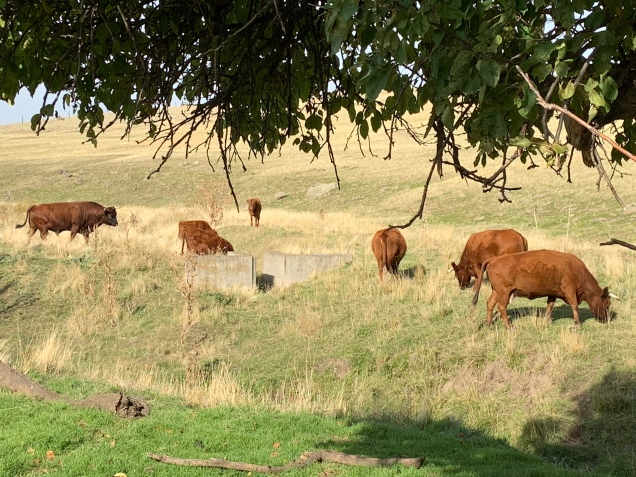 I started to drill holes but was getting no where. I decided to look at the teeth on the auger and realized that the outer tooth was almost gone! I swapped the inner and outer teeth hoping that it would work better. It did! Before the day was over I had one long tooth on the outside and on the opposite side I put the long tooth in the inner spot and then flipped my short piece upside down so it would be point out. This worked the best but I also realized that my inner cone is almost worn down to a smooth piece of metal also. I definitely need to do some repair on the auger but for now I just have to use it! Who would guess that after six years I would wear the teeth off of it! Tex laid out and marked all the T post locations and started to clean out the holes I managed to get drilled. I have six holes to finish up tomorrow.

I was unpacking the trailer and a few railroad ties had shifted. I went to loosen the strap and ended up getting swatted to the ground by the gates crashing into me with a few hundred pounds of railroad ties on top of them. It rung my bell but I didn’t black out. I have to say that shifting loads have smacked me around twice and they are not any fun.

I will get the parts for the auger repair this week and my pump upgrade for the sprayer is in the mail. When it comes we will get it installed and the get the sprayer strapped down and ready to go. I want it all prepped and ready to go in the spring. We can feed using the tractor instead of the side by side. I may have to start the thing every couple of months just so it doesn’t forget how to do it.