We keep thinking that lambing season is going to be over, but it has not happened.  I went out one night and had five lambs running around and could not find all the mothers.  Annmarie had to come out when she got home and discovered that one of the lambs from the momma/baby area had gotten out.  She claims it was from me going through door, I attempted to deflect that to squeezing through the wooden slats but that has never happened before so it was probably me.  I had been focusing on moving two others who were laying by the door a third one could have snuck by.  They are sneaky little creatures.  They are still coming in waves, I went out this morning and found two sets of twins.  It took me a while to find the first mother and while I did that one of the lambs disappeared into the crowd.  By the time I found that one I discovered its twin and found another mother with twins.  Luckily, she had self isolated in a back corner so it was easy to to push everyone else outside.  I put both new sets of twins under the stairs. 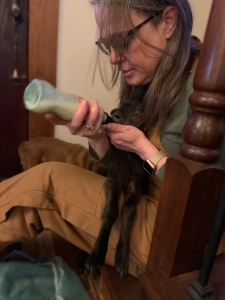 Yesterday we had one twin that was hollering so Annmarie brought it inside the house for me to feed before work while she finished up feeding and watering everyone in the barn.  I sat on the hallway floor and convinced the lamb to drink a few ounces.  It was not the best bottle drinker.  It got better with practice.  When Annmarie came back in she wanted to make sure it was topped off as she was going to take it back outside and put it in with its momma and twin.  She took it out as the ewe had been head butting the lamb.  They do this to knock them away when they think they are not their lamb.

When Annmarie came back from work after noon, she went out and checked on the lamb and it was hollering and cold.  She set up a pen in front of our propane stove using the dog pen.  Once the lamb was fed she just put the lamb in the pen until we could get the lamb to its forever home.  We are going to leave the pen up for a couple more weeks until the lambing is complete.  It works way better than a cardboard box or laundry basket. 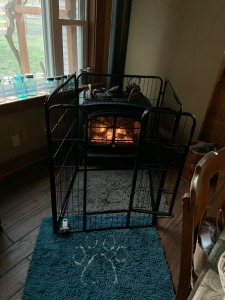 The baby chickens have finally decided to start laying eggs.  The mini eggs are coming a few every day now.  I feel guilty about adding them into our selling rotation but everyone has learned that the chicks start small and get bigger.  We have the same few customers so they are used to it.  If it starts getting out of control I will switch to 18 packs and charge the dozen price.  We have done that before.

We are going to work the sheep today.  We need to touch and catalog every single sheep on the property today.  We have a buyer for our butcher weight lambs and we don’t know how many there are.  Annmarie has been working diligently on a free database and we are starting to use it faithfully.  Today we ensure we have every single animal in the database and then we will be able to track and give accurate predictions.  We looked at upgrading the database this week to allowing us to do calculations and reports but they wanted $250 annually per person!  We would have done the $250 but not $500-$750 if we add Sarah.  It’s not worth that.  So Annmarie helped me with an Apple spreadsheet to do some of the calculations.  We probably need to create an all encompassing report for the entire year next.

I stayed out in the barn after sorting off the two sets of twins under the stairs.  I moved the other two mothers and babies into the momma/baby area.  This allowed me to tear down all the pens inside the barn making sorting much easier.  I moved the feeders out of the way of the sorting chute.  I dug out a couple of paths in the straw covered floor to allow me to move the panels and operate a couple of doors in the chute system.  The straw/compost/excrement can get 12-18” deep in the barn and the chute is mounted at barn floor height so accommodations have to be made the later into winter we use the system. 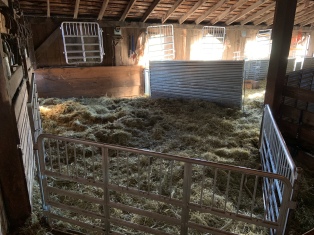 These were the two sets of twins I found out in the barn this morning.  There really are four lambs in there.  There are two brown ones up against that wall on the left side of the picture.  Both of these ewes are older, their tags are so worn that there are no more visible writing on them so we use the tag color to guess their age.  I change the tag color every couple of years on the females.  Red was the very first color we used to start tagging the female sheep.  I have used the same blue tag color since inception since the boys all get sold off.

My wife made spreadsheet.  I scrolled over to just show the last entry and totals.  I am going to mockup the annual one based on quarterly reporting from items we need for taxes and our annual USDA report we file every January.  The USDA is very diligent about getting a hold of us and going through the report.  They send a couple of paper requests then start calling us until we complete the report over the phone.  I have yet to fill out the paper and get it in on time.