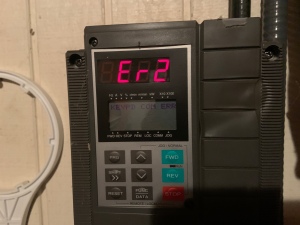 Friday morning we lost water.  Now this happens at least annually and he had just had some power blips so I figured the pump had just kicked off.  The controller resides in the basement of my mother-in-law’s house.  I called a few times and realized she was out of the house.  Around noon I called and she was home, she attempted to reset the pump without success.  I went down to try and see if I could get it started.  The pump controller is pretty complicated so I try not and mess with it too much.  Annmarie has to reprogram it when I do just randomly push buttons and that takes some effort on her part.  We could not find the instruction manual after I tried to turn it off and on (would not do it) then pulled the fuses and got the error code to change from “OC3” to “Er2”.  I then attempted to search the internet for the control manual without success.  I even called a pump distributor with no success.  The longer I stared at the case the more the weird melted plastic section stood out.  I could not ever remember that being there.  I touched the plastic case and discovered that not only was the case melted but that section was hotter than anywhere else on the case.  I called Pendleton Electric, as they do well pump controllers knowledge gained courtesy of Google.  I was able to say I thought the pump controller had burned up and to read the tag on the size with the power ratings.  They wanted the Hp of the well motor but we don’t know it.

We went out to the barn to start sorting sheep and got a call that the repair guys were here.  It was less than two hours from the time I called!  Annmarie went down to answer questions and oversee.  This left the Child and I to sort all of the sheep.  This sounds like a great combination unfortunately sorting out animals is rough on a good day.  If you want to know how well you can work with someone then just try and sort animals with them.  You will realize that everyone else are a bunch of idiots and if they would just do what you ask of them this entire process would go smoothly.  Now when everyone thinks the same thing it tends to cause some problems.  Now that we have more 6 foot panels I was able to create a sweep gate in the back of the barn.  So as we push more sheep down the chute we can keep moving the sweep gate and shrinking their waiting area.  This was Annmarie’s idea but we never had enough panels or lightweight panels to move making this possible.   It worked great and will now be something that happens every time.

They were able to put in a new controller and yes the old one had burned up after 15 years.  The new one has a pressure display in pounds and nothing else.  It’s just a grey box.  You turn off the pump now by pulling the fuses.  Finally, a sensible design.  Unfortunately, they could not get the pressure up to 60#.  They maxed out at 57# which means we most likely have a leak.  Annmarie walked the entire length of the pipe and could not find any water bubbling up. This does not mean we don’t have a leak as Annmarie reminded me there was an area down by Donna’s that was wetter than we thought it should be last year but it never bubbled but it was near the front spring.  So we are going to look at that area hard this spring after all the rain stops or when we lose water totally.

The Child and I had to make some executive decisions as some of the lambs were marked for cull and keep.  Their temperament in the chute decided their fate.  The child doesn’t like sheep with “crazy eyes” and wanted to cull all bad behavior out of the herd.  We saved around 6-8 female lambs to replace the old ewes.  We had to save all the old ewes as they have babies.  We have 6 no tag Barbados sheep.  We had a brand of tag that the sheep could pull out by reaching through the woven wire fences and lost a lot of tags.  We are probably going to have to retag them so we can track their babies.  They all look alike and we would like to track their productivity.  We are going to sort off the ten cull ewes before we put the ram back in with the main herd.  They will spend most of the summer in the orchard so we know they are not pregnant when we sell them.

We ran them through the chute system and had 22 to sell written down and 23 in the pen. We tried to recount several times and discover who I had not written down.  We finally gave up and ran them back through the chute backwards.  All the keep animals were on the inside of the barn so the far end was empty and isolated from the main herd.  Before we got halfway through them we found the one I had missed.   I had set it up so those sell animals would stay in the milking area of the barn and the corral area.  This way when our buyer shows up we can load them and be done in under 15 minutes. 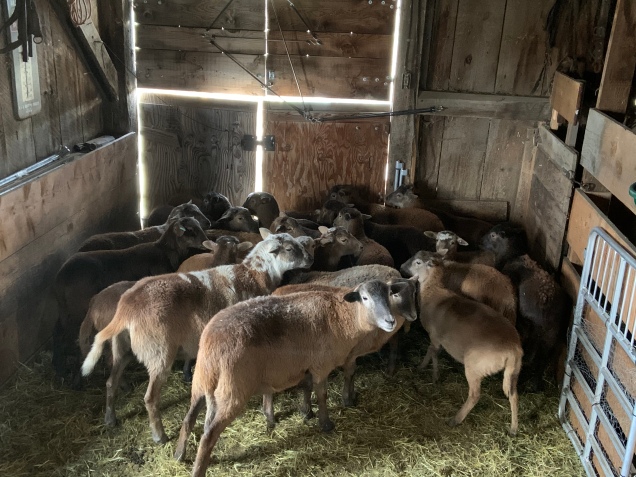 I had to feed the bull and his two charges and the ram next.  The bull had gotten tired of the four panels surrounding the large bale of alfalfa and had hooked and thrown it off with his horns.  This is one of his talents that he knows and performs on a regular basis.  I pulled a large bale of alfalfa out of the machine shed and pushed it down to Alcatraz.  I had to open the gate to push the bale inside but this let the bull, 2 steer and the ram out.  I thought, foolishly, that they would follow the bale of alfalfa back into their pen.  Nope!  The bull ran over to the far gate and started hollering for female cows.  I got the bale situated and the panels around the new bales.  Both horses were in Alcatraz happily munching on alfalfa when I went out with the tractor to chase the animals back.  No one wanted to back to isolation.  It took me about 30 minutes of tractor wrangling to get everyone back into the pen.  I considered going and getting the dogs but last time I lost my voice convincing them that I was boss.  The tractor worked eventually.   The dogs do best in wide open spaces.  I was unable to get either horse away from the all you can eat alfalfa buffet so I just locked them in with the cows and ram.  Annmarie got them by just walking over to the pen later that evening.  They just walked over to see her, I am not their favorite or their leader.

Removing 23 teenagers, age 6 months or older really opened up the space in the barn.  I was surprised.  It was enough of a difference that we might end up with a teenage herd running around in the barn lot next winter.  We can open up the old lamb shed for shelter and just feed them out of the back of the barn.  I will need to think up a feeder type for the outside of the building.  The real problem are the horses.  What do we do with them?  They need some shelter, they will share with the sheep but an all you can eat buffet is not healthy for them despite what they think of the idea. 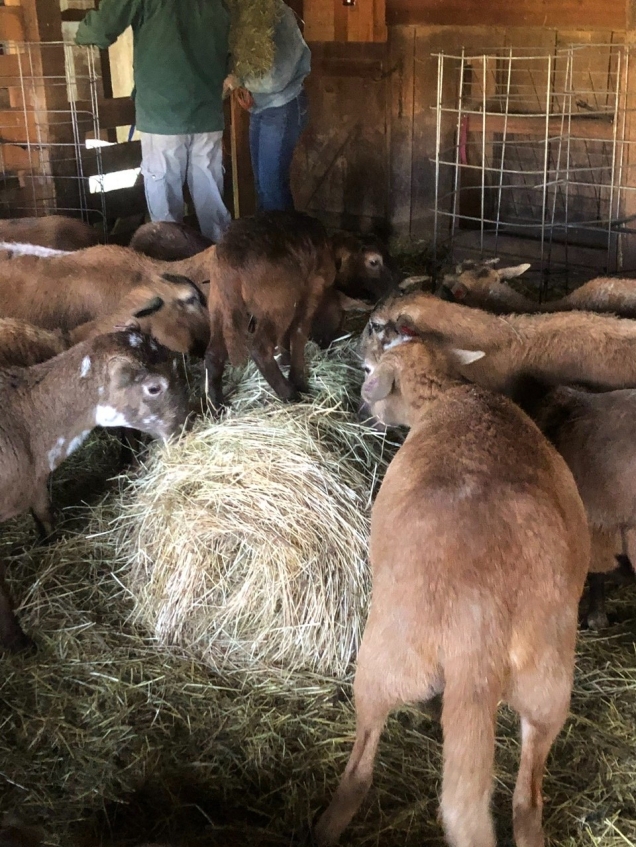