It has been a long two days already and there is one more left in the weekend.  First thing Friday and Saturday I got out of bed, made coffee and went out to spray fields.  We are trying to eradicate the star thistle and other thistles.  So I am spraying 2-4-d and Milestone on the fields and so is Mr Professional, between the two of us hopefully we will have it finished this week.  I keep running out of spray, last year we didn’t buy hardly any spray which may explain why we are spending so much this year.  I suspect we will end up with about $1500 worth of chemicals on the property, for around 70 acres.  The amount of rain we have gotten this year is causing the weeds to just keep coming out of the ground.  This has led me to the conclusion that the battery I got for the side by side is too small.  We keep having to use the external battery to jump start it.  I should have just gotten the kit that allows me to install a large marine deep cycle battery under the driver’s seat.  I will be doing that and getting a new battery that will just fit in the battery holder.  I need as much battery as I can get, even the trickle charger is not helping.

I did have to pump up the front right tire on the tractor on Friday.  I suspect I may have run over a nail.  I still need to replace the left front tire rim and both front tires are the originals and are almost 8 years old.  We now park the tractor in the machine shop but it used to sit out most of its life In the weather and sun which is reflected in the tire condition. It is time to get new ones.

Annmarie and I spent the late morning spreading out the rest of our ground cover tire bark on Friday and she took me to town to feed me lunch so we could get the rest of the parts needed to install a drip line on all the berries.  The berries and the lavender are both now on timers and drip lines.  We have about 20 bags of tire chips leftover.  I want to get the greenhouse up and use it on the floor as a heat sink.  Our wheat fields should be harvested next week.  I love the wheat when it is at this stage, I think it is at its most beautiful. 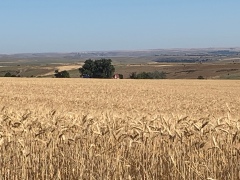 We spent Saturday morning fixing the drip lines on three herb containers in the back garden and I finished spraying the far field.  After breakfast and conversation with my mother I went out and put away the baler in the machine shed and decided to go up to the second field and dig more ditches.  The ditches I dug last week had water running in them and the surrounding ground has firmed up nicely.  I would like to move some dirt and fix all the runnels in the field that the flooding caused but there is still a pretty wet spot in the middle of the field.  My plan was to just dig some interconnecting ditches to help the water flow better.  I took flags with me and walked around the wet area and marked the borders so when it dried out I would know what was going to be super wet ground again in the spring.  I have pretty much convinced myself I am going to have to install pecker poles, some people call them vineyard poles, they are only 2” around and pressure treated.  I can drive them into the ground and they should stay for about 7 years.  I need to know where it is wet when I am cutting hay so I don’t inadvertently get out into the mud.

Why you ask would I like to avoid the mud?  Well it is wet and sometimes the bottom of the mud hole is hard to find.  I started to dig right at the top of a running waterway and got the front tires stuck.  I tried to back out and push out with the bucket but the bucket kept sinking and not finding a lot of firm ground.  I then went forward deeper into the hole and tried to pull myself forward with the bucket.  This let me get forward another three feet which put me nose down into a hole.  I was at the far end of the property and had no tools or vehicles except for two railroad ties laying over by the gates.  I had seen them there and was saving them for use later.  I hoofed it over and grabbed the first one, put it on my left should and walked the 200 feet to the tractor.  It was heavy and I could feel it digging into my skinny shoulder.  I wedged it under the front left tire and went back for the second one.  I simply could not squat down and get it up on my right shoulder, damn thing was over 100# and I was hot and tired.  So I put one end of the tie on a cross beam about three feet off the ground, lifted the other end and got under it.  I hoisted it onto my right shoulder and made it about 50 feet before saying no way and tossing it on the ground.  Mind you I think the tractor is sinking into the mud as I mess around with the railroad tie.  I grabbed a 3/8 chain I keep on the tractor and wrapped it around one end, made a yoke by hooking the other end to the tie, stepped in and started to pull it toward the tractor.  I was able to use my legs and whole body to move the railroad tie and got it to the tractor, I tossed it under the right front tire and a piece of cattle panel went under the back tires.  Nope, all this did was cause the ties to stand up when the front tires starting putting weight on them.  I needed a shovel to dig out a horizontal path for the tie. 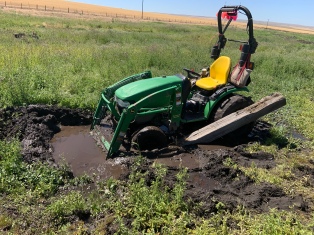 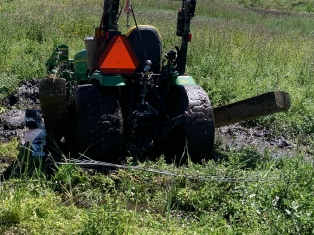 I was keeping the tractor running because when I manipulated the bucket the front end of the tractor would fall into the water submerging the exhaust pipe.  My next trick was to pull out one of the ties and lay it just in front of the bucket.  The tie was wider than the hole I made so I figured I could push off the tie with the bucket.  This may have worked but when I lifted the bucket I rolled the tie toward me. 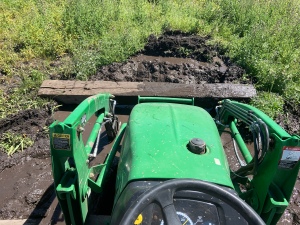 I wanted it to be in just the perfect spot, unfortunately I rolled it too close and was unable to push off of it with the bucket.  I could kinda keep the front end out of the water only.  I then took the other tie and tried to get it under the front of the tractor.  Nope, it was just sinking faster and now the exhaust pipe was fully submerged.

In desperation I jumped off the tractor and gabbed the closet railroad tie and tried to stick in under the bucket at 90 degree angle to the other tie.  I figured the bucket could easily push off of that but I was not fast enough.  I tossed it quickly as the tractor had blue smoke coming out of it and was making a funny noise.  I tried to use the bucket to push me up but had to just turn off the ignition before I sucked water into the engine.  I had managed to get stuck more than any other time in the tractor’s life or my experience.  I called a friend, Mr Richard Hemphill who came out, looked at it and went back to get a bigger tractor. 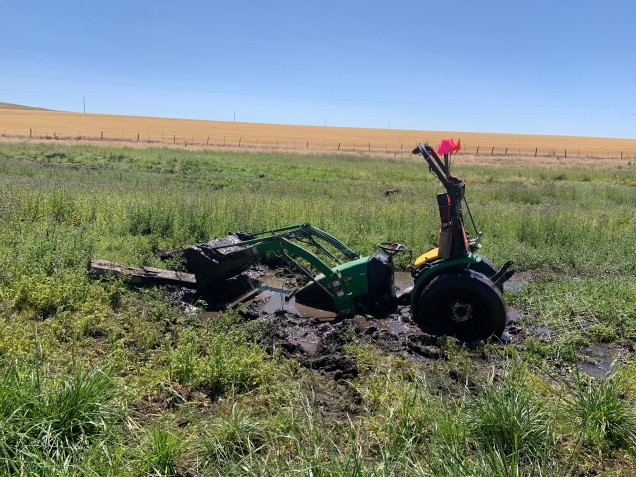 I tried to take a nap while waiting but surprisingly the ground was very warm with the sun beating down on the ground.  I gave up and drank more coffee.  The very large tractor showed up, we hooked the tow strap on and it just pulled me out of the ground!  Once out Richard said start it, I had to dig mud out of the exhaust pipe first and since the water never got to the air intake I fired it up and it started on the first try! 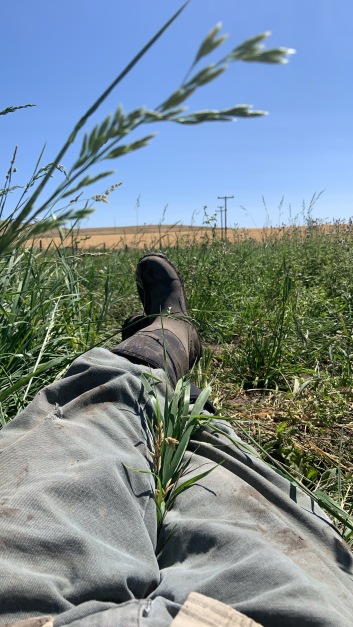 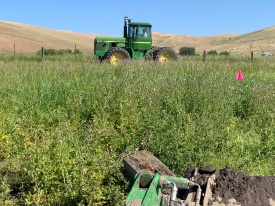 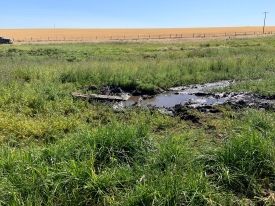 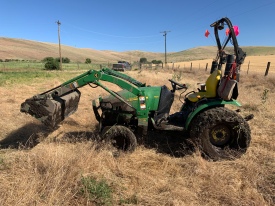 I spent over an hour with a hose getting all the mud off the tractor and out of the radiator.  There was mud caked all over the engine and both side of the radiator.  I am going to leave it to dry overnight and will move it in the morning.  I will be done with the tractor until I get new tires, the front right tire is flat again.

On the plus side, my baler part from Italy will be here in two weeks!