Last weekend we needed to work the cows again.  It seems like a never ending need but we had two more calves sneak out unexpectedly and they needed to be tagged and banded.  Mr Professional and I were going to show Annmarie and go out and just get the cows in and then she would not have to walk the entire length of the farm several times.  I opened the lower gate behind the house but did not go to the top of the fence and open the upper gate.  I didn’t think I would need to…

We walked down and pushed the cows towards our house.  They wanted to go into the orchard but we had the sheep in there so I did not want to run them through the sheep and alpaca.  We would have to sort species after that which would cause more drama, best to be avoided.  We had the cows almost to the fence and one female cow decided she was not going and bolted straight up the hill.  I had to sprint up the entire length of the hill to cut her off.  We left the dogs at the house also.  I sprinted up the hill a second time and cut her off.  The cows wanted to go in the closed upper gate.  The third time she bolted for the top again I started to sprint and just said “piss on it” and quit.  My foot had a blister and I was tired and this was obviously not working.  Annmarie came out and opened the upper gate, I went and got the dogs and we pushed them over into the field behind the house.  We again had a horrible time getting them down near the back creek.  I will need to fix the gate opening and put the new opening in the corner of the field so we can easily push the animals through.  We did get them into the barn lot and tagged a little girl and tag and banded a little boy.  The calves were small enough they were easy to handle.  Unfortunately we had a 5 month old girl that the bull kept paying too much attention.  So we had to sort her off and who we thought was momma.

The three cows above got sorted off and sent into the upper pastures with the other isolated cows.  No bull up there.  Annmarie pointed out another problem after we sorted them off.  The old green tag cow that she wanted to make into hamburger and we sorted off early to prevent her from getting pregnant is very pregnant.  So now she is going to have another calf and avoid the dinner table for another year.

We had the dogs out chasing cows with us and since this entire process took four hours they were “dog tired” afterwards.  Kittens were spotted down in the blackberry bushes hanging out. 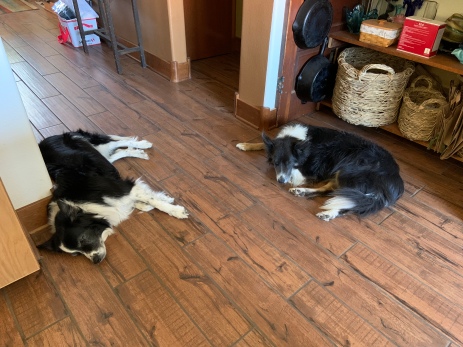 This week after work we set up the storage shelves and made a spot for a very large toolbox and the welding job box.  The welding tables also got moved around to the front of the machine shop.  Once all the tools get put away the drawers will get labeled and I will bring out a grinding wheel/wire brush combo and bolt it down to the table.  We should be able to manufacture about 80% of our needed things.  It’s just that I hate getting organized.  I ended up getting bins and each piece of equipment is going to have a bin of new parts.  This is necessary when all of your hay equipment is made in Italy.