Mr Professional had a major score this week, we was working on a different project and spotted a pile of solid concrete blocks and bricks for sale in Pendleton.  He messaged me as I am always on the lookout for a great deal and you never know when you might need a large load of brick and blocks.  We got the whole thing for $250, about 20,000 lbs of block and brick!  It took us two loads with the pickup and trailer and a paltry seven hours to load both loads and unload the first load.  At midnight when we got home we had already moved 30k pounds of block and I was done, I was not going to move any more block.  Two more attempts got all the brick and block neatly stacked at our house and ready for a project.  I am going to use some of the block to make a concrete waterway in the barn lot.  I will use the blocks to line the bottom of the spring where it goes between the cinder block stairs so the animals will have access to clean running water and no weeds will build up where they drink.  I am also thinking about a brick archway leading to our house out by the cars.  This will let me put in a custom gate and anchor it to the brick pillar which will be filled with concrete and rebar.  This is a future plan and is way behind many others that need to happen first.

I have spent the last two Sundays picking blackberries.  You can tell that some of our plants are in with the animals as they clean up the bushes.  This works well for me as there is not a lot of bending over to pick blackberries.  The first Sunday I was able to get 2 gallons off of the first bush.  Today I had to pick 3 quarts on the first bush and go up and pick the other five on two other bushes.  We have enough for 12 pies and I froze some in little snack packs for Annmarie to use in her breakfast smoothie, raw egg, fresh fruit, frozen fruit, Greek vanilla yogurt. 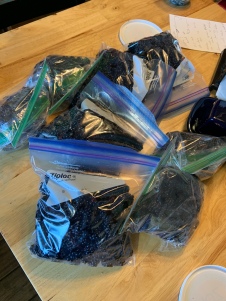 Annmarie has started to clean up our alpaca fiber.  She is picking the organic matter, weeds, out of the fleece so we can send it off for processing.  It will cost us $25/lb to have it processed into yarn.  She is shaking the dirt out and pulling out the hair mats.  She is not the only one who appreciates the alpaca fiber.  Gizmo thinks it is quite soft and has been trying to steal parts of it to use in making up his bed.  He sleeps inside a deep hole in the yard that Mouse dug and he managed to steal some scraps and drag them into his hole.  Here he just plopped down on the fiber to be cleaned.  We are packaging it in large vacuum bags so we can get the bulk down and try and only ship it as weight.  The fleece takes up a large amount of space even though it is not very heavy.  So far we have not had to use the vacuum on the bags yet but I am hoping to get 4-6 fleeces into each bag.  I would like to send 20# boxes.  We will see how it goes, as it takes her about three hours for each fleece and we have about 20-23 to process.  She has done four in the last week after she made the skirting table.

I tried to go up to the old barley field that I cut last week and rake it for hay.  No go, I spent almost two hours trying to rake it to get a pile I could run the baler over and only ended up with two rows.  It is not worth the effort and I just quit.  We will go up and kill the entire field so it can be turned over and cleaned up and replanted this fall.  I want to replant field number 4 also and part of 3.  I need to go buy grass seed soon as everyone always runs out by late fall.

I did get all new tires for the flatbed trailer and will be picking up hay.  I also got two new tires for the horse trailer as the spare was flat and another one blew up with the trailer parked on one of our 105 degree days.  I was going to get the new tractor rim changed over but it turns out they sold me a 15” rim and I needed a 12” rim so I will be taking that back.  The tire shop also managed to get a oil change done on the pickup at the same time!