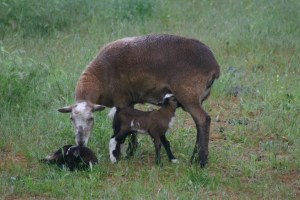 This morning I had to go in early to administer an exam for another instructor, so I absolutely had to be out the door no later than 7:30. I was rushing out the door with 15 minutes to spare and happened to glance over at the sheep, and what did I see, but a little sheep standing next to that ewe I thought was ready to deliver about six weeks ago. I was only off by a little (in the grand scheme of things, anyway). Yes, I came back in and threw on some boots so I could check on the lamb. They were fine. Momma had done a good job drying them off, even though they couldn’t have been more than a couple of hours hold (their cords were still wet). They were both warm, and had full tummies, so they’d had their first meals too. I tried to entice her into a pen with them, but she wasn’t having any of it. I had to go to work, so I changed my shoes (again) and hoped for the best. Of course, it rained cats and dogs all day, and was only in the mid-fifties, so I worried all day long, and immediately went out as soon as I got home. The only thing wrong was that one of the babies had gotten stuck under the barn, probably because Momma had tried to tuck them up next to the barn to stay dry.

I really wanted to get them into the shed and out of the weather, so I had the kids help me with thinking that if we took the lambs, Momma would follow. Not so. She refused to leave the pasture where she had given birth, apparently convinced that her lambs were still there. I tried to encourage her out, but she just got more and more panicked. The lambs are still warm, and are only wet on the topmost layer, so I decided they must be fine, and Momma won. I did move the feeder over so they can’t get stuck (hopefully) under the barn again. They are shown in the photo still in their pasture. You can see the little black one laying down. This one looks an awful lot like Hershey. The other one is getting a snack, and is very pretty. I haven’t checked gender yet, and haven’t even considered names. Momma is very attentive and is doing a great job. I’m sure more photos will come.