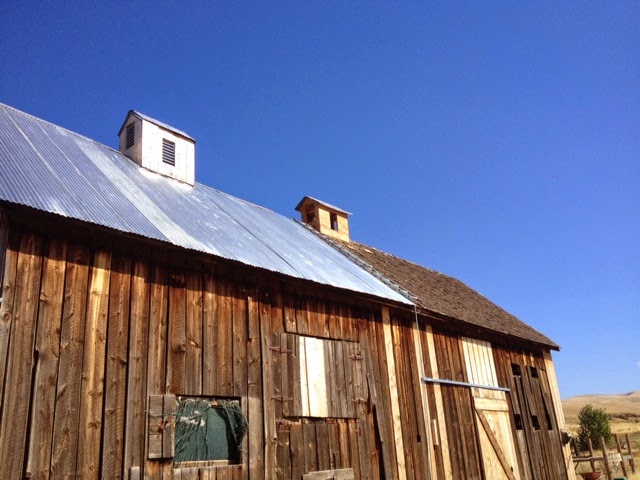 I was sure Wednesday would be the day we finished the cupola!  Mr. President came over at 0800 and we spent two hours finishing the siding assembly inside the barn.  We finished cutting the metal flashing that goes under the siding and then disassembled the entire thing into neat little piles laid out all over the barn. We managed to get that 30 foot ladder in place on the roof, not a one person job.  I had two different screw bags and had belted myself into the safety harness.  I decided to install the long sides first.  They weigh around eighty pounds and had to be carried up to the roof then drug up roof.  The worst part was trying to hold it in place while standing on those two little toe hold boards.  It kept trying to slide down while I was holding it in place and trying to not fall off the roof.  I got both long sides installed then installed four 2x4s across the top, side to side.  It was a good thing as the top had to be spread out almost two inches. The ends were relatively easy as they only weighed half of a long side.  Once all the sides were anchored together I put on the roof.  I stand in the vent holes to reach up onto roof.  I then installed the tin roof and peak vent.  I was drinking water like crazy and felt my brains cooking. The ambient temperature was 95 degrees and on top of the roof was 10-15 degrees warmer.  I called it good once the roof was installed.  I crawled off roof and there was no way I was going back up. So it is still not done.  We have 13 hrs into the current cupola alone, but this is a good thing.  The first one took 40 hours to complete and was done on the rooftop, piece by piece.  I am hoping a few hours on Monday will see us finished and back onto tinning the main roof.  I expect to be done in a few days and can move back into some fencing upgrades and a few gates.
On a very good note the upper prime squared pasture has been disced under and is going to be ready for hay planting next year.  This will give us plenty of hay next winter.  Annmarie calculated that we need to separate out the baby calves in November so they can be kept away from the bull for six months. We will wean the two heifers and one neutered male all at the same time.  Next year we will breed the heifers. Things are starting to go in the right direction with the animals.